late 14c., crasen, craisen "to shatter, crush, break to pieces," probably a Germanic word and perhaps ultimately from a Scandinavian source (such as Old Norse *krasa"shatter"), but it seems to have entered English via Old French crasir (compare Modern French écraser). Original sense preserved in crazy quilt (1886) pattern and in reference to cracking in pottery glazing (1815).

Mental sense of "derange the intellect of, make insane" (late 15c.)  perhaps comes via the transferred sense of "be diseased or deformed" (mid-15c.), or it might be an image of cracked or broken things. The intransitive sense of "become insane" is by 1818.  Related: Crazed; crazing.

... there is little assurance in reconciled enemies: whose affections (for the most part) are like unto Glasse; which being once cracked, can neuer be made otherwise then crazed and vnsound. [John Hayward, "The Life and Raigne of King Henrie the IIII," 1599]

late 15c., "break down in health," from craze (v.) in its Middle English sense of "to shatter, break to pieces." In 16c. also "a flaw, a defect, an infirmity." Perhaps via a notion of "mental breakdown," by 1813 the sense was extended to "mania, irrational fancy, fad," or, as The Century Dictionary defines it, "An unreasoning or capricious liking or affectation of liking, more or less sudden and temporary, and usually shared by a number of persons, especially in society, for something particular, uncommon, peculiar, or curious ..." [1897].

To drive (someone) crazy is attested by 1873. To do something like crazy "with manic vigor or frequency" is by 1905. Phrase crazy like a fox has origins by 1935. Crazy Horse, name of the Teton Lakhota (Siouan) war leader (d. 1877), translates thašuka witko, literally "his horse is crazy." Crazy-quilt (1886) preserves the original "break to pieces" sense of craze (v.). Crazy bone as an alternative to funny bone is recorded by 1853.

debuted in U.S. 1963 and was a craze on some college campuses for a few years thereafter. Said to have been designed c. 1930s in Switzerland. The name is presumably from the pronunciation of Fußball, the German form of (Association) football.

traditional dance of Hawaii, 1825, from Hawaiian. As a verb from 1952. Hula hoop first recorded in fall of 1958, when it was a craze; so called from resemblance of motions of one using it to the dancers' hip circles.

1834, "hobby, pet project" (adjective faddy is from 1824), of uncertain origin. Perhaps shortened from fiddle-faddle. Or perhaps from French fadaise "trifle, nonsense," which is ultimately from Latin fatuus "stupid." From 1881 as "fashion, craze," or as Century Dictionary has it, "trivial fancy adopted and pursued for a time with irrational zeal."

1773, "lively square dance for four couples," consisting regularly of five complete parts, from French quadrille (17c.), originally one of four groups of horsemen in a tournament (a sense attested in English from 1738), from Spanish cuadrilla, diminutive of cuadro "four-sided battle square," from Latin quadrum "a square," related to quattuor "four" (from PIE root *kwetwer- "four"). The craze for the dance hit England in 1816, and it underwent a vigorous revival late 19c. among the middle classes.

Earlier it was the name of a popular card game for four hands, and in this sense it is from French quadrille (1725), from Spanish cuartillo, from cuarto "fourth," from Latin quartus. OED notes it as fashionable ("and was in turn superseded by whist") from 1726, the year of Swift's (or Congreve's) satirical ballad on the craze:

The commoner, and knight, the peer,

Men of all ranks and fame,

Leave to their wives the only care,

To propagate their name;

And well that duty they fulfil

When the good husband's at Quadrille &c.

1915, apparently from a language of the Philippines. Registered as a trademark in Vancouver, Canada, in 1932, the year the first craze for them began (subsequent fads 1950s, 1970s, 1998). The toy itself is much older and was earlier known as bandalore (1802), a word of obscure origin, "but it was from American contact in the Philippines that the first commercial development was established" [Century Dictionary]. Figurative sense of any "up-and-down movement" is first recorded 1932. Meaning "stupid person" is recorded from 1970. The verb in the figurative sense is attested from 1967. 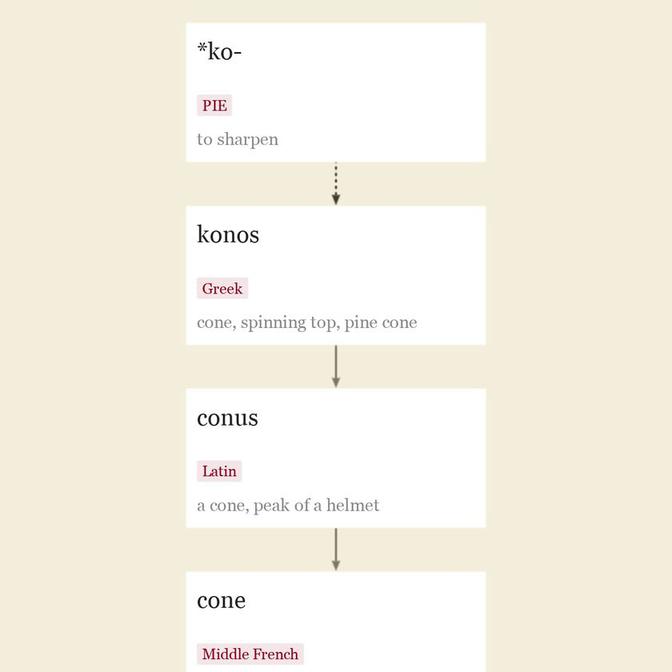