1507, "the western hemisphere, North and South America," in Cartographer Martin Waldseemüller's treatise "Cosmographiae Introductio," from Modern Latin Americanus, after Amerigo Vespucci (1454-1512) who made two trips to the New World as a navigator and claimed to have discovered it. His published works put forward the idea that it was a new continent, and he was first to call it Novus Mundus "New World." Amerigo is more easily Latinized than Vespucci (Latin Vesputius, which might have yielded place-name Vesputia). The sense in English naturally was restricted toward the British colonies, then the United States.

The man's name Amerigo is Germanic, said to derive from Gothic Amalrich, literally "work-ruler." The Old English form of the name has come down as surnames Emmerich, Emery, etc. The Italian fem. form merged into Amelia.

Colloquial pronunciation "Ameri-kay," not uncommon 19c., goes back to at least 1643 and a poem that rhymed the word with away. Amerika "U.S. society viewed as racist, fascist, oppressive, etc." is attested from 1969; the spelling is German but may also suggest the KKK.

It is a thousand pities that the puny witticisms of a few professional objectors should have the power to prevent, even for a year, the adoption of a name for our country. At present we have, clearly, none. There should be no hesitation about "Appalachia." In the first place, it is distinctive. "America" is not, and can never be made so. We may legislate as much as we please, and assume for our country whatever name we think right — but to use it will be no name, to any purpose for which a name is needed, unless we can take it away from the regions which employ it at present. South America is "America," and will insist upon remaining so. [Edgar Allan Poe, "Marginalia," in Graham's Magazine, Philadelphia, December 1846]

FREDONIA, FREDONIAN, FREDE, FREDISH, &c. &c. These extraordinary words, which have been deservedly ridiculed here as well as in England, were proposed sometime ago, and countenanced by two or three individuals, as names for the territory and people of the United States. The general term American is now commonly understood (at least in all places where the English language is spoken,) to mean an inhabitant of the United States; and is so employed, except where unusual precision of language is required. [John Pickering, "A Vocabulary, or Collection of Words and Phrases Which Have Been Supposed to be Peculiar to the United States of America," Boston, 1816] 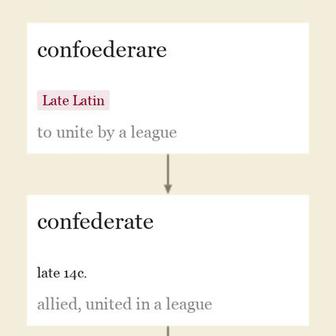 late 14c., "allied, united in a league," from Late Latin confoederatus "leagued together," past participle of confoederare "to unite by a league" (see confederate (v.)). Meaning "of or belonging to the Confederate States of America" is from 1861. Confederal "of or pertaining to a confederation" (1782) was used of the United States under the Articles of Confederation. 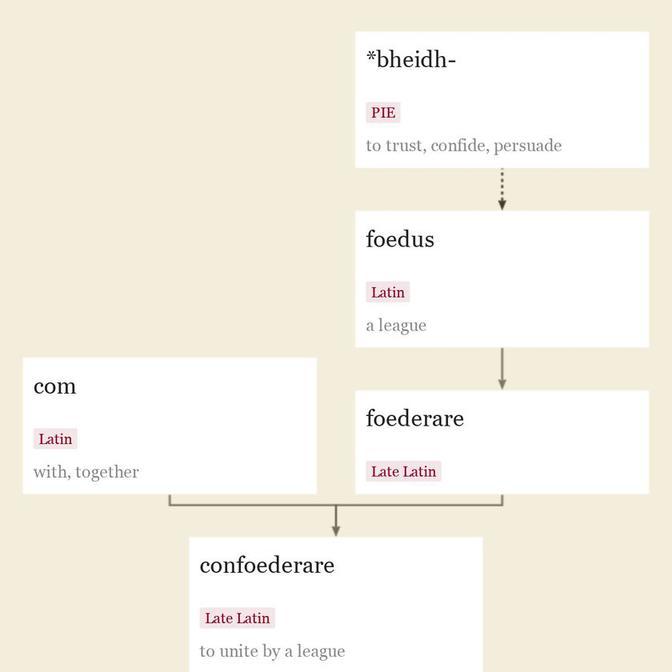 1530s, "to unite in a league or alliance," from Late Latin confoederatus, past participle of confoederare "to unite by a league," from assimilated form of com "with, together" (see con-) + foederare, from foedus (genitive foederis) "a league," from suffixed form of PIE root *bheidh- "to trust, confide, persuade." 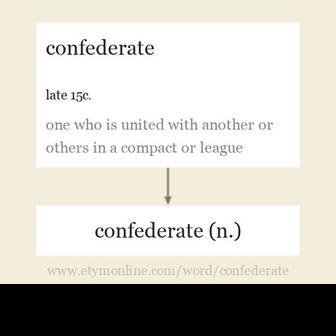 late 15c., "one who is united with another or others in a compact or league;" see confederate (adj.).  Late Latin confoederatus also was used as a noun in its day. Meaning "a citizen of the Confederate States of America" is from 1861. Confederator (mid-15c.) was used in the sense of "an ally, an accomplice."

Latin, "(with) God (as our) defender," national motto of the Confederate States of America, from ablative of Deus "God" (see Zeus) + ablative of present participle of  vindicare "to liberate; to act as avenger; protect, defend" (see vindication).

late 14c., "contract between two or more persons, states, etc., for mutual support or joint action," from Anglo-French confederacie (Old French confederacie), from stem of Latin confoederare "to unite by a league," from assimilated form of com "with, together" (see con-) + foederare, from foedus "a league" (from suffixed form of PIE root *bheidh- "to trust, confide, persuade").

Also late 14c. as "an aggregation of persons, states, etc., united by a league, a confederation. At first in reference to leagues of classical Greek states (Aetolian, Delian, Achaean, etc.), later of the Netherlands. In 17c.-18c. often in a bad sense, especially "a conspiracy against a superior."

Confederacy now usually implies a looser or more temporary association than confederation, which is applied to a union of states organized on an intentionally permanent basis. [OED]