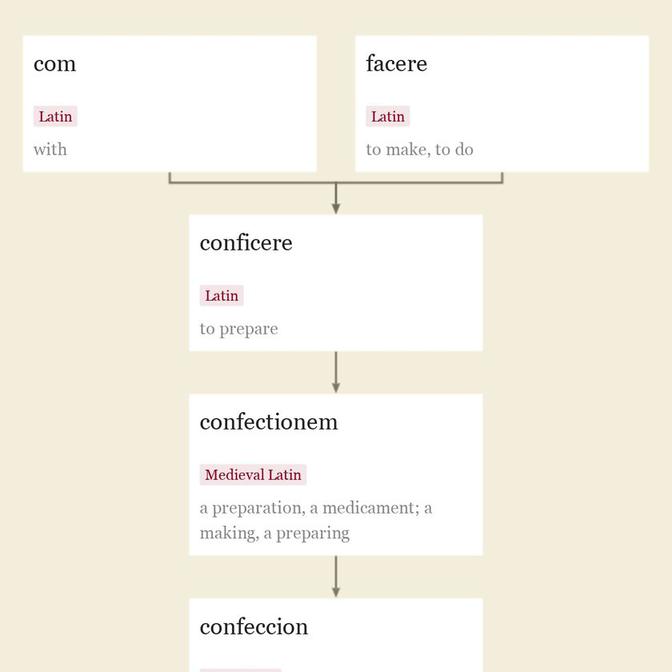 mid-14c., confescioun, confeccioun, "anything prepared by mixing ingredients," from Old French confeccion (12c., Modern French confection) "drawing up (of a treaty, etc.); article, product," in pharmacology, "mixture, compound," from Medieval Latin confectionem (nominative confectio) "a preparation, a medicament," in classical Latin, "a making, a preparing," noun of action from past-participle stem of conficere "to prepare," from assimilated form of com "with" (see con-) + combining form of facere "to make, to do" (from PIE root *dhe- "to set, put").

From early 15c. as "the making by means of ingredients, art or act of compounding different substances into one preparation." In late 14c. also "something prepared or made with sugar or syrup;" sense of "candies, bonbons, light pastry" predominated from 16c.

1590s, "one who makes confectionery," agent noun from confection. From c. 1600 as "one who compounds preparations of drugs."

early 15c., confit, "sugarplum, sugary sweet, type of fruit or root preserved with sugar and dried," from Old French confit "preserved fruit," from Latin confectum, from confectionem, noun use of confectus, past participle of conficere "to prepare" (see confection). Forms with -m- appear from mid-15c.

1815, "small pellets made of lime or soft plaster, used in Italy during carnival by the revelers for pelting one another in the streets," from Italian plural of confetto "sweetmeat," via Old French, from Latin confectum, confectus (see confection).

The little balls (which left white marks) were substitutes for the small sugar-plum candies that traditionally were thrown during Italian carnivals; the custom was adopted in England by early 19c. for weddings and other occasions, with symbolic tossing of little bits of paper (which are called confetti by 1846).

The chief amusement of the Carnival consists in throwing the confetti—a very ancient practice, and which, with a little research, may be traced up through the Italian Chronicles to the time of the Romans. The confetti were originally of sugar, and the nobility still pique themselves on adhering to so costly a material. The people have degraded them to small balls of lime, which allows more sport, and takes in a much greater number of combatants. [Dr. Abraham Eldon, "The Continental Traveller's Oracle; or, Maxims for Foreign Locomotion," London, 1828]

[The Roman ladies] are generally provided with a small basket of confetti, and as their acquaintance and admirers pass in review, they must be prepared to receive a volley of them. It is thought quite the supreme bon ton for a Roman beau, to mark how many distinguished beauties he is in favour with, by having both his coat and hat covered as white as a miller with the flour of these confetti. [John Bramsen, "Letters of a Prussian Traveller," 1818]

1727, prawlin, "confection made of almonds stirred into boiling sugar and water," from French praline (17c.), from the name of Marshal Duplessis-Praslin (1598-1675, pronounced "praline"), "whose cook invented this confection" [Klein]. Modern spelling in English from 1809. The name was transferred 19c. to other similar preparations.