1859, American English, "saddle-girth," from Spanish cincha "girdle," from Latin cingulum "a girdle, a swordbelt," from cingere "to surround, encircle," from PIE root *kenk- (1) "to gird, encircle" (source also of Sanskrit kankate "binds," kanci "girdle;" Lithuanian  kinkau, kinkyti "to harness horses"). Replaced earlier surcingle. Sense of "an easy thing" is 1895 (in lead-pipe cinch), via notion of "a firm or sure hold" (1888).

"belt, girdle, or band worn round the body," 1580s, from Latin cinctura "a girdle," from cinctus, past participle of cingere "to surround, encircle" (see cinch (n.)). Especially the girdle used to confine a clergyman's cassock. The verb is recorded from 1757 (implied in cinctured).

c. 1400, prasaynt (mid-15c. as precincte), "district defined for purposes of government or representation," especially in a city or town, from Medieval Latin precinctum "enclosure, boundary line," noun use of neuter past participle of Latin praecingere "to gird about, surround," from prae "before" (see pre-) + cingere "to surround, encircle" (see cinch (v.)). The meaning "exterior line or boundary encompassing a place" is from 1540s. 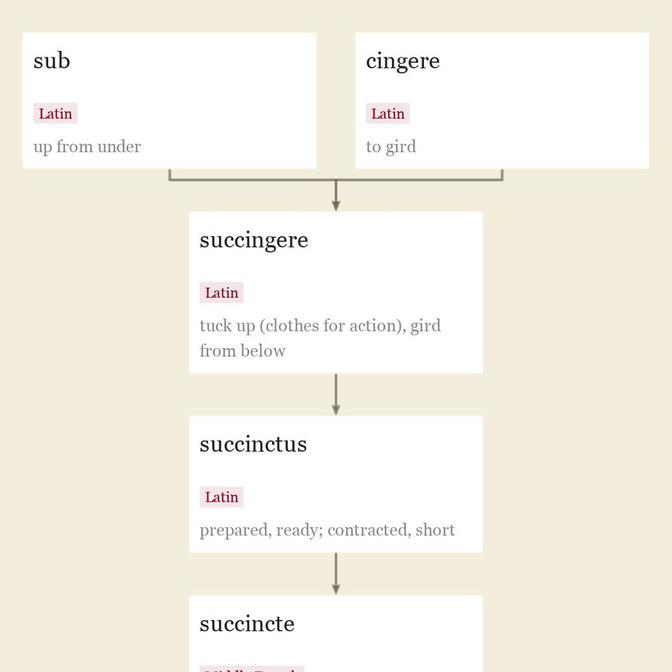 "inflammatory disease of the skin," late 14c., from Medieval Latin cingulus, a variant of Latin cingulum "girdle," from cingere "to gird" (see cinch (n.)). The medical use of the word in Medieval Latin is a loan-translation of Greek zōstēr, literally "girdle." The inflammation was so called because it often extends around the middle of the body, like a girdle. Perhaps it was reinforced in English by the plural of French cengle "shingles," literally "belt, fence," from the same Latin word.

c. 1300, "cinch on a nail;" c. 1400, "short metal pin or bolt inserted through a hole at the junction of two or more metal pieces," the point then hammered broad to hold them together; from Old French rivet "nail, rivet," from river "to clench, fix, fasten," which is of uncertain origin; possibly from Middle Dutch wriven "turn, grind," and thus related to rive (v.). Or the English word might be directly from Middle Dutch.