late 14c., "gaping void; empty, immeasurable space," from Old French chaos (14c.) or directly from Latin chaos, from Greek khaos "abyss, that which gapes wide open, that which is vast and empty" (from *khnwos, from PIE root *ghieh- "to yawn, gape, be wide open").

The meaning "utter confusion" (c. 1600) is an extended sense from theological use of chaos in the Vulgate version of "Genesis" (1530s in English) for "the void at the beginning of creation, the confused, formless, elementary state of the universe." The Greek for "disorder" was tarakhē, but the use of chaos here was rooted in Hesiod ("Theogony"), who describes khaos as the primeval emptiness of the Universe, and in Ovid ("Metamorphoses"), who opposes Khaos to Kosmos, "the ordered Universe." Sometimes it was personified as a god, begetter of Erebus and Nyx ("Night").

Meaning "orderless confusion" in human affairs is from c. 1600. Chaos theory in the modern mathematical sense is attested from c. 1977.

1713, "in a state of primordial chaos," irregularly formed in English from chaos + -ic, probably on model of eros/erotic, demos/demotic, hypnos/hypnotic, etc. The transferred or figurative meaning "confused, disordered" is from 1747. Related: Chaotically.

1650s, from Dutch gas, probably from Greek khaos "empty space" (see chaos). The sound of Dutch "g" is roughly equivalent to that of Greek "kh." First used by Flemish chemist J.B. van Helmont (1577-1644), probably influenced by Paracelsus, who used khaos in an occult sense of "proper elements of spirits" or "ultra-rarified water," which was van Helmont's definition of gas.

digraph used in Old French for the "tsh" sound. In some French dialects, including that of Paris (but not that of Picardy), Latin ca- became French "tsha." This was introduced to English after the Norman Conquest, in words borrowed from Old French such as chaste, charity, chief (adj.). Under French influence, -ch- also was inserted into Anglo-Saxon words that had the same sound (such as bleach, chest, church) which in Old English still was written with a simple -c-, and into those that had formerly been spelled with a -c- and pronounced "k" such as chin and much.

As French evolved, the "t" sound dropped out of -ch-, so in later loan-words from French -ch- has only the sound "sh-" (chauffeur, machine (n.), chivalry, etc.).

It turns up as well in words from classical languages (chaos, echo, etc.). Most uses of -ch- in Roman Latin were in words from Greek, which in Greek would be pronounced correctly as /k/ + /h/, as in modern blockhead, but most Romans would have said merely /k/, and this was the regular pronunciation in English. Before c. 1500 such words were regularly spelled with a -c- (Crist, cronicle, scoole), but Modern English has preserved or restored the etymological spelling in most of them (chemical, chorus, monarch).

Sometimes ch- is written to keep -c- hard before a front vowel, as still in modern Italian. In some languages (Welsh, Spanish, Czech) ch- can be treated as a separate letter and words in it are alphabetized after -c- (or, in Czech and Slovak, after -h-). The sound also is heard in words from more distant languages (as in cheetah, chintz), and the digraph also is used to represent the sound in Scottish loch. 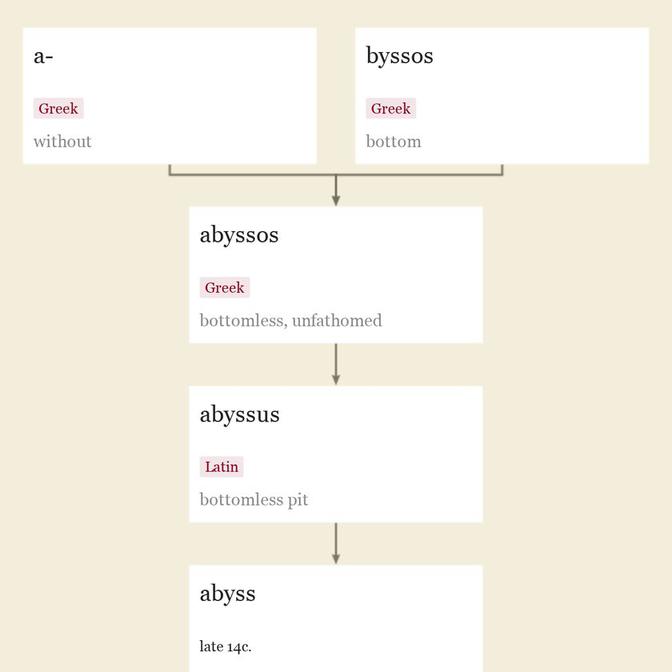 late 14c. in Latin form abyssus, "depths of the earth or sea; primordial chaos;" early 14c. as abime "depths of the earth or sea; bottomless pit, Hell" (via Old French; see abysm). Both are from Late Latin abyssus "bottomless pit," from Greek abyssos (limnē) "bottomless (pool)," from abyssos "bottomless, unfathomed," hence, generally, "enormous, unfathomable," also as a noun, he abyssos "the great depth, the underworld, the bottomless pit." This is a compound of a- "without" (see a- (3)) + byssos "bottom," a word of uncertain origin possibly related to bathos "depth" [Liddell & Scott]. Watkins suggests a connection with the root of bottom (n.); Beekes suggests it is pre-Greek.

also sans-culotte, "lower-class republican of the French Revolution," 1790, from French, literally "without breeches;" see sans + culottes. This usually is explained as referring to the class whose distinctive costume was pantalons (long trousers) as opposed to the upper classes, which wore culottes (knee-breeches), but this is not certain. Whatever the origin, the name was embraced from the start by the revolutionists of Paris. Related: Sansculottes; sansculotterie; sansculottic; sansculottism. "opinions and principles of the sancullotes."

Unhappy Friends of Freedom ; consolidating a Revolution ! They must sit at work there, their pavilion spread on very Chaos ; between two hostile worlds, the Upper Court-world, the nether Sansculottic one ; and, beaten on by both, toil painfully, perilously,—doing, in sad literal earnest, 'the impossible.' [Carlyle, "The French Revolution"]

In Middle English and as late as 17c., it was a generic term for all fruit other than berries but including nuts (such as Old English fingeræppla "dates," literally "finger-apples;" Middle English appel of paradis "banana," c. 1400). Hence its grafting onto the unnamed "fruit of the forbidden tree" in Genesis.

As far as the forbidden fruit is concerned, again, the Quran does not mention it explicitly, but according to traditional commentaries it was not an apple, as believed by Christians and Jews, but wheat. [Seyyed Hossein Nasr, "The Heart of Islam: Enduring Values for Humanity," 2002]

Apple of Discord (c. 1400) was thrown into the wedding of Thetis and Peleus by Eris (goddess of chaos and discord), who had not been invited, and inscribed kallisti "To the Prettiest One." Paris, elected to choose which goddess should have it, gave it to Aphrodite, offending Hera and Athene, with consequences of the Trojan War, etc.

Apple of one's eye (Old English), symbol of what is most cherished, was the pupil, supposed to be a globular solid body. Apple-polisher "one who curries favor" first attested 1928 in student slang. The image in the phrase upset the apple cart "spoil the undertaking" is attested from 1788. Road-apple "horse dropping" is from 1942.