early 15c., cripte, "grotto, cavern," from Latin crypta "vault, cavern," from Greek krypte "a vault, crypt" (short for krypte kamara "hidden vault"), fem. of kryptos "hidden," verbal adjective from kryptein "to hide," which is of uncertain origin. Comparison has been made to Old Church Slavonic kryjo, kryti "to hide," Lithuanian kráuti "to pile up." Beekes writes that krypto "is formally and semantically reminiscent of [kalypto]; the verbs may have influenced each other." For this, see calypto-. But he adds, "However, since there is no good IE etymology, the word could be Pre-Greek." Meaning "underground burial vault or chapel in a church" is attested by 1789.

The Peak, the prominent hill in Derbyshire, England, is older than the word for "mountaintop;" compare Old English Peaclond, for the district, Pecsaetan, for the people who settled there, Peaces ærs for Peak Cavern. In this case it is sometimes said to be a reference to an elf-denizen Peac "Puck." 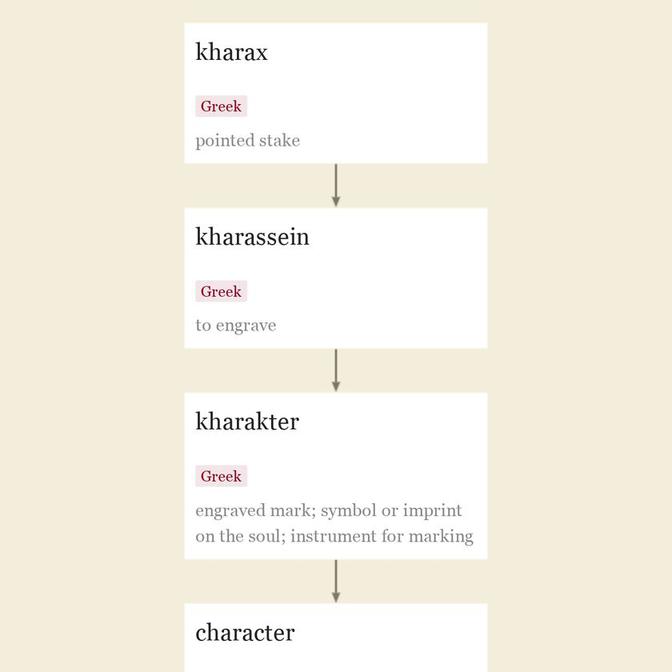 The meaning of Greek kharaktēr was extended in Hellenistic times by metaphor to "a defining quality, individual feature." In English, the meaning "sum of qualities that define a person or thing and distinguish it from another" is from 1640s. That of "moral qualities assigned to a person by repute" is from 1712.

You remember Eponina, who kept her husband alive in an underground cavern so devotedly and heroically? The force of character she showed in keeping up his spirits would have been used to hide a lover from her husband if they had been living quietly in Rome. Strong characters need strong nourishment. [Stendhal "de l'Amour," 1822]

Sense of "person in a play or novel" is first attested 1660s, in reference to the "defining qualities" he or she is given by the author. Meaning "a person" in the abstract is from 1749; especially "eccentric person" (1773). Colloquial sense of "chap, fellow" is from 1931. Character-actor, one who specializes in characters with marked peculiarities, is attested from 1861; character-assassination is from 1888; character-building (n.) from 1886.