1530s, "reversal of what is expected" (especially a fatal turning point in a drama, the winding up of the plot), from Latin catastropha, from Greek katastrophē "an overturning; a sudden end," from katastrephein "to overturn, turn down, trample on; to come to an end," from kata "down" (see cata-) + strephein "turn" (from PIE root *streb(h)- "to wind, turn"). The extension to "sudden disaster" is attested from 1748.

as a geological or biological theory (opposed to uniformitarianism), 1869, coined by T.H. Huxley from catastrophe + -ism. Related: Catastrophist.

By CATASTROPHISM I mean any form of geological speculation which, in order to account for the phenomena of geology, supposes the operation of forces different in their nature, or immeasurably different in power, from those which we at present see in action in the universe. [Huxley, "Address" to the Geological Society of London, Feb. 19, 1869]

It is the hypothetical source of/evidence for its existence is provided by: Greek strophe "stanza," originally "a turning," strephein "to turn," strophaligs "whirl, whirlwind," streblos "twisted," stremma "that which is twisted." 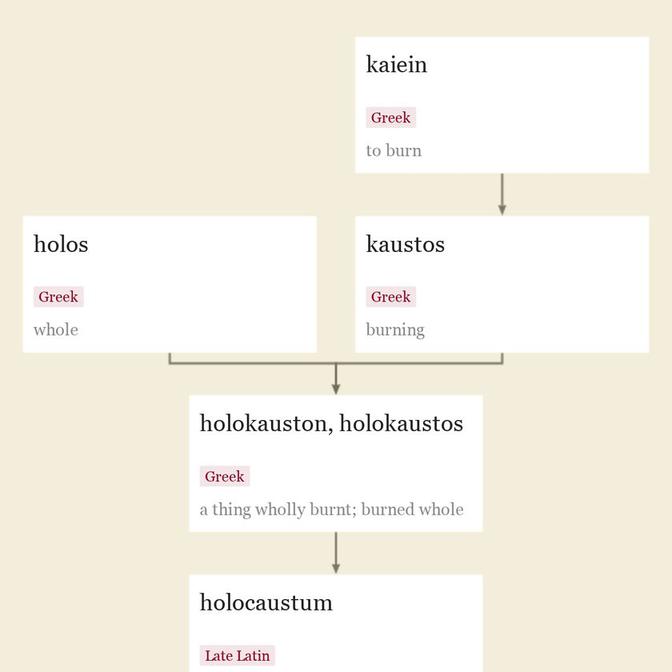 The current story in antiquity was that Aeschylus had been killed near Gela in Sicily by a tortoise dropt on his head by an eagle, which mistook the bald shiny pate of the venerable poet for a stone, and hoped to smash the tortoise on it. See Biographi Graeci, ed. Westermann, p. 120 ; Aelian Nat. Anim. vii. 16 ; Suidas, s.v. Αίσχύλοσ ; Valerius Maximus, ix. 12. Ext. 2. This important topic has produced the usual crop of learned dissertations. The late Professor F. G. Welcker gravely discussed it by the help of ornithological information derived from Aesop's fables, notes of travel made by the professor himself on the supposed scene of the catastrophe, and statistics as to the number of bald-headed men in antiquity. The interesting inquiry has since been prosecuted by other scholars with equal judgment and learning. The reader who desires to peruse these ponderous lucubrations should consult Rheinisches Museum, N.F. 7 (1850), pp. 139-144, 285 sq ; id., 9 (1854), pp. 148-155, 160* ; id., 37 (1882), pp. 308-312 ; Fleckeisen's Jahrbücher, 26 (1880), pp. 22-24 ; Welcker, Antike Denkmäler, 2. pp. 337-346. [J.G. Frazer, notes to Pausanias's "Description of Greece," 1898]

In English it meant "olive oil" exclusively till c. 1300, when the word began to be extended to any fatty, greasy liquid substance (usually flammable and insoluble in water). Often especially "oil as burned in a lamp to afford light" (as in midnight oil, symbolizing late work). Use for "petroleum" is recorded from 1520s but not common until 19c.

The artist's oils (1660s), short for oil-color (1530s), are paints made by grinding pigment in oil; oil-painting "art or craft of painting in oils" is by 1690s.  The ocean-going oil-tanker is from 1900; oil-spill in the environmental catastrophe sense is by 1924. As a condiment, oil and vinegar is attested from 1620s. The figurative expression pour oil upon the waters "appease strife or disturbance" is by 1840, from an ancient trick of sailors.

Another historical illustration which involves monolayers, was when sailors poured oil on the sea in order to calm 'troubled waters' and so protect their ship. This worked by wave damping or, more precisely, by preventing small ripples from forming in the first place so that the wind could have no effect on them. [J. Lyklema, "Fundamentals of Interface and Colloid Science," Academic Press, 2000]

The phenomenon depends on what are called Marangoni effects; Benjamin Franklin experimented with it in 1765.