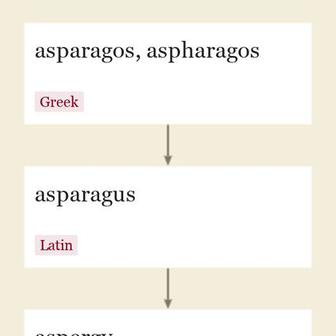 plant cultivated for its edible shoots, late 14c., aspergy; earlier sparage (late Old English), from Latin asparagus (in Medieval Latin often in the form sparagus), from Greek asparagos/aspharagos, which is of uncertain origin; perhaps with euphonic a- + PIE root *sp(h)er(e)g- "to spring up," but Beekes suggests "it is rather a substrate word," based in part on the p/ph variation.

In Middle English, asperages sometimes was regarded as a plural, with false singular aspergy. By 16c. the word had been Englished as far as sperach, sperage. The classical Latin form of the word is attested in English from mid-16c., but was limited at first to herbalists and botanists; the common form from 17c.-19c. was the folk-etymologized variant sparrowgrass, during which time asparagus had "an air of stiffness and pedantry" [John Walker, "Critical Pronouncing Dictionary," 1791]. Known in Old English as eorðnafela. Related: Asparaginous.

"In his daily and ordinary talke cetaine phrases he had which hee used very often and significantly [...] To expresse the speedy expedition of a thing done hastily, Quicker, would he say, than SPARAGES can be sodden." [Philemon Holland, "The Historie of Tvvelve Caesars Emperours of Rome," 1606]

commercial name of an artificial sweetener, 1973, from aspartic acid (1836), formed irregularly from asparagine (1813, earlier in French), a crystalline compound found in asparagus, beet-root, etc., which was named from asparagus + chemical suffix -ine (2). The -ame is perhaps because aspartamine is an amide.