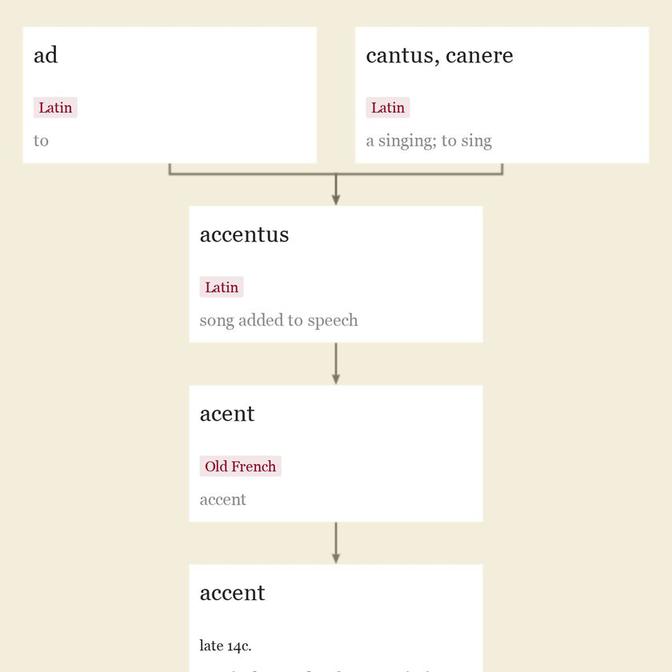 The Latin word was a loan-translation of Greek prosōidia, from pros- "to" + ōidē "song," which apparently described the pitch scheme in Greek verse. Meaning "effort in utterance making one syllable stronger than another in pitch or stress" is from 1580s; as "mark or character used in writing to indicate accent," 1590s. The decorative-arts sense of "something that emphasizes or highlights" is from 1972. 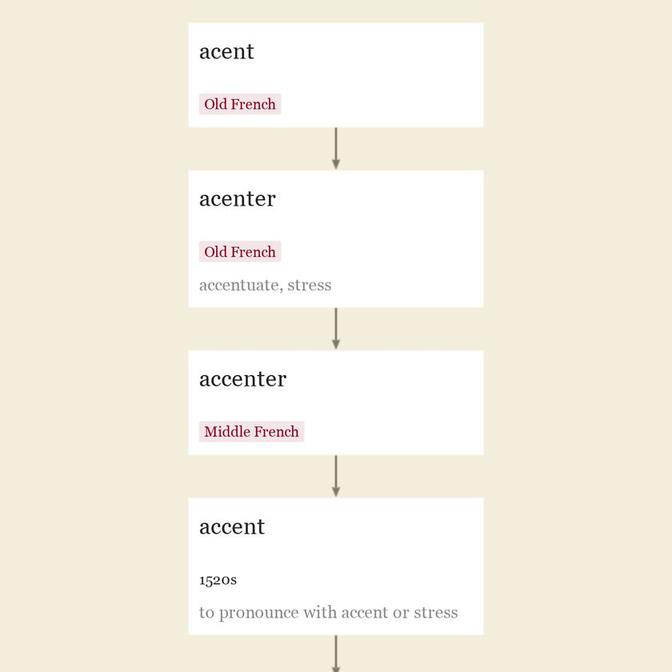 "to pronounce with accent or stress," 1520s, from French accenter, from Old French acenter "accentuate, stress," from acent (see accent (n.)). Meaning "mark with an accent sign" is from 1660s (implied in accented); figurative sense "mark emphatically" is from 1650s. Related: Accenting.

1731, "pronounce with an accent," from Medieval Latin accentuatus, past participle of accentuare "to accent," from Latin accentus "song added to speech," from ad "to" (see ad-) + cantus "a singing," past participle of canere "to sing" (from PIE root *kan- "to sing"). Figurative meaning "emphasize, place an accent or emphasis on" is recorded from 1865.

You've got to accentuate the positive

Latch on to the affirmative

in Greek grammar, "dependent in accent upon the following word," 1846, from Medieval Latin procliticus, formed on analogy of encliticus from Greek proklinein "to lean forward," from pro "forward" (see pro-) + klinein "to lean" (from PIE root *klei- "to lean"). As a noun, "monosyllabic word so closely attached to the word following as to have no accent" (1864).

late 15c., prosodie, "the science or craft of versification, the knowledge of the quantities of syllables in poetry and their pronunciation," from Latin prosodia "accent of a syllable," from Greek prosōidia "song sung to music," also "accent mark; modulation of voice," etymologically "a singing in addition to," from pros "to, forward, near" (see pros-) + ōidē "song, poem" (see ode). Related: Prosodiacal; prosodial; prosodist.

"to go in procession," 1814, "A colloquial or humorous back-formation" from procession [OED]. Accent on second syllable. The earlier verb was procession (1540s).

1650s (adj.), in grammar, "subjoined and accentually dependent," said of a word or particle which in regard to accent forms a part of a preceding word and is treated as if one with it; 1660s (n.), "a word accentually connected with a preceding word;" from Late Latin encliticus, from Greek enklitikos "throwing its accent back," literally "leaning on," from verbal adjectival stem of enklinein "to bend, lean on," from en "in" (see en- (2)) + klinein "to lean," from PIE root *klei- "to lean."