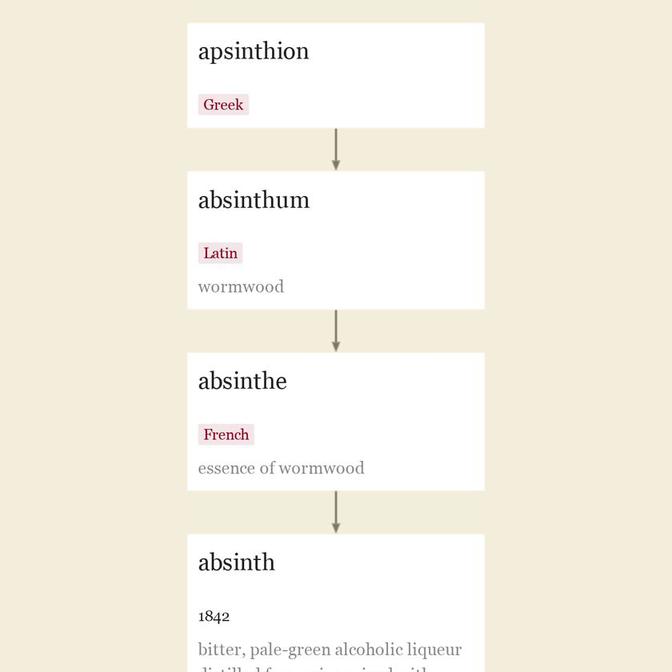 also absinth (though properly that means "wormwood"), "bitter, pale-green alcoholic liqueur distilled from wine mixed with wormwood" (Artemisia Absinthium), 1842, from French absinthe, "essence of wormwood" (short for extrait d'absinthe) from Latin absinthum "wormwood," from Greek apsinthion, which is perhaps from Persian (compare Persian aspand, of the same meaning). The wormwood plant itself is figurative of "bitter" sorrow; it was known as absinth in English from c. 1500; Old English used the word in the Latin form. The drink itself attained popularity from its heavy use by French soldiers in Algiers. Related: Absinthal; absinthic; absinthism.

c. 1400, folk etymology of Old English wermod "wormwood, absinthe," related to vermouth, but the ultimate etymology is unknown. Compare Old Saxon wermoda, Dutch wermoet, Old High German werimuota, German Wermut. Weekley suggests wer "man" + mod "courage," from its early use as an aphrodisiac. Figurative use, however, is usually in reference to its proverbial bitter aftertaste. Perhaps because of the folk etymology, it formerly was used to protect clothes and bedding from moths and fleas. "A medecyne for an hawke that hath mites. Take the Iuce of wormewode and put it ther thay be and thei shall dye." ["Book of St. Albans," 1486]