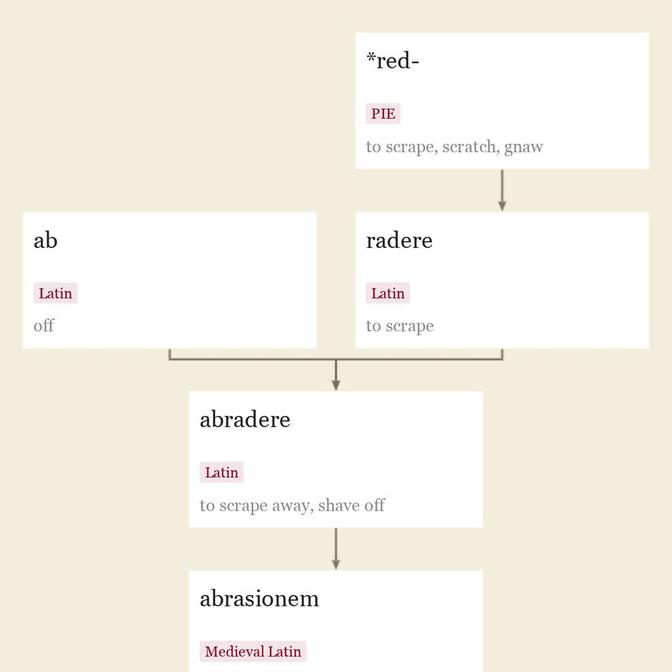 1650s, "act of abrading," from Medieval Latin abrasionem (nominative abrasio) "a scraping," noun of action from past-participle stem of Latin abradere "to scrape away, shave off," from ab "off" (see ab-) + radere "to scrape" (see raze (v.)). From 1740 as "result of abrasion."

"removing of superficial layers of skin (and their blemishes) by means of a tool," 1954; see derma + abrasion.

"tending to wear or rub off by friction," 1805, from Latin abras-, past-participle stem of abradere "to scrape away, shave off" (see abrasion) + -ive. Figurative sense of "tending to provoke anger" is first recorded 1925. Related: Abrasively; abrasiveness.

It is the hypothetical source of/evidence for its existence is provided by: Sanskrit radati "scrapes, gnaws," radanah "tooth;" Latin rodere "to gnaw, eat away," radere "to scrape;" Welsh rhathu "scrape, polish."

early 15c., attricioun, "a breaking;" 1540s, "abrasion, scraping, the rubbing of one thing against another," from Latin attritionem (nominative attritio), literally "a rubbing against," noun of action from past-participle stem of atterere "to wear, rub away," figuratively "to destroy, waste," from assimilated form of ad "to" (see ad-) + terere "to rub" (from PIE root *tere- (1) "to rub, turn").

The earliest sense in English is from Scholastic theology (late 14c.): "sorrow for sin merely out of fear of punishment or a sense of shame," an imperfect condition, less than contrition or repentance. The sense of "wearing down of military strength" is from World War I (1914). Figurative use of that is by 1930.

early 13c., scrapen, "make erasures (with a knife), erase" (a sense now obsolete); by late 14c. as "to remove (an outer layer) with a sharp or rough instrument," probably in part from Old Norse skrapa "to scrape, erase" and in part from cognate Old English scrapian "to scrape," both from Proto-Germanic *skrapojan (source also of Dutch schrapen, German schrappen), from PIE *skerb- (an extension of the root *sker- (1) "to cut").

The meaning "gather by great effort, collect with difficulty or by small savings" is from 1540s. From 1640s as "draw back the foot as a gesture of obeisance." By 1741 in the transitive sense of "rub harshly on (a surface) in passing along it so as to cause an abrasion or noise." Related: Scraped; scraping.

To scrape acquaintance "get on terms of acquaintance with by careful effort" is from c. 1600. To scrape the bottom of the barrel in the figurative sense of "make do with the most inferior or defective examples of what is wanted for want of any others" is by 1942, in reference to U.S. employers facing worker shortages during the war (the figurative bottom of the (cracker) barrel is by 1938).