bright star in the left shoulder of Orion, from Latin bellatrix "female warrior," frequently used as an adjective, "warlike, skilled in war," fem. of bellator "to wage war," from bellum "war" (see bellicose). The Latin name, from the Alfonsine Tables (mid-13c.), very loosely translates the Arabic name for the star, Al Najid "the conqueror."

In astrology it was the natal star of all destined to great civil or military honors, and rendered women born under its influence lucky and loquacious; or as old Thomas Hood said, "Women born under this constellation shall have mighty tongues." [Richard Hinckley Allen, "Star Names and Their Meanings," 1899]

1640s, "practicing rigorous self-denial as a religious exercise," from Latinized form of Greek asketikos "rigorously self-disciplined, laborious," from asketēs "monk, hermit," earlier "skilled worker, one who practices an art or trade," especially "athlete, one in training for the arena," from askein "to exercise, train," especially "to train for athletic competition, practice gymnastics, exercise," perhaps originally "to fashion material, embellish or refine material."

The Greek word was applied by the stoics to the controlling of the appetites and passions as the path to virtue and was picked up from them by the early Christians. The figurative sense of "unduly strict or austere" also is from 1640s. Related: Ascetical (1610s).

1560s, "one who is employed in manual labor, one who works mechanically, a handicraft worker, an artisan," from Latin mechanicus "of or belonging to machines or mechanics," from Greek mekhanikos "an engineer," noun use of adjective meaning "full of resources, inventive, ingenious," from mēkhanē "device, tool, machine; contrivance, cunning" (see machine (n.)).

Their social and professional organizations were prominent late 18c. and early 19c. in Britain and America, and account for the Mechanics Halls in many towns and the Mechanicsvilles and Mechanicsburgs on the map. The sense of "skilled workman who is concerned with the making or repair of machinery" is attested from 1660s, but was not the main sense of the word until the rise of the automobile in late 19c.

1580s, "person skilled in politics;" see politics + -ian. Especially "one engaged in party politics, especially as a trade; one who promotes the interests of a political party," and thus it quickly took on overtones, not typically good ones: "one concerned with public affairs for the sake of profit or of a clique." Johnson defines it as "A man of artifice; one of deep contrivance."

The notion of enlightened, disinterested, and high-minded service to the state goes with statesman (Century Dictionary notes that "A man, however, would not properly be called a statesman unless he were also of eminent ability in public affairs"). For "student of political science," by way of distinction, politicist (1869) has been used.

1610s, "meddlesome, impertinently busy," short for earlier pragmatical, or else from French pragmatique (15c.), from Latin pragmaticus "skilled in business or law," from Greek pragmatikos "fit for business, active, business-like; systematic," from pragma (genitive pragmatos) "a deed, act; that which has been done; a thing, matter, affair," especially an important one; also a euphemism for something bad or disgraceful; in plural, "circumstances, affairs" (public or private, often in a bad sense, "trouble"), literally "a thing done," from stem of prassein/prattein "to do, act, perform" (see practical).

From 1640s as "relating to the affairs of a state or community." Meaning "matter-of-fact, treating facts systematically and practically" is from 1853 (Matthew Arnold). In some later senses from German pragmatisch.

Meaning "someone particularly skilled or excellent" (with overtones of showing off) is from 1896. Connection between the two senses, if any, is unclear. Hot dog! as an exclamation of approval was in use by 1906. 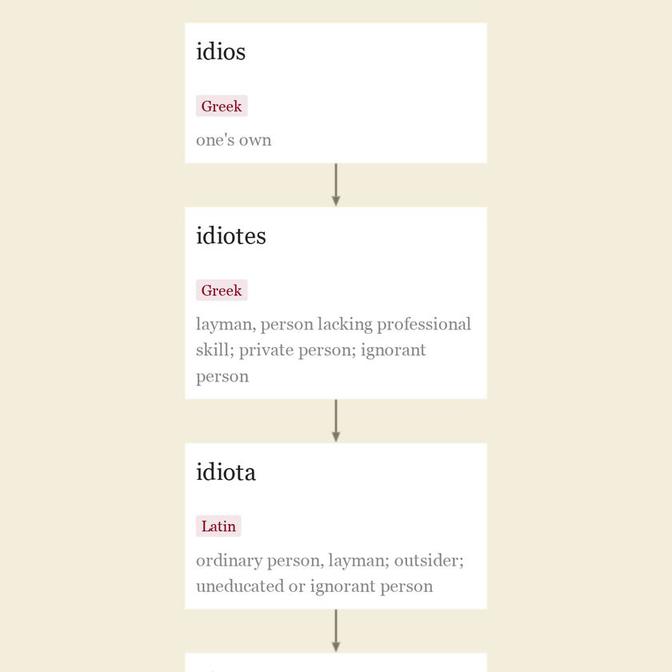 In plural, the Greek word could mean "one's own countrymen." In old English law, one who has been without reasoning or understanding from birth, as distinguished from a lunatic, who became that way. Idiot box "television set" is from 1959; idiot light "dashboard warning signal" is attested from 1961. Idiot savant attested by 1870.

1711, "pertaining to official or original documents, texts, or charters," from Modernl Latin diplomaticus (1680s), from diplomat-, stem of Latin diploma "a state letter of recommendation," given to persons travelling to the provinces, "a document drawn up by a magistrate," from Greek diploma "a licence, a chart," originally "paper folded double," from diploun "to double, fold over," from diploos "double" (see diplo-) + -oma, suffix forming neuter nouns and nouns that indicate result of verbal action (see -oma).

In the general sense of "tactful and adroit, skilled in negotiation or intercourse of any kind" it dates from 1826. Diplomatic immunity is attested by 1849. Related: Diplomatically.

1770, "science dealing with data about the condition of a state or community" [Barnhart], from German Statistik, popularized and perhaps coined by German political scientist Gottfried Aschenwall (1719-1772) in his "Vorbereitung zur Staatswissenschaft" (1748), from Modern Latin statisticum (collegium) "(lecture course on) state affairs," from Italian statista "one skilled in statecraft," from Latin status "a station, position, place; order, arrangement, condition," figuratively "public order, community organization," noun of action from past participle stem of stare "to stand" from PIE root *sta- "to stand, make or be firm."

OED points out that "the context shows that [Aschenwall] did not regard the term as novel," but current use of it seems to trace to him. Sir John Sinclair is credited with introducing it in English use. Meaning "numerical data collected and classified" is from 1829; hence the study of any subject by means of extensive enumeration. Abbreviated form stats first recorded 1961.

c. 1200, kene, from Old English cene "bold, brave, fearless," in later Old English "clever, prudent, wise, intelligent," common Germanic (cognate with Old Norse kænn "skillful, wise," Middle Dutch coene "bold," Dutch koen, Old High German kuon "pugnacious, strong," German kühn "bold, daring"), but according to OED there are no cognates outside Germanic and the original meaning is "somewhat obscure"; it seem to have been both "brave" and "skilled." Perhaps the connection notion was "to be able" and the word is connected to the source of can (v.1).