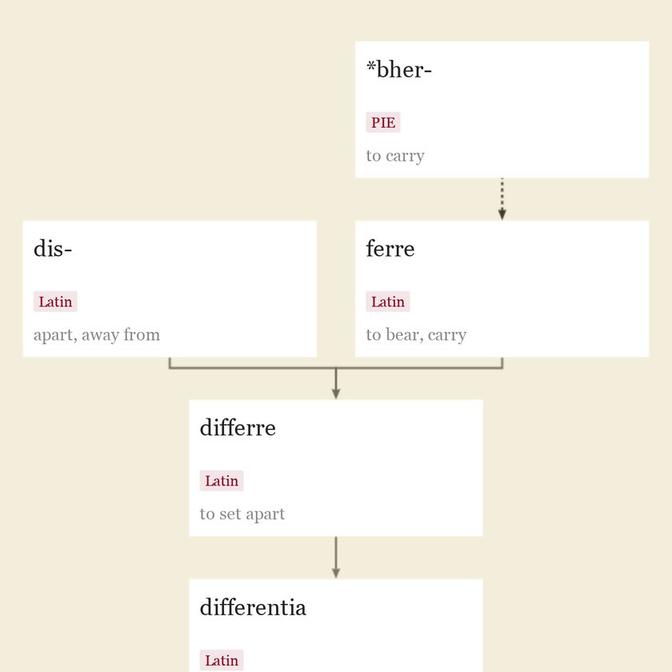 mid-14c., "condition or relation of being other or different," also "any special mode of non-identity," from Old French difference"difference, distinction; argument, dispute" (12c.) and directly from Latin differentia "diversity, difference," from differentem (nominative differens), present participle of differre "to set apart,"  from assimilated form of dis- "apart, away from" (see dis-) + ferre "to bear, carry," from PIE root *bher- (1) "to carry." Sense of "controversy, dispute, a quarrel" is from late 14c.

Related entries & more
Advertisement
branch (n.)
c. 1300, braunch, "division or subdivision of the stem of a tree or bush" (also used of things resembling a branch in its relation to a trunk, such as geographic features, lines of family descent), from Old French branche "branch, bough, twig; branch of a family" (12c.), from Late Latin branca "footprint," later "a claw, paw," which is of unknown origin, probably from Gaulish. The connecting notion would be the shape (compare pedigree). Replaced native bough. Meaning "local office of a business" is first recorded 1817, from earlier sense of "component part of a system" (1690s).
Related entries & more
apposition (n.) 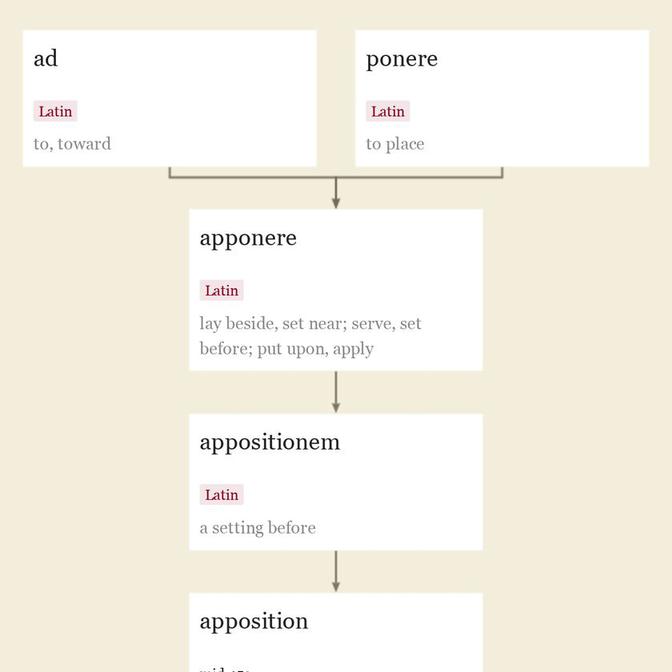 "application" (of one thing to another), mid-15c., originally in grammatical sense "the relation to a noun or pronoun of another noun or clause added to it by way of explanation," from Latin appositionem (nominative appositio) "a setting before," noun of action from past-participle stem of apponere "lay beside, set near," especially "serve, set before," also "put upon, apply," from ad "to, toward" (see ad-) + ponere "to place" (past participle positus; see position (n.)). The general sense is from 1540s.

early 14c., ruffelen, "to disturb the smoothness or order of," a word of obscure origin. Similar forms are found in Scandinavian (such as Old Norse hrufla "to scratch") and Low German (ruffelen "to wrinkle, curl;" Middle Low German ruffen "to fornicate"), but the exact relation and origin of them is uncertain. Also compare Middle English ruffelen "be at odds with, quarrel, dispute."

The meaning "disarrange" (hair or feathers) is recorded from late 15c.; the sense of "annoy, vex, distract" is from 1650s. Related: Ruffled; ruffling.

1560s, "preponderance, dominance, leadership," originally of predominance of one city state or another in Greek history; from Greek hēgemonia "leadership, a leading the way, a going first;" also "the authority or sovereignty of one city-state over a number of others," as Athens in Attica, Thebes in Boeotia; from hēgemon "leader, an authority, commander, sovereign," from hēgeisthai "to lead," perhaps originally "to track down," from PIE *sag-eyo-, from root *sag- "to seek out, track down, trace" (see seek). In reference to modern situations from 1850, at first of Prussia in relation to other German states.

1660s, "reference, relation, relationship," from French rapport "bearing, yield, produce; harmony, agreement, intercourse," back-formation from rapporter "bring back; refer to," from re- "again" (see re-) + apporter "to bring," from Latin apportare "to bring," from ad "to" (see ad-) + portare "to carry" (from PIE root *per- (2) "to lead, pass over"). The Old French noun was report "pronouncement, judgment," from reporter "to tell, relate" (see report (v.)).

Especially "harmonious relation; accord or agreement; analogy." Psychological meaning "intense harmonious accord," as between therapist and patient, is first attested 1894, though the word had been used in a similar sense with reference to mesmerism from 1845 (in Poe). Also see report (n.).

Formerly often used as a French word, and in en rapport. Johnson [1755] frowns on the word and credits its use in English to Sir William Temple, notorious naturalizer of French terms, who did use it but was not the first to do so. Fowler writes that it was "formerly common enough to be regarded and pronounced as English," but in his time [1926] the word seemed to have reacquired its Frenchness and was thus dispensable.