1868, "appointed or nominated but not yet installed," past-participle adjective from designate (v.). The baseball designated hitter "substitute named before the start of a game to hit for the pitcher" was introduced in the American League in 1973; it soon gave wide figurative extension to designated, as in designated driver (by 1985).

late 14c., "gaping void; empty, immeasurable space," from Old French chaos (14c.) or directly from Latin chaos, from Greek khaos "abyss, that which gapes wide open, that which is vast and empty," from *khnwos, from PIE root *ghieh- "to yawn, gape, be wide open."

Meaning "utter confusion" (c. 1600) is an extended sense from theological use of chaos in the Vulgate version of "Genesis" (1530s in English) for "the void at the beginning of creation, the confused, formless, elementary state of the universe." The Greek for "disorder" was tarakhe, but the use of chaos here was rooted in Hesiod ("Theogony"), who describes khaos as the primeval emptiness of the Universe, and in Ovid ("Metamorphoses"), who opposes Khaos to Kosmos, "the ordered Universe." Sometimes it was personified as a god, begetter of Erebus and Nyx ("Night").

Meaning "orderless confusion" in human affairs is from c. 1600. Chaos theory in the modern mathematical sense is attested from c. 1977.

Related entries & more
textbook (n.)
also text-book, "book used by students," 1779, from text (n.) + book (n.). Earlier (1730) it meant "book printed with wide spaces between the lines" for notes or translation (such a book would have been used by students), from the notion of the text of a book being more open than the close notes. As an adjective from 1916.
Related entries & more
speakeasy (n.)
"unlicensed saloon," 1889 (in the New York "Voice"), from verbal phrase, from speak (v.) + easy (adv.); so called from the practice of speaking quietly about such a place in public, or when inside it, so as not to alert the police and neighbors. The word gained wide currency in U.S. during Prohibition (1920-1932). In early 19c. Irish and British dialect, a speak softly shop meant "smuggler's den."
Related entries & more
croup (n.)

"coughing illness," a name given to various diseases involving interference at the glottis with respiration," 1765, from obsolete verb croup "to cry hoarsely, croak" (1510s), probably echoic. This was the local name of the disease in southeastern Scotland, given wide currency by Dr. Francis Home (1719-1813) of Edinburgh in his 1765 treatise on it. Related: Croupy. 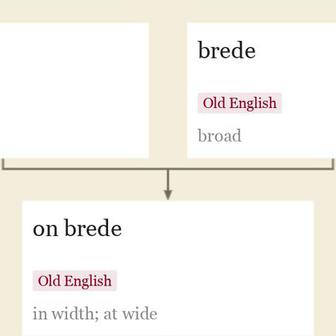 mid-13c., "widely apart," a contraction of on brode, from Old English on brede, "in width," literally "at wide" (see a- (1) + broad (adj.)). From c. 1300 as "at a distance from each other," hence "out of doors, away from home" (late 14c.) also "at a distance generally" (early 15c.), and the main modern sense, "out of one's country, overseas" (mid-15c.).
Related entries & more
straddle (v.)
1560s, "spread the legs wide," probably an alteration of striddle (mid-15c.), frequentative of striden (see stride (v.)). Transitive sense "place one leg on one side of and the other on the other side of" is from 1670s. U.S. colloquial figurative sense of "take up an equivocal position, appear to favor both sides" is attested from 1838. Related: Straddled; straddling. The noun is first recorded 1610s.
Related entries & more
laminate (v.)
1660s, "to beat or roll into thin plates," from Latin lamina "thin piece of metal or wood, thin slice, plate, leaf, layer," a word of unknown origin; de Vaan writes that "The only serious etymology offered is a connection with latus 'wide' ...." Many modern senses in English are from the noun meaning "an artificial thin layer" (1939), especially a type of plastic adhesive. Related: Laminated; laminating; laminable.
Related entries & more
Athabaskan

also Athabascan, Athapaskan, 1844 as a language name, from the name of the widespread family of North American Indian languages, from Lake Athabaska in northern Alberta, Canada, from Woods Cree (Algonquian) Athapaskaw, literally "(where) there are plants one after another" [Bright], referring to the delta region west of the lake. The languages are spoken across a wide area of Alaska and sub-arctic Canada and include Apachean (including Navajo) in the U.S. southwest.