by 1886 in American English in reference to a type of hound bred in the South, with a red or red and tan coat, used especially to hunt raccoons and fugitives. The name probably has some connection to the term Redbone as used in 19c. southern U.S. to denote a mulatto or mixed-race culture.

The Redbone is one of the old-time strains; confined exclusively to the Southern States. The "native" Birdsong, Georgia, Virginia, and Kentucky Hounds were undoubtedly the Redbone strain before the introduction of the various crosses previously mentioned. They were a slow, painstaking Hound, with superior nose and splendid mouth, without speed. [Gen. Roger D. Williams, "The American Foxhound," in "Dogs," New York: 1907]

"true or faithful in allegiance," 1530s, in reference to subjects of sovereigns or governments, from French loyal, from Old French loial, leal "of good quality; faithful; honorable; law-abiding; legitimate, born in wedlock," from Latin legalem, from lex "law" (see legal).

Identical with legal, which maintains the Latin form; in most uses it has displaced Middle English leal, which is an older borrowing of the French word. For the twinning, compare royal/regal. Sense development in English is feudal, via notion of "faithful in carrying out legal obligations; conformable to the laws of honor." In a general sense (of dogs, lovers, etc.), from c. 1600. As a noun meaning "those who are loyal" from 1530s (originally often in plural).

Meaning "that which holds two or more things firmly together" (on notion of clasping arms) is from mid-15c. Hence applied to various devices for fastening and tightening. Meaning "a prop, support," especially in architecture, is from 1520s. Of dogs, ducks, pistols, etc., "a couple, a pair" from c. 1400. Braces is from 1798 as "straps passing over the shoulders to hold up the trousers;" from 1945 as "wires for straightening the teeth."
Related entries & more
collie (n.)

breed of dog, a kind of sheep-dog much esteemed in Scotland, 1650s, of uncertain origin. Possibly from dialectal coaly "coal-black," the color of some breeds (compare colley, "sheep with black face and legs," attested from 1793; Middle English colfox, "coal-fox," a variety of fox with tail and both ears tipped with black; and colley, Somerset dialectal name for "blackbird"). Or from Scandinavian proper name Colle, which is known to have been applied to dogs in Middle English ("Ran Colle our dogge, and Talbot, and Gerlond" [Chaucer, "Nun's Priest's Tale"]). Century Dictionary cites Gaelic cuilean, cuilein "a whelp, puppy, cub." Or perhaps it is a convergence of them. Border-collie (by 1894) was so called from being bred in the border region between Scotland and England.

Transitive meaning "move (something) back and forth or up and down" is from c. 1300; of dogs and their tails from mid-15c.: "and whanne they [hounds] see the hure maystre they wol make him cheere and wagge hur tayles upon him." [Edward, Duke of York, "The Master of Game," 1456]. Related: Wagged; wagging. Wag-at-the-wall (1825) was an old name for a hanging clock with pendulum and weights exposed.
Related entries & more
Advertisement
bait (v.1)
c. 1200, "to torment or persecute (someone);" c. 1300, "to set a dog to bite and worry (an animal, especially a confined one, for sport)," from Old Norse beita "to cause to bite," from Proto-Germanic *baitjan (source also of Old English bætan "to cause to bite," Old High German beizzen "to bait," Middle High German beiz "hunting," German beizen "to hawk, to cauterize, etch"), causative of *bitan (see bite (v.)).

The earliest attested use is figurative of the literal one, which is from the popular medieval entertainment of setting dogs on some ferocious beast to bite and worry it. The verb also in Middle English could mean "put a horse or other domestic beast out to feed or graze," and, of persons, "to eat food," also figuratively "feast the eye" (late 14c.). Compare bait (n.). Related: Baited; baiting.
Related entries & more
*bheid-
Proto-Indo-European root meaning "to split," with derivatives in Germanic "referring to biting (hence also to eating and to hunting) and woodworking" [Watkins].

late 15c., "woman's small pet dog," a word of uncertain origin but likely to be from French poupée "doll, toy" (see puppet). "A little dog appears to have been called puppy because petted as a doll or puppet" [Century Dictionary].

The meaning shifted from "toy dog" to "young dog" (1590s), replacing native whelp. In early use in English the words puppet and puppy were not always distinguished. The word also was used from about that time in the contemptuous sense of "vain or silly young man."

Puppy-dog is attested by 1590s (in Shakespeare, puppi-dogges). Puppy love "juvenile infatuation" is from 1823. Puppy fat "excessive fat on a child or adolescent" is by 1913 (in reference to young dogs by 1894). 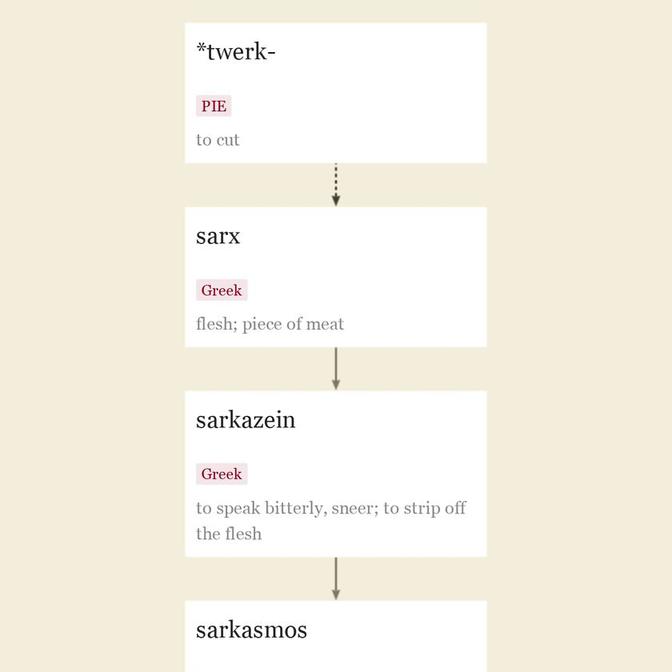 The essential thing about sarcasm is its cutting edge ; it therefore is intensely concentrated, lying in a sentence or a phrase ; it is used to scourge the follies or foibles or vices of men, but has little of reformatory purpose. Satire is more elaborate than sarcasm, is not necessarily bitter, and has, presumably, some aim at the reformation of that which is satirized. [Century Dictionary]

"to ask alms," especially to do so habitually as one's way of life, c. 1200, of uncertain origin. Perhaps from the rare Old English bedecian "to beg," from Proto-Germanic *beth-. Or from Anglo-French begger, a back-formation from Old French noun begart (see beggar (n.)) and ultimately from Beguine, which OED considers "perhaps the most likely derivation." The Old English word for "beg" was wædlian, from wædl "poverty." Related: Begged; begging.

Meaning "ask for" (a favor, etc.) is by 1520s. As a courteous mode of asking (beg pardon, etc.), attested by c. 1600. Of dogs, 1762. To beg the question (1580s) translates Latin petitio principii, and means "to assume something that hasn't been proven as a basis of one's argument," thus "asking" one's opponent to give something unearned, though more of the nature of taking it for granted without warrant. To beg off (something) "obtain release from by entreaty" is from 1741.