Advertisement
all
word
name
phrase
suffix
prefix
word root
61 entries found.
Einstein (n.)
as a type-name for a person of genius, 1920, in reference to German-born theoretical physicist Albert Einstein (1879-1955), who was world-famous from 1919 through media accounts of his work in theoretical physics. According to "German-American Names" (George F. Jones, 3rd ed., 2006) it means literally "place encompassed by a stone wall."
Related entries & more
Advertisement
luminescence (n.)

Fluorescence and Phosphorescence — Prof. E. Wiedmann has made a new study of these phenomena. He proposes the general name luminescence for evolutions of light which do not depend on the temperature of the substance concerned. ["Photographic News," April 20, 1888]

"negative pole of an electric current," 1834, from Latinized form of Greek kathodos "a way down," from kata "down" (see cata-) + hodos "a way, path, track, road," a word of uncertain origin (see Exodus). Proposed by the Rev. William Whewell, English polymath, and published by English chemist and physicist Michael Faraday. So called from the path the electric current was supposed to take. Related: Cathodic; cathodal. Cathode ray first attested 1880, but the phenomenon known from 1859; cathode ray tube is from 1905. 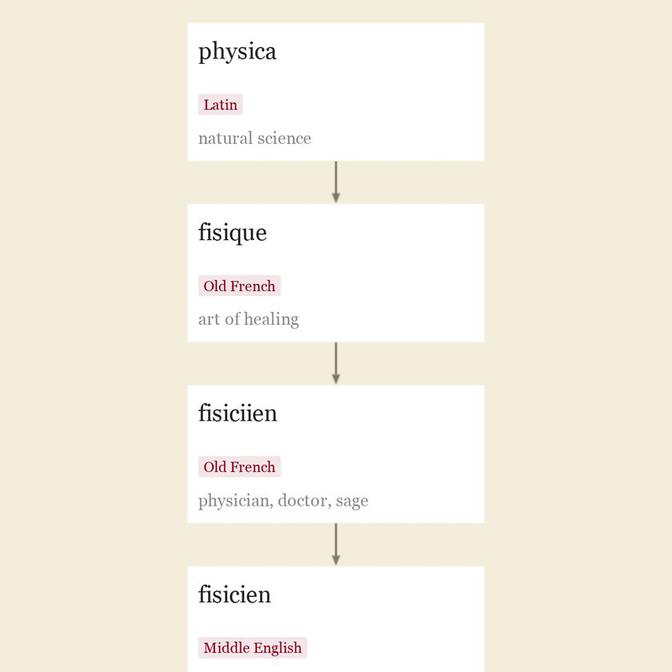 1920 in physics sense of "sub-atomic particle with a positive charge," coined by British physicist Ernest Rutherford (1871-1937) from noun use of Greek prōton, neuter of prōtos "first" (see proto-), on analogy of electron; supposedly because hydrogen (the nucleus of which, in its commonest form, consists of one proton) was hypothesized as a constituent of all the elements. The word was used earlier in embryology (1893) as a translation of German anlage ("fundamental thing") based on Aristotle's phrase he prote ousia to proton.

by 1972 in reference to the thought experiment proposed in 1935 by Austrian-born physicist Erwin Schrödinger (1887-1961) in correspondence with Albert Einstein about quantum mechanics. Schrödinger was pointing out a problem in the then-prevailing interpretation of the science. Einstein had written, as an example, about an unstable keg of gunpowder that will in some quantum sense exist in both exploded and unexploded states. To point out the flaw Schrödinger wrote "One can even set up quite ridiculous cases," and described the cat situation, in which the animal is both dead and alive until its state has been observed.

hypothetical subatomic particle having a fractional electric charge, 1964, applied by U.S. physicist Murray Gell-Mann (1929-2019), who said in correspondence with the editors of the OED in 1978 that he took it from a word in James Joyce's "Finnegans Wake" (1939), but also that the sound of the word was in his head before he encountered the printed form in Joyce.

German Quark "curds, rubbish" has been proposed as the ultimate inspiration [Barnhart; Gell-Mann's parents were immigrants from Austria-Hungary]; it is from Old Church Slavonic tvarogu "curds, cottage cheese" (from a suffixed form of PIE root *teue- "to swell," source also of Greek tyros "cheese"). George Zweig, Gell-Mann's co-proposer of the theory, is said to have preferred the name ace for them.

1868, from German Entropie "measure of the disorder of a system," coined 1865 (on analogy of Energie) by German physicist Rudolph Clausius (1822-1888), in his work on the laws of thermodynamics, from Greek entropia "a turning toward," from en "in" (see en- (2)) + trope "a turning, a transformation" (from PIE root *trep- "to turn"). The notion is supposed to be "transformation contents." Related: Entropic.

It was not until 1865 that Clausius invented the word entropy as a suitable name for what he had been calling "the transformational content of the body." The new word made it possible to state the second law in the brief but portentous form: "The entropy of the universe tends toward a maximum," but Clausius did not view entropy as the basic concept for understanding that law. He preferred to express the physical meaning of the second law in terms of the concept of disgregation, another word that he coined, a concept that never became part of the accepted structure of thermodynamics. [Martin J. Klein, "The Scientific Style of Josiah Willard Gibbs," in "A Century of Mathematics in America," 1989]