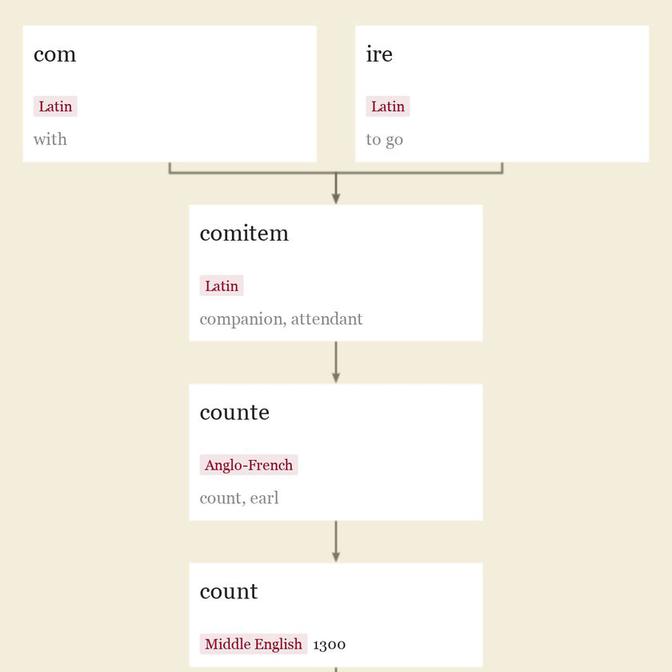 title of nobility in some continental nations, corresponding to English earl, c. 1300, from Anglo-French counte "count, earl" (Old French conte), from Latin comitem (nominative comes) "companion, attendant," the Roman term for a provincial governor, from com "with" (see com-) + stem of ire "to go" (from PIE root *ei- "to go"). The term was used in Anglo-French to render Old English eorl, but the word was never truly naturalized and mainly was used with reference to foreign titles.

In ancient Rome and the Roman empire, [a comes was] a companion of or attendant upon a great person; hence, the title of an adjutant to a proconsul or the like, afterward specifically of the immediate personal counselors of the emperor, and finally of many high officers, the most important of whom were the prototypes of the medieval counts. [Century Dictionary]

Noun meaning "that which is sudden, a sudden need or emergency" is from 1550s, obsolete except in phrase all of a sudden first attested 1680s, also of a sudayn (1590s), upon the soden (1550s). Sudden death, tie-breakers in sports, first recorded 1927; earlier in reference to coin tosses (1834). Related: Suddenness.
Related entries & more
exit (n.)

"copulation, sexual intercourse," 1848, scientific use of Latin coitus "a meeting together; sexual union," past participle of coire "to come together, meet," from assimilated form of com "together" (see co-) + ire (past participle itus) "to come, to go," (from PIE root *ei- "to go").

In Middle English nativized as coite (early 15c.). Coitus was used in English in general senses of "meeting, uniting," and also in reference to magnetic force, planetary conjunction, etc., before the sexual sense came to predominate.

Coitus interruptus, "sexual intercourse in which the penis is voluntarily withdrawn from the vagina before ejaculation, for the purpose of avoiding conception," is from 1886 (from 1885 in German publications). Coitus reservatus in reference to prolonged copulation by deliberate control is from 1890 in English (1880 in German).

From mid-15c. in reference to the Celtic language spoken in Ireland. Some Middle English forms of the word suggest influence of (or punning on) Old French irais, irois "wrathful, bad-tempered" (literally "ire-ous") and Irais "Irish."

Meaning "temper, passion" is 1834, American English (first attested in writings of Davy Crockett), from the legendary pugnacity of the Irish. Irish-American (n.) is from 1816 (as an adjective from 1820). Wild Irish (late 14c.) originally were those not under English rule; Black Irish in reference to those of Mediterranean appearance is from 1888.

late 14c., "a circumference; a periphery, a line going around (an area), whether circular or not; a circular or circuitous course," from Old French circuit (14c.) "a circuit; a journey (around something)," from Latin circuitus "a going around," from stem of circuire, circumire "go around," from circum "round" (see circum-) + ire "to go" (from PIE root *ei- "to go").

From c. 1400 as "space enclosed within certain limits." Hence, "district in which any business involving periodic journeys is done (1570s), especially of judicial assignments involving the journey of a judge from one place to another; in reference to routes followed by itinerant entertainers from 1834. Hence also circuit-rider "Methodist minister who rides a circuit, preaching successively in different stations" (by 1834); to ride circuit "take a roundabout course" is from 1650s.

Electrical sense "arrangement by which a current is kept up between two poles" is from 1746. Circuit-breaker "device for automatically opening an electrical circuit" is recorded from 1874. Related: Circuital.

In early use, 'factious with tumult, turbulent' (J.); now chiefly, engaged in promoting disaffection or inciting to revolt against constituted authority [OED]

The meaning "conduct or language inciting to rebellion against a lawful government" is attested by 1838. Less serious than treason, as wanting an overt act.

But it is not essential to the offense of sedition that it threaten the very existence of the state or its authority in its entire extent. Thus, there are seditious assemblies, seditious libels, etc., as well as direct and indirect threats and acts amounting to sedition — all of which are punishable as misdemeanors by fine and imprisonment. [Century Dictionary]

Latin seditio was glossed in Old English by unsib, folcslite.

Legal sense developed from the notion of "end or result of pleadings in a suit (by presentation of the point to be determined by trial)," hence "the controversy over facts in a trial" (early 14c., Anglo-French) and transferred sense "point of contention between two parties" (early 15c.) and the general sense "an important point to be decided" (1836). Hence also the verbal phrase take issue with (1797, earlier join issue, 1690s) "take up an affirmative or negative position in a dispute with another." To have issues "have unresolved conflicts" is by 1990.
Related entries & more
copperhead (n.)

Poisonous "sneak snakes" (because unlike the rattlesnake they strike without previous movement or warning), hence the figurative use in reference to hidden danger or secret hostility.

The copper-head, though smaller, was much more feared. The rattle-snake was larger, sooner seen, and a true southerner, always living up to the laws of honor. He would not bite without provocation, and by his rattles gave the challenge in an honorable way. Instead of this well-bred warfare, the copper-head is a wrathy little felon, whose ire is always up, and he will make at the hand or the foot in the leaves or grass, before he is seen, and his bite is as poisonous as that of his brother of the larger fang. The young men tested his temper, and found that in his wrath he would bite a red hot coal. [Henry Howe, "Historical Collections of Ohio," 1854]

Specifically in reference to Northerners suspected of sympathizing with the Southern rebellion, the name is said to have been first used in Greeley's New York "Tribune," July 20, 1861. Charles H. Coleman, "The Use of the Term 'Copperhead' During the Civil War" ["Mississippi Valley Historical Review" 25 (1938), p.263] traces it to an anonymous letter against Ohio anti-war Democrats in the Cincinnati "Commercial" newspaper in the summer of 1861. It seems not to have been in widespread use until summer 1862. Related: Copperheadism.