1530, "goat sent into the wilderness on the Day of Atonement as a symbolic bearer of the sins of the people," coined by Tyndale from scape, a shortening of escape (see scape (v.)) + goat; the whole word translating Latin caper emissarius, itself a translation in Vulgate of Hebrew 'azazel (Leviticus xvi.8, 10, 26), which was read as 'ez ozel "goat that departs," but which others hold to be the proper name of a devil or demon in Jewish mythology (sometimes identified with Canaanite deity Aziz).

Jerome's reading was followed by Martin Luther (der ledige Bock), Symmachus (tragos aperkhomenos), and others (compare French bouc émissaire), but the question of who, or what (or even where) is meant by 'azazel is a vexed one. The Revised Version (1884) simply restores Azazel. But the old translation has its modern defenders:

Azazel is an active participle or participial noun, derived ultimately from azal (connected with the Arabic word azala, and meaning removed), but immediately from the reduplicate form of that verb, azazal. The reduplication of the consonants of the root in Hebrew and Arabic gives the force of repetition, so that while azal means removed, azalzal means removed by a repetition of acts. Azalzel or azazel, therefore, means one who removes by a series of acts. ... The interpretation is founded on sound etymological grounds, it suits the context wherever the word occurs, it is consistent with the remaining ceremonial of the Day of Atonement, and it accords with the otherwise known religious beliefs and symbolical practices of the Israelites. [Rev. F. Meyrick, "Leviticus," London, 1882]

The transferred meaning "one who is blamed or punished for the mistakes or sins of others" is recorded by 1824; the verb is attested by 1884. Related: Scapegoated; scapegoating.

For the formation, compare scapegrace (which is perhaps modeled on this word), also scape-gallows "one who deserves hanging," scapethrift "spendthrift" (mid-15c.). 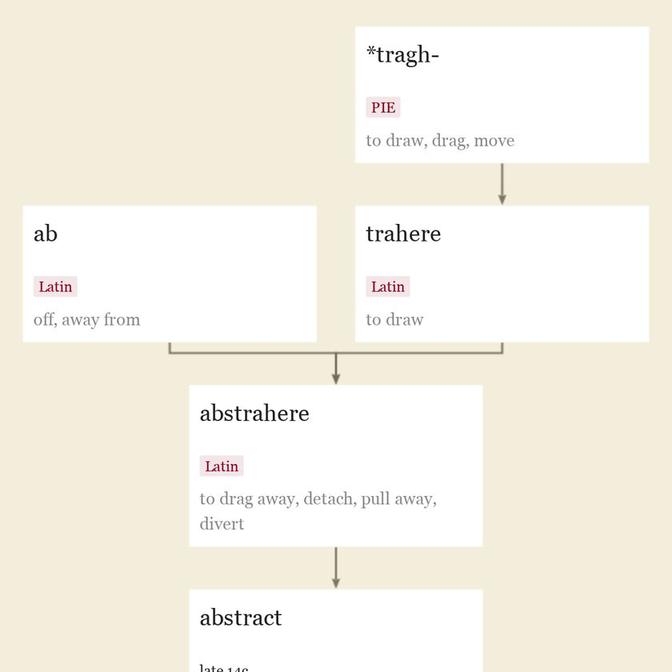 late 14c., originally in grammar (in reference to nouns that do not name concrete things), from Latin abstractus "drawn away," past participle of abstrahere "to drag away, detach, pull away, divert," also used figuratively; from assimilated form of ab "off, away from" (see ab-) + trahere "to draw" (from PIE root *tragh- "to draw, drag, move;" see tract (n.1)).

The meaning in philosophy, "withdrawn or separated from material objects or practical matters" (opposed to concrete) is from mid-15c. That of "difficult to understand, abstruse" is from c. 1400.

In the fine arts, "characterized by lack of representational qualities" by 1914; it had been a term at least since 1847 for music without accompanying lyrics. Abstract expressionism as an American-based uninhibited approach to art exemplified by Jackson Pollock is from 1952, but the term itself had been used in the 1920s of Kandinsky and others.

Oswald Herzog, in an article on "Der Abstrakte Expressionismus" (Sturm, heft 50, 1919) gives us a statement which with equal felicity may be applied to the artistic attitude of the Dadaists. "Abstract Expressionism is perfect Expressionism," he writes. "It is pure creation. It casts spiritual processes into a corporeal mould. It does not borrow objects from the real world; it creates its own objects .... The abstract reveals the will of the artist; it becomes expression. ..." [William A. Drake, "The Life and Deeds of Dada," 1922]

Then, that art we have called "abstract" for want of any possible descriptive term, with which we have been patient, and, even, appreciative, getting high stimulation by the new Guggenheim "non-objective" Art Museum, is reflected in our examples of "surrealism," "dadaism," and what-not, to assert our acquaintance in every art, fine or other. [Report of the Art Reference Department of Pratt Institute Free Library for year ending June 30, 1937]