"comprehending much in few words," 1580s, from Latin concisus "cut off, brief," past participle of concidere "to cut off, cut up, cut through, cut to pieces," from assimilated form of com-, here perhaps an intensive prefix (see con-), + caedere "to cut" (from PIE root *kae-id- "to strike"). Related: Concisely.

Concise frequently refers to style, and signifies the expression of much in few words; succinct is generally applied to the matter, the less important things being omitted: thus a concise style or phrase, but a succinct narrative or account. [Century Dictionary]

early 15c., "the formal enumerating of the votes in an election to an office or dignity" (according to OED, "Now chiefly in Canon Law"), from Late Latin scrutinium "a search, inquiry" (in Medieval Latin, "a mode of election by ballot"), from Latin scrutari "to examine, investigate, search" (from PIE root *skreu- "to cut; cutting tool;" see shred (n.)). The meaning "close investigation or examination" is recorded from c. 1600.

Perhaps the original notion of the Latin word is "to search among rubbish," via scruta (plural) "trash, rags, rubbish" ("shreds"); or the original sense might be "to cut into, scratch."

"microscopic unicellular algae," 1845, from Modern Latin genus name Diatoma, coined from Greek diatomos "cut in two," from diatemnein "to cut through," from dia "through" (see dia-) + temnein "to cut" (from PIE root *tem- "to cut"). So called because they typically appear to have been cut in half. Related: Diatomic; diatomaceous. 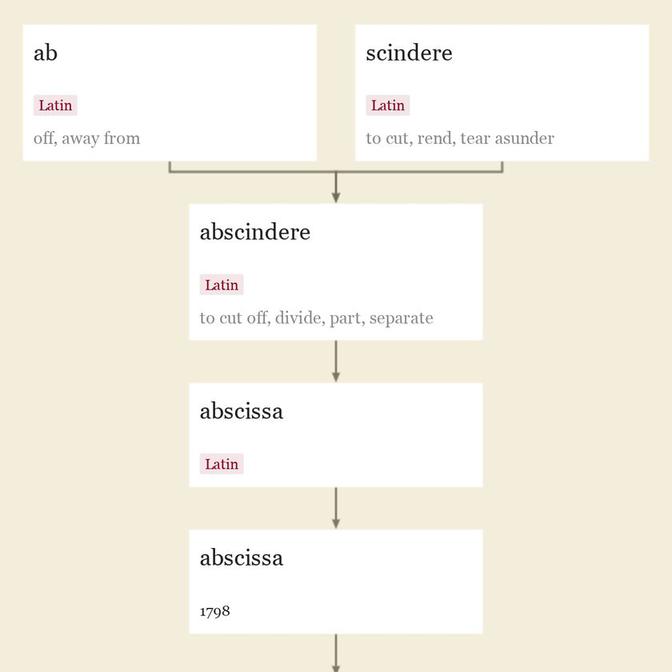 1798 in Latin form, earlier Englished as abscisse (1690s), from Latin abscissa, short for abscissa (linea) "(a line) cut off," or (recta ex diametro) abscissa "(a line) cut off (from the diameter)," fem. of abscissus "cut off," past participle of abscindere "to cut off, divide, part, separate," from ab "off, away from" (see ab-) + scindere "to cut, rend, tear asunder, split; split up, part, divide, separate," from PIE *skind-, from root *skei- "to cut, split." The Latin word translates Greek apolambanomene.
Related entries & more
Roundhead (n.)

in English, history, "an adherent of the Parliamentary party in the English Civil War," 1641; see round (adj.) + head (n.). So called opprobriously for their custom of wearing the hair close-cropped, in contrast to the flowing curls of the cavaliers. To round (v.) "cut (the hair) short around the head" is attested from mid-15c. The party evolved into the Whigs.

"to cut in quarters, divide into four equal parts," mid-14c., from quarter (n.1). From late 14c. specifically as the word for a form of criminal punishment (Old English had slitcwealm "death by rending"). Related: Quartered; quartering. Middle English also had a verb quartle "to divide into four parts" (late 14c.).

The meaning "furnish with lodgings, shelter, etc. as a temporary means of living" is recorded from 1590s (see quarters), often specifically "to put up soldiers" under orders from authority.

1630s, "to cut off a limb," originally in English both of plants and persons; a back-formation from amputation or else from Latin amputatus, past participle of amputare "to cut off, lop off; cut around, to prune," from am(bi)- "around" (from PIE root *ambhi- "around") + putare "to prune, trim" (from PIE root *pau- (2) "to cut, strike, stamp"). Related: Amputated; amputating.