"highly chromatic deep red color," early 15c., cremesin, "cloth dyed deep purplish-red," also as an adjective, "of a crimson color," from Old Italian carmesi, cremesi (c. 1300), later carmisino, cremesinus, "crimson color; cochineal dye," from Arabic qirmizī (see kermes). For similar transfer of the dye word to generic use for "red," compare Old Church Slavonic čruminu, Russian čermnyj "red," from the same source. The French form in 15c.-16c. when the word entered English was cramoisin. "The word in Italian came from Arabic, and the word in all other European languages came from Italian via exports of silk cloths from Italy." ["English Words of Arabic Ancestry"]

1935, as visual equivalent of audio, from Latin video "I see," first person singular present indicative of videre "to see" (see vision). As a noun, "that which is displayed on a (television) screen," 1937.

Engineers, however, remember the sad fate of television's first debut and are not willing to allow "video transmission" (as television is now called by moderns) to leave the laboratory until they are sure it will be accepted. [The Michigan Technic, November 1937]

This became Middle English blindfellen "to strike blind," also "to cover (the eyes) to block vision" (c. 1200). This was most common in the past-participle, blindfelled, blindfeld," whence the -d was, in the 15th c., erroneously admitted to the stem of the vb." [OED]. It was further altered early 16c. by similarity to fold, from the notion of "folding" a band of cloth over the eyes. Related: Blindfolded; blindfolding.
Related entries & more
fantasy (n.)

early 14c., "illusory appearance," from Old French fantaisie, phantasie "vision, imagination" (14c.), from Latin phantasia, from Greek phantasia "power of imagination; appearance, image, perception," from phantazesthai "picture to oneself," from phantos "visible," from phainesthai "appear," in late Greek "to imagine, have visions," related to phaos, phōs "light," phainein "to show, to bring to light" (from PIE root *bha- (1) "to shine").

Sense of "whimsical notion, illusion" is pre-1400, followed by that of "fantastic imagination," which is first attested 1530s. Sense of "day-dream based on desires" is from 1926. In early use in English also fantasie, phantasy, etc. As the name of a fiction genre, by 1948.

Past the near meadows, over the still stream,

Up the hill-side; and now 'tis buried deep

Was it a vision, or a waking dream?

Fled is that music:" Do I wake or sleep?

[Keats, from "Ode to a Nightingale"] 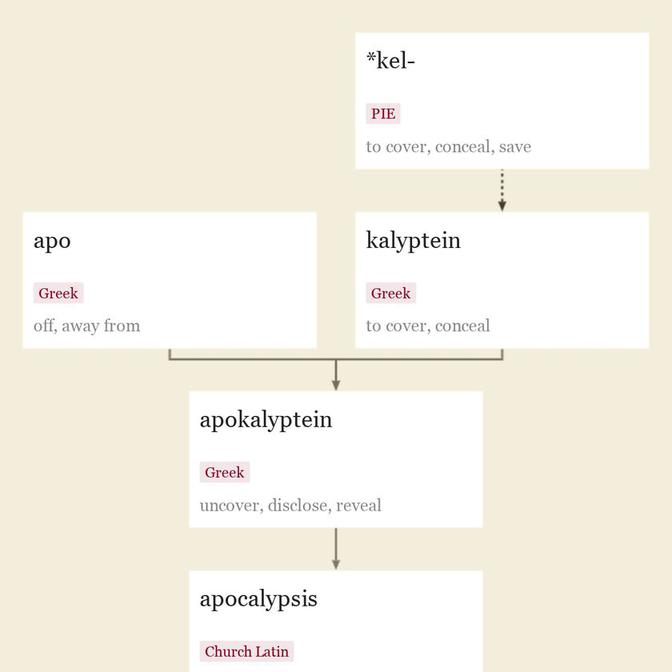 late 14c., "revelation, disclosure," from Church Latin apocalypsis "revelation," from Greek apokalyptein "uncover, disclose, reveal," from apo "off, away from" (see apo-) + kalyptein "to cover, conceal" (from PIE root *kel- (1) "to cover, conceal, save"). The Christian end-of-the-world story is part of the revelation in John of Patmos' book "Apokalypsis" (a title rendered into English as pocalipsis c. 1050, "Apocalypse" c. 1230, and "Revelation" by Wyclif c. 1380).

Its general sense in Middle English was "insight, vision; hallucination." The general meaning "a cataclysmic event" is modern (not in OED 2nd ed., 1989); apocalypticism "belief in an imminent end of the present world" is from 1858. As agent nouns, "author or interpreter of the 'Apocalypse,'" apocalypst (1829), apocalypt (1834), and apocalyptist (1824) have been tried.

"a drama sung" [Klein], "a form of extended dramatic composition in which music is essential and predominant," 1640s, from Italian opera, literally "a work, labor, composition," from Latin opera "work, effort" (Latin plural regarded as feminine singular), secondary (abstract) noun from operari "to work," from opus (genitive operis) "a work" (from PIE root *op- "to work, produce in abundance"). Explained in "Elson's Music Dictionary" as, "a form of musical composition evolved shortly before 1600, by some enthusiastic Florentine amateurs who sought to bring back the Greek plays to the modern stage."

As a branch of dramatic art, it is attested from 1759. First record of opera glass "small binoculars to aid vision at the theater" is from 1738. Opera-house, "theater devoted chiefly to opera performances," is from 1720.

The name introduced in England by the Crusaders (a vision of St. George played a key role in the First Crusade), but not common until after the Hanoverian succession (18c.). St. George began to be recognized as patron of England in time of Edward III, perhaps because of his association with the Order of the Garter (see garter). His feast day is April 23. The legend of his combat with the dragon is first found in "Legenda Aurea" (13c.). The exclamation by (St.) George! is recorded from 1590s.

The cult of George reached its apogee in the later Middle Ages: by then not only England, but Venice, Genoa, Portugal, and Catalonia regarded him as their patron: for all he was the personification of the ideals of Christian chivalry. ["The Oxford Dictionary of Saints"]