1590s, from French adhérer "to stick, adhere" (15c., corrected from earlier aderer, 14c.) or directly from Latin adhaerare "to stick, cling to," from ad "to" (see ad-) + haerere "to stick" (see hesitation). Originally often of persons, "to cleave to a leader, cause, party, etc." (compare adherent (n.), which still often retains this sense). Related: Adhered; adhering.

mid-15c., "steady attachment of the mind or feelings to a person, cause, belief, etc.," from Old French adhérence, from Medieval Latin adhaerentia, abstract noun from Latin adhaerent-, present participle stem of adhaerare "stick to," from ad "to" (see ad-) + haerere "to stick" (see hesitation). Rare in a physical sense, adhesion being the usual word for that.

early 15c., "follower, supporter, one who upholds (a leader, cause, etc.)," from Old French adherent or directly from Latin adhaerentem (nominative adhaerens), present participle of adhaerere "stick to," from ad "to" (see ad-) + haerere "to stick" (see hesitation). Meaning "adhesive substance" is from 1912. 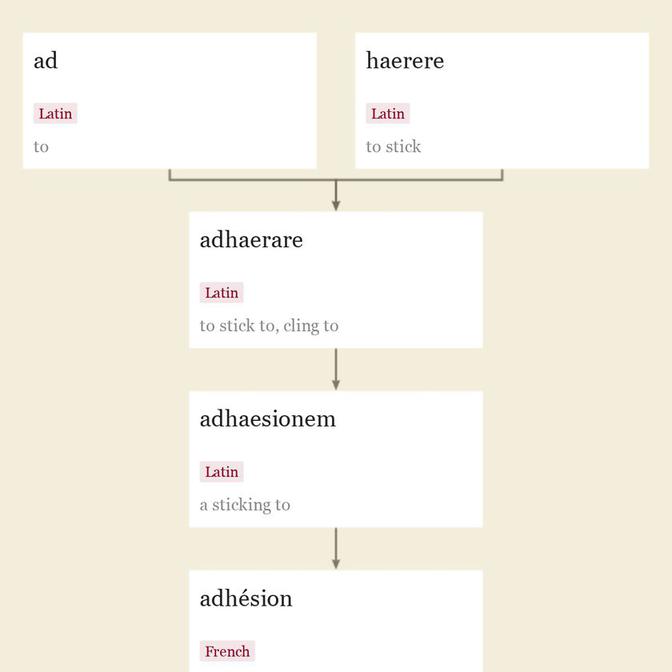 1620s, "act or state of sticking or being stuck, a being united or attached," from French adhésion or directly from Latin adhaesionem (nominative adhaesio) "a sticking to," noun of action from past-participle stem of adhaerare "to stick to, cling to," from ad "to" (see ad-) + haerere "to stick" (see hesitation). The earliest English use is of persons ("faith is adhesion unto God"), but by 18c. adhesion was "generally used in the material, and adherence in the metaphysical sense." [Johnson]

"indifferent, non-essential, morally neither right nor wrong," 1630s, from Greek adiaphoros "not different; indifferent," from a- "not" (see a- (3)) + diaphoros "different."