mid-15c., a term in logic, "that which is said of a subject," from Old French predicat and directly from Medieval Latin predicatum, from Latin praedicatum "that which is said of the subject," noun use of neuter past participle of praedicare "assert, proclaim, declare publicly," from prae- "forth, before" (see pre-) + dicare "proclaim" (from PIE root *deik- "to show," also "pronounce solemnly," and see diction).

The grammatical sense of "the word or words which express what is said of a subject in a proposition" is from 1630s. Related: Predicative; predicator; predicatory.

Zen paradox meant to stimulate the mind, 1918, from Japanese ko "public" + an "matter for thought."

Related entries & more
in re (prep.) 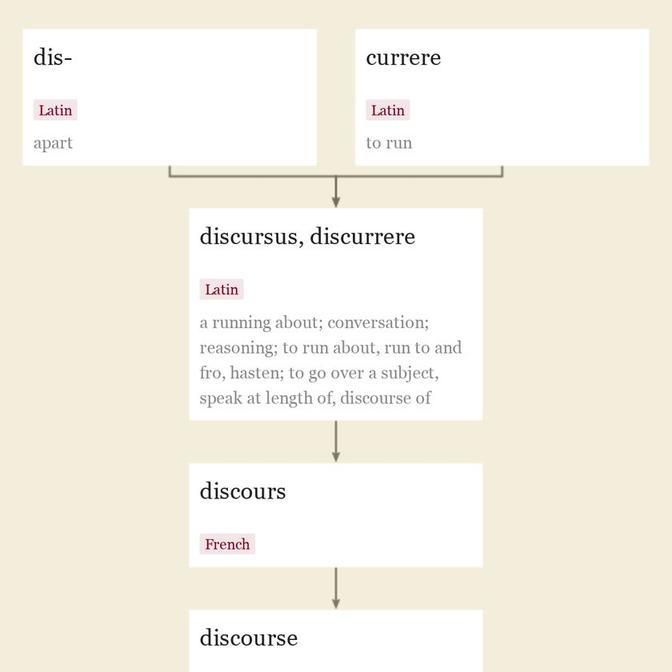 late 14c., "process of understanding, reasoning, thought," from French discours, from Latin discursus "a running about," in Late Latin "conversation," in Medieval Latin "reasoning," noun use of past participle of discurrere "to run about, run to and fro, hasten," in Late Latin "to go over a subject, speak at length of, discourse of," from dis- "apart" (see dis-) + currere "to run" (from PIE root *kers- "to run").

Meaning "a running over a subject in speech, communication of thought in words" is from 1550s; sense of "discussion or treatment of a subject in formal speech or writing," is from 1580s.

"operation of making (something) a matter of profit above other considerations," 1885, from commercialize + noun ending -ation.