Mexican dish made with a fried tortilla rolled around a filling and served with chili sauce, 1876, American English, from Mexican Spanish enchilada, fem. past participle of enchilar "season with chili," from en- "in" + chile "chili" (see chili).

You never ate enchilada, did you? I hope you never will. An enchilada looks not unlike an ordinary flannel cake rolled on itself and covered with molasses. The ingredients which go to make it up are pepper, lye, hominy, pepper, onions chopped fine, pepper, grated cheese, and pepper. [The Health Reformer, December 1876] 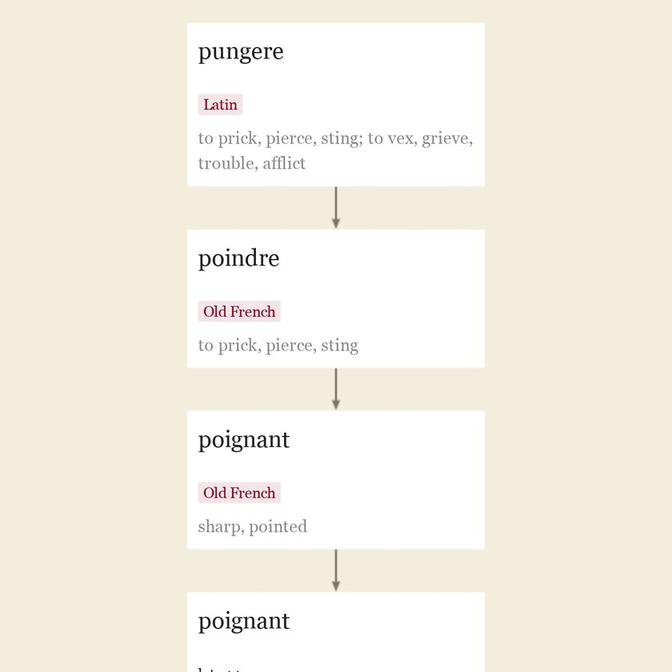 The sense of "sharp to the taste" is now obsolete. The word contains an etymological double-reverse. Latin pungere is from the same root as Latin pugnus "fist," and represents a Latin metathesis of -n- and -g- that was reversed in French.

mid-14c. (implied in Tartary, "the land of the Tartars"), from Medieval Latin Tartarus, from Persian Tatar, first used 13c. in reference to the hordes of Ghengis Khan (1202-1227), said to be ultimately from Tata, a name of the Mongols for themselves. Form in European languages probably influenced by Latin Tartarus "hell" (e.g. letter of St. Louis of France, 1270: "In the present danger of the Tartars either we shall push them back into the Tartarus whence they are come, or they will bring us all into heaven").

The historical word for what now are called in ethnological works Tatars. A Turkic people, their native region was east of the Caspian Sea. Ghengis' horde was a mix of Tatars, Mongols, Turks, etc. Used figuratively for "savage, rough, irascible person" (1660s). To catch a Tartar "get hold of what cannot be controlled" is recorded from 1660s; original sense not preserved, but probably from some military story similar to the old battlefield joke:

Irish soldier (shouting from within the brush): I've captured one of the enemy.

Captain: Well, then, you come here.

Soldier: I would, but he won't let me.

Among the adjectival forms that have been used are Tartarian (16c.), Tartarous (Ben Jonson), Tartarean (17c.); Byron's Tartarly (1821) is a nonce-word (but a good one). Tartar sauce is attested by 1855, from French sauce tartare.

1520s, "a sensation of taste, a flavor distinctive of anything," alteration of reles "scent, taste, aftertaste," (c. 1300), from Old French relais, reles, "something remaining, that which is left behind," from relaisser "to leave behind," from Latin relaxare "loosen, stretch out," from re- "back" (see re-) + laxare "loosen" (from PIE root *sleg- "be slack, be languid").

Especially "a pleasing taste," hence "pleasing quality" in general. The meaning "enjoyment of the taste or flavor of something" is attested from 1640s. The sense of "condiment, that which is used to impart a flavor to plain food to increase the pleasure of eating it" is recorded by 1797, especially a piquant sauce or pickle: The modern stuff you put on hot dogs (or don't) is a sweet green pickle relish.

a kind of Indian dish or the sauce used upon it, 1590s (as carriel), probably adopted into English via Portuguese caril and its plural caris, and ultimately derived from mingling of various south Indian (Dravidian) words including Middle Kannada, Middle Tamil and Malayalam kari, often indicating something "black in color" or "burnt," and thus applied broadly to spices and meats. In modern Indian cookery, "curry" refers to spice blends with turmeric as their key ingredient; spice blends without turmeric are called masala.

Of European dishes spiced after the Indian style, 1747 in British English. As the spice blend used in making the sauce, 1780. Extended to exotic, spicy sauces from outside of India (Thai curry, Indonesian curry, etc.) by 1680s. The verb meaning "flavor with curry" is by 1839.

The Murraya koenigii or Bergera koenigii is called curry tree, in English by 1822, probably through one of the south Indian languages. The kari name of the plant comes from the perceived blackness of the leaves (compare the Sanskrit name of the tree, krshnaneembapatram "black neem leaf.")

[William Dunbar, Treatis of the Twa Mariit Women and the Wedo, ca. 1508]

mid-14c., "rule, control," verbal noun from dress (v.). In some Middle English uses also short for addressing. In cookery, "sauce used in preparing a dish for the table," from c. 1500. Meaning "bandage applied to a wound or sore" is by 1713.

Dressing-gown "a loose and easy robe worn while applying make-up or doing the hair" is attested from 1777; dressing-room "room intended to be used for dressing" is from 1670s. Dressing-up "act or fact of attiring oneself with attention to style and fashion" is by 1852. Dressing-down (n.) "a reprimand" is by 1839, American English, originally "a thrashing," perhaps ironic or extended from some 19c. mechanical or commercial sense.

type of mixed drink, 1630s; since 17c. traditionally said to derive from Hindi panch "five," in reference to the number of original ingredients (spirits, water, lemon juice, sugar, spice), from Sanskrit panchan-s, from pancha "five" (from PIE root *penkwe- "five"). But there are difficulties (see OED), and connection to puncheon (n.1) is not impossible. Dutch punch, German Punch, French punch, etc. are said to be from English.

The Hind. panch does not seem to occur alone in the sense of 'punch,' but it is much used in composition to denote various mixtures of five things, as, panchamrit, a mixture of milk, curds, sugar, glue, and honey, panch-bhadra, a sauce of five ingredients, panch-pallar, a medical preparation from the sprouts of five trees, etc. [Century Dictionary]

in cookery, a mixture of diced vegetables, 1815, from French, evidently named for Charles Pierre Gaston François, duc de Mirepoix (1699-1757), French diplomat. The concoction supposedly was created by his head chef and named in his honor during the reign of Louis XV, one of the grand epochs of French cookery, when it was the style of the aristocracy to have dishes named in their honor.

MIREPOIX.—It is probable that one of these days the common sense of mankind will rise in rebellion against this word and abolish it. What is the Duke of Mirepoix to us because his wife was amiable to Louis XV.?

If she be not fair to me,

What care I how fair she be?