The meaning "pattern or gauge for shaping a piece of work" is first recorded 1819 in this form, earlier temple (1680s); the form was altered mid-19c., probably influenced by plate [Barnhart], but the pronunciation did not begin to shift until more recently (templet is still the primary entry for the word in Century Dictionary).
Related entries & more
Advertisement
swag (n.)
1650s, "a lurching or swaying," from swag (v.). Meaning "ornamental festoon" (1794) is said to be probably a separate development from the verb (but see swage). Swag lamp attested from 1966.

Colloquial sense of "promotional material" (from recording companies, etc.) was in use by 2001; swag was English criminal's slang for "quantity of stolen property, loot" from c. 1839. This might be related to earlier senses of "round bag" (c. 1300) and "big, blustering fellow" (1580s), which may represent separate borrowings from the Scandinavian source. "The primary meaning was 'a bulging bag'" [Klein].
Related entries & more
lymphatic (adj.)
1640s, from Modern Latin lymphaticus "pertaining to the lymph," from Latin lympha (see lymph). The English word also sometimes is used in what was the primary sense of lymphaticus in classical Latin, "mad, frenzied." OED reports this meaning "difficult to account for," but perhaps due to association of lympha with nymphe; compare Greek nymphian "to be frenzy-stricken." Also sometimes in reference to the appearance or temperament of one thought to suffer from excess of lymph, "dull, sluggish, slow in thought or action, with flabby muscles and pale skin" (1834).
Related entries & more
pulverize (v.)

early 15c., pulverisen, "reduce to powder or dust," from Late Latin pulverizare "reduce to powder or dust," from Latin pulvis (genitive pulveris) "dust, powder," which perhaps is related to Latin pollen "mill dust; fine flour" (and thus the other words under pollen), but de Vaan and others find that "the semantic connection of 'dust' with 'chaff' is uncompelling" because flour and chaff "are each other's opposite when processing grain. Of course, via a primary meaning 'to grind' or 'fine dust', they may be connected." Figurative sense of "break down, demolish" is by 1630s. Related: Pulverized; pulverizing; pulverizable.

early 15c., "a concommitant symptom;" 1530s, "a secondary signification, that which is included in the meaning of a word besides its primary denotation," from Medieval Latin connotationem (nominative connotatio), noun of action from past-participle stem of connotare "signify in addition to the main meaning," a term in logic, literally "to mark along with," from assimilated form of Latin com "with, together" (see con-) + notare "to mark, note, make a note," from nota "mark, sign, means of recognition" (see note (n.)). Meaning "that which constitutes the meaning of a word" (1829) originated with J.S. Mill.

type of corded fabric having a silk warp and a weft of wool heavier than the silk, 1710, from French papeline "cloth of fine silk and worsted" (1660s), probably from Provençal papalino, fem. of papalin "of or belonging to the pope," from Medieval Latin papalis "papal" (see papal). The reference is to Avignon, papal residence during the schism 1309-1408 (and regarded as a papal town until 1791), which also was a center of silk manufacture. Influenced in English by Poperinghe, town in Flanders where the fabric was made (but from 18c. the primary source was Ireland).

Related entries & more
accidence (n.)
late 14c., in philosophy, "non-essential or incidental characteristic," also "part of grammar dealing with inflection" (mid-15c.), in some cases a misspelling of accidents, or else directly from Latin accidentia (used as a term in grammar by Quintilian), neuter plural of accidens, present participle of accidere "to happen, fall out; fall upon" (see accident). The grammar sense is because they are qualities which change in accordance with use (as gender, number, tense, case) but are not essential to the primary signification.
Related entries & more
police (n.) 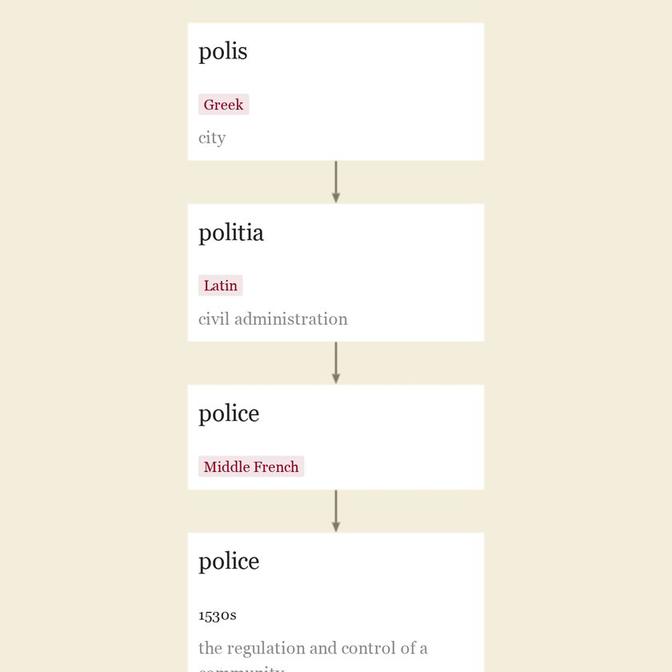 Being in genteel society, we would not, of course, hint that any one of our readers can remember so very low and humiliating a thing as the first visit to "my Uncle"—the first pawnbroker. We have been assured though, by those whose necessities have sometimes compelled them to resort, for assistance, to their avuncular relation, that the first visit—the primary pawning—can never be forgotten. [Household Words, May 15, 1852]

Meaning "of or pertaining to alphabetic letters" is from late 14c. Meaning "concerned with letters and learning, learned, scholarly" is from mid-15c. Sense of "verbally exact, according to the letter of verbal expression" is attested from 1590s, as is application to the primary sense of a word or passage. Literal-minded is attested from 1791.
Related entries & more