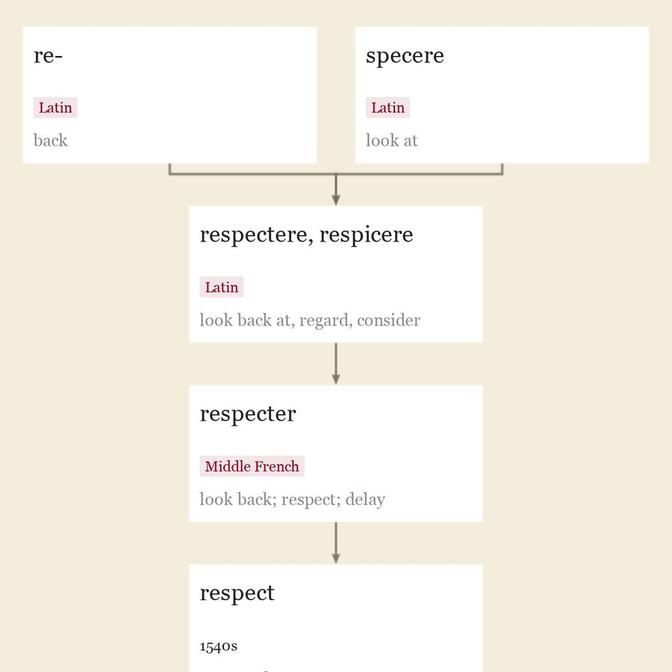 1540s, "to regard, notice with especial attention," from French respecter "look back; respect; delay" (16c.), from Latin respectere, frequentative of respicere "look back at, regard, consider," from re- "back" (see re-) + specere "look at" (from PIE root *spek- "to observe").

The meaning "treat with deferential esteem, regard with some degree of reverence" is from 1550s. The sense of "refrain from injuring or interfering with" is from 1620s. The meaning "have reference to, relate to" is from 1560s. Related: Respected; respecting.

To respect the person was "show undue bias toward (or against) based on regard for the outward circumstances of a person;" hence respecter of persons, usually with negative, from Acts x:34, in the 1611 translation.

late 14c., from Old French inspeccion "inspection, examination" (13c., Modern French inspection), from Latin inspectionem (nominative inspectio) "a looking into," noun of action from past participle stem of inspicere "look at, observe, view; look into, inspect, examine," from in- "into" (from PIE root *en "in") + specere "to look" (from PIE root *spek- "to observe"). Old English used onbesceawung as a loan-translation of Latin inspectio. Related: Inspectional.

Transferred sense of "terrifyingly ugly person" is from 1520s. Their names were Medusa, Euryale, and Stheino, but when only one is mentioned, Medusa usually is meant. Slain by Perseus, her head was fixed on the aegis of Athena.

1630s, "action of looking back," noun of action from past-participle stem of Latin retrospicere "look back," from retro "back" (see retro-) + specere "look at" (from PIE root *spek- "to observe"). Specifically "act of looking back on times past" (1729).

Related entries & more
inspector (n.)
c. 1600, "overseer, superintendent," from Latin inspector "one who views or observes," agent noun from past participle stem of inspicere "look at, observe, view; look into, inspect, examine," from in- "into" (from PIE root *en "in") + specere "to look" (from PIE root *spek- "to observe"). As a police ranking between sergeant and superintendent, it dates from 1840. Related: Inspectorial (1752). Of the 18c. feminine formations, inspectrix (1703) is earlier than inspectress (1737).
Related entries & more
Advertisement
perspicuous (adj.)

late 15c., "capable of being seen through" (a sense now obsolete), from Latin perspicuus "transparent, clear, evident," from perspicere "look through, look closely at" (see perspective). From 1580s as "clear to the understanding, not obscure or ambivalent." Related: Perspicuously; perspicuousness.

"look inquisitively, look closely or with scrutinizing curiosity," c. 1300, prien "to peer in," a word of unknown origin, perhaps related to late Old English bepriwan "to wink." Related: Pried; prying. As a noun, "act of prying, curious or close inspection," from 1750; meaning "inquisitive, intrusive person" is from 1845.

"state or character of being perspicacious; keenness of sight, clearness of understanding," 1540s, from French perspicacité (15c.) and directly from Late Latin perspicacitas "sharp-sightedness, discernment," from Latin perspicax "sharp-sighted, having the power of seeing through," from perspicere "look through, look closely at," from per "through" (from PIE root *per- (1) "forward," hence "through") + specere "look at" (from PIE root *spek- "to observe"). An earlier word was perspicience "ability to see all things, infinite vision" (c. 1400).