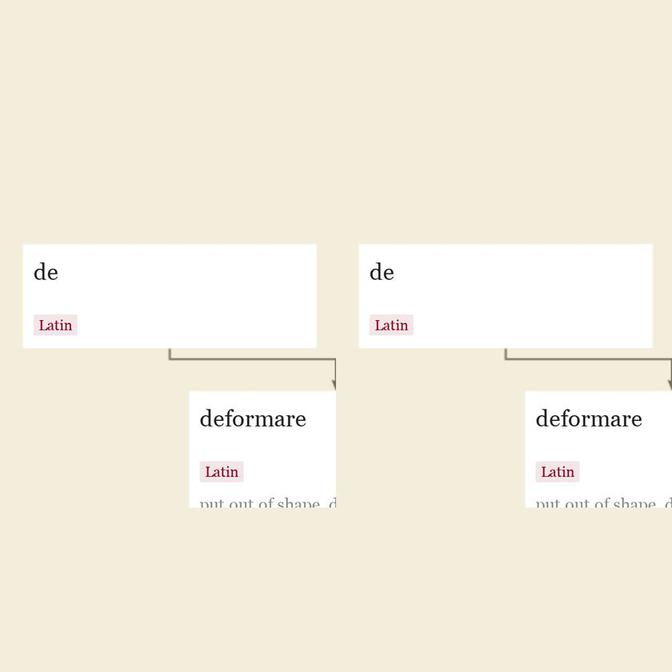 1510s, "act of adjusting or bringing into conformity," from Latin conformationem (nominative conformatio) "a symmetrical forming," noun of action from past participle stem of conformare "to fashion, to form, to shape; educate; modify," from assimilated form of com "together" (see con-) + formare "to form" (see form (v.)). Meaning "manner in which a body is formed" is from 1640s.

1670s, "wedge-shaped," from French cunéiforme (16c.), from Latin cuneus "a wedge, wedge-shaped thing," which is of unknown origin, + French -forme (see form (n.)). German physician and traveler Engelbert Kämpfer (1681-1716) first applied the word to characters in ancient Middle Eastern inscriptions made with wedge-shaped writing tools; in English this sense is attested from 1818. As a noun, "cuneiform writing," by 1862.

early 15c., conformyte, conformite, "similarity, correspondence in form or manner," from Old French conformité (14c.), from Late Latin conformitatem (nominative conformitas), from conformis "similar in shape," from conformare "to fashion, to form, to shape; educate; modify," from assimilated form of com "together" (see con-) + formare "to form" (see form (v.)). Meaning "action in accordance with some standard" is from late 15c.; that of "adherence to the Church of England" is from 1620s. Modern spelling is from 17c.

With capital R-, in reference to the great 16c. European religious revolution, it is attested by 1540s, borrowed from Luther. The movement began as a bid to "reform" doctrines and practices of the Church of Rome.

mid-14c., confourmen, "be obedient (to God), comply," from Old French conformer "conform (to), agree (to), make or be similar, be agreeable" (13c.) and directly from Latin conformare "to fashion, to form, to shape; educate; modify," from assimilated form of com "together" (see con-) + formare "to form" (see form (v.)).

Meaning "to make of the same form or character; bring into harmony, make agreeable," and intransitive sense of "act in accordance with an example" are from late 14c. Sense of "to comply with the usages of the Church of England" is from 1610s; hence conformist (1630s), opposed to non-conformist or dissenter. Related: Conformance; conformed; conforming.

late 14c., reformen, "to convert into or restore to another and better form" (of strength, health, firmness, etc.), from Old French reformer "rebuild, reconstruct, recreate" (12c.) and directly from Latin reformare "to form again, change, transform, alter," from re- "again" (see re-) + formare "to form" (see form (n.)).

The meaning "change (someone or something) for the better, correct, improve; bring (someone) away from an evil course of life" is recorded from late 14c.; of governments, institutions, etc., from early 15c. Intransitive sense of "abandon wrongdoing or error" is by 1580s. Related: Reformed; reforming. Reformed churches (1580s) on the European continent were usually Calvinist as opposed to Lutheran (in France they were the Huguenots). Reformed Judaism (1843) is a movement initiated in Germany by Moses Mendelssohn (1729-1786). Reform school is attested from 1859.