"police officer, detective," 1920, apparently first in "The Shamus," a detective story published that year by Harry J. Loose (1880-1943), a Chicago police detective and crime writer; the book was marketed as "a true tale of thiefdom and an expose of the real system in crime." The word is said to be probably from Yiddish shames, literally "sexton of a synagogue" (according to Israel Zangwill "a potent personage only next in influence to the President"), from Hebrew shamash "servant." Probably influenced by Celtic Seamus "James," as a typical name for an Irish cop.

1530s, "a cleaning out, removal, clearance," from rid + -ance. The meaning "a deliverance from something superfluous or unwanted" is from 1590s. Good riddance, "a welcome relief from unpleasant company or an embarrassing connection" attested from 1650s. Shakespeare has gentle riddance (1590s); Middleton has fair riddance (1610s).

mid-15c., "charge for a booth at a fair," from cover + -age. The Middle English word fell from use (coverage is not in Century Dictionary, 1902). It was re-coined 1912, in American English, in the insurance sense " amount of protection given by a policy." Later extended to sports, media, etc.

open-air game played by two sides of 11 with bats, balls, and wickets, 1590s, apparently from Old French criquet "goal post, stick," perhaps from Middle Dutch/Middle Flemish cricke "stick, staff," which is perhaps from the same root as crutch. Sense of "fair play" is first recorded 1851, on the notion of "cricket as it should be played."

"scene of riotous disorder, heated argument," 1852, from Donnybrook Fair, which dated to c. 1200 but which by late 18c, had become proverbial for carousing and brawling, held in County Dublin until 1855. The place name is Irish Domhnach Broc "Church of Saint Broc."

The meaning "thin film of oil on water" is from 1970. As an adjective now only in poetic or archaic use, but in Middle English used after a woman's name, or as a noun, "fair one, beautiful woman."

mid-15c., serenite, "fair, calm, clear weather," from Old French (Modern French sérénité) and directly from Latin serenitatem (nominative serenitas) "clearness, serenity," from serenus (see serene). Of persons, "tranquility of mind or temper," by 1590s. Also formerly used as a title of honor for kings (mid-15c.), probably from the similar use of Latin serenitas, which was applied to Roman emperors and later to popes.

Related entries & more
blue-blood (adj.)
1809 in reference to the blood that flows in the veins of the old and aristocratic families of Spain, translating Spanish sangre azul, claimed by certain families of Castile that held themselves uncontaminated by Moorish or Jewish admixture; the term probably is from the notion of the visible veins of people of fair complexion. In reference to English families by 1827. As a noun, "member of an old and aristocratic family," by 1877. See blue (adj.1) + blood (n.).
Related entries & more
integrity (n.) 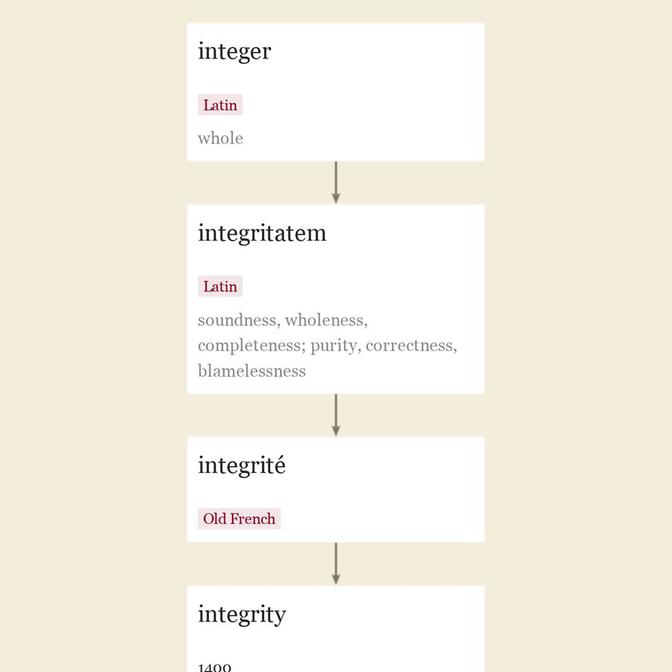 The sense of "wholeness, perfect condition" is attested from mid-15c.; that of "soundness of moral principle and character; entire uprightness or fidelity, especially in regard to truth and fair dealing" is by 1540s.