American-English sense of "man employed to have care of grazing cattle on the Great Plains for a stockman or ranch, doing his work on horseback" is by 1849. Earlier it was an insulting name for a band of marauding loyalists in the neighborhood of New York during the Revolution (1775). In figurative use by 1942 for "brash and reckless young man" (as an adjective meaning "reckless," from 1920s).

The oldest word for "one whose occupation is the care of cattle" is cowherd (late Old English). Cowhand is first attested 1852 in American English (see hand (n.)). Cowpoke (said to be 1881, not in popular use until 1940s) was said to be originally restricted to those who prodded cattle onto railroad cars with long poles. Cowboys and Indians as a children's game (imitating movie serials, etc.) is by 1941.

Related entries & more
wrangler (n.)
1510s, "one who takes part in quarrels," agent noun from wrangle (v.). Meaning "person in charge of horses or cattle, herder" is from 1888; as a proprietary name for a brand of jeans, trademarked 1947, claiming use from 1929.
Related entries & more
peculate (v.)

mid-15c., from ear (n.1) + mark (n.1). Originally a cut or mark in the ear of sheep and cattle, serving as a sign of ownership (also a punishment of certain criminals); recorded from 1570s in the figurative sense of "stamp of ownership." 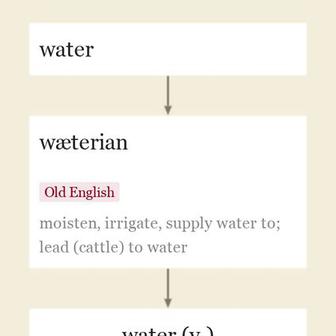 early 14c., o strai, "away from home; lost, wandering" (of cattle), borrowed and partially nativized from Old French estraie, past participle of estraier "astray, riderless (of a horse), lost," literally "on stray" (see stray (v.)). Figurative use is from late 14c.