early 15c., "a breaking of a bone," from Old French fracture (14c.) and directly from Latin fractura "a breach, break, cleft," from fractus, past participle of frangere "to break" (from PIE root *bhreg- "to break"). As "a broken surface" from 1794. 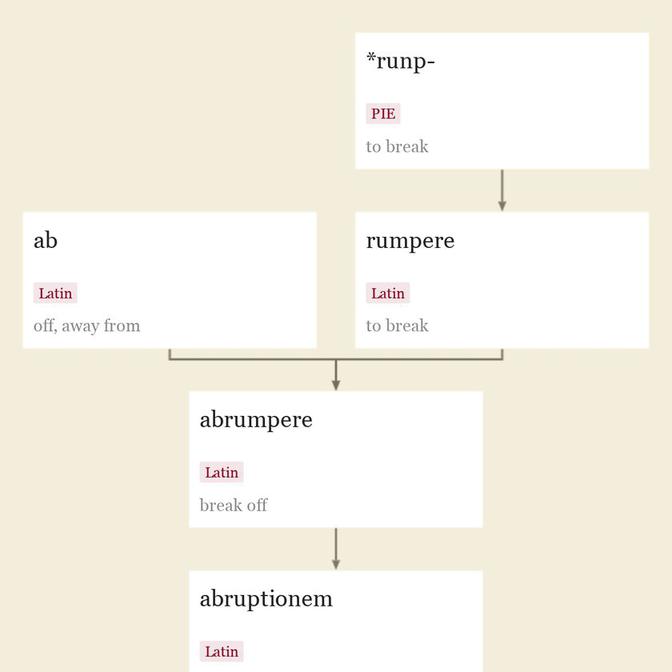 c. 1600, "a sudden breaking off," from Latin abruptionem (nominative abruptio) "a breaking off," noun of action from past-participle stem of abrumpere "break off," from ab "off, away from" (see ab-) + rumpere "to break," from a nasalized form of the PIE root *runp- "to break" (see corrupt (adj.)).

"regularly recurring phrase in a poem, chorus, or song," late 14c., refreine, from Old French refrain "chorus" (13c.), an alteration of refrait, a noun use of the past participle of refraindre "to repeat," also "to break off," from Vulgar Latin *refrangere "break off," alteration of Latin refringere "break up, break open" (see refraction) by influence of frangere "to break."

The word was further influenced in French by cognate Provençal refranhar "singing of birds, refrain." The notion is of something that causes a song to "break off" then resume. OED says not common before 19c. For "act of refraining," refraining (mid-14c.) and refrainment (1711) have been used.

late 14c., "a break of continuity," from Latin interruptionem (nominative interruptio) "a breaking off, interruption, interval," noun of action from past participle stem of interrumpere "to break apart, break off" (see interrupt (v.)). Meaning "a breaking in upon some action" is from c. 1400; that of "a pause, a temporary cessation" is early 15c.

early 15c., "small piece or part," from Latin fragmentum "a fragment, remnant," literally "a piece broken off," from base of frangere "to break" (from PIE root *bhreg- "to break"). 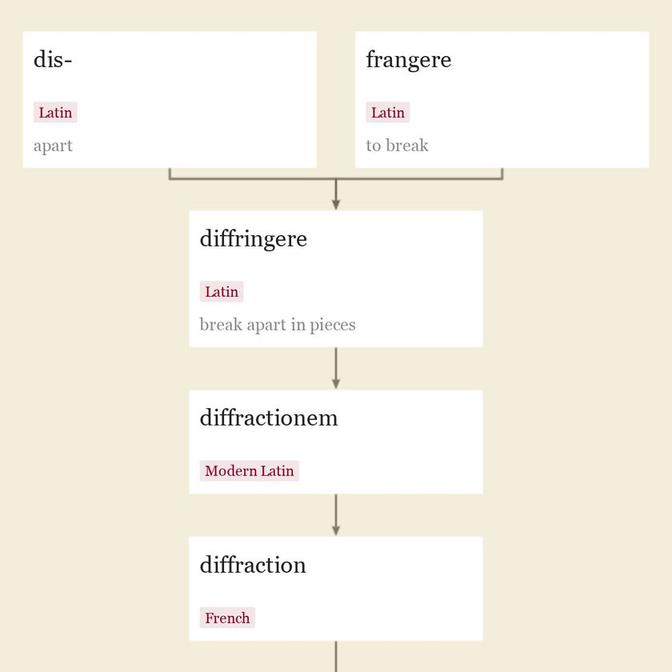 in optics, "the spreading of light or deflection of its rays," 1670s, from French diffraction (17c.) or directly from Modern Latin diffractionem (nominative diffractio), noun of action from past-participle stem of Latin diffringere "break apart in pieces," from dis- "apart" (see dis-) + frangere "to break" (from PIE root *bhreg- "to break").

"to break into," 1805 (implied in irrupted), back-formation from irruption or else from Latin irruptus, past participle of irrumpere "to break in, burst into."

1510s, "liable to sin, morally weak;" c. 1600, "liable to break;" a back-formation from fragility, or else from French fragile (Old French fragele, 14c.), from Latin fragilis "easily broken," from root of frangere "to break" (from PIE root *bhreg- "to break"). Transferred sense of "of frail constitution" (of persons) is from 1858.