silver-white fluid metallic element, late 14c., from Medieval Latin mercurius, from Latin Mercurius (see Mercury). Prepared in ancient times from cinnabar, it was one of the seven metals (bodies terrestrial) known to the ancients, which were coupled in astrology and alchemy with the seven known heavenly bodies. This one probably was associated with the planet for its mobility. The others were Sun/gold, Moon/silver, Mars/iron, Saturn/lead, Jupiter/tin, Venus/copper.

The Greek name for it was hydrargyros "liquid silver," which gives the element its symbol, Hg. Compare quicksilver, which is its popular name. It has a freezing point of -39° C. The use of the word in reference to temperature or state of the atmosphere (by 1756) is from its use in thermometers and barometers.

late 14c., "a communicable disease; a harmful or corrupting influence," from Old French contagion and directly from Latin contagionem (nominative contagio) "a touching, contact," often in a bad sense, "a contact with something physically or morally unclean, contagion," from contingere "to touch," from assimilated form of com "with, together" (see con-) + tangere "to touch," from PIE root *tag- "to touch, handle." Meaning "infectious contact or communication" is from 1620s.

A distinction between contagion and infection is sometimes adopted, the former being limited to the transmission of disease by actual contact of the diseased part with a healthy absorbent or abraded surface, and the latter to transmission through the atmosphere by floating germs or miasmata. There are, however, cases of transmission which do not fall under either of these divisions, and there are some which fall under both. In common use no precise discrimination of the two words is attempted. [Century Dictionary, 1897]

Dr. Piorry, in a second communication, insists upon the fact, that in a great number of cases the decaying contents of the uterus, and the putrid infection of the blood from this source, constitute the so-called puerperal fever, and he thinks that the discussion in the Academy is only a fight about words, as the different speakers agree, without knowing it themselves, upon the nature of the disease. He proposes the name of septicemia, as best designating the sources of the disease, viz., from putrid infection from the uterus, and by the respiration of an atmosphere pregnant with septic particles. ... The admission of this septicemia explains the putrid accidents, as observed in men, the foetus, and wounded persons during a puerperal epidemic. [E. Noeggerath and A. Jacobi, "Contributions to Midwifery," New York, 1859]

Used figuratively of something refreshing (late Old English), or suggestive of morning and youthful freshness (1530s). As a verb, "to wet with or as with dew," Old English deawian.

The formation of dew is explained by the loss of heat by bodies on the earth's surface through radiation at night, by which means they and the air immediately about them are cooled below the dew-point ....Dew is thus deposited chiefly on bodies which are good radiators and poor conductors of heat, like grass; hence also it appears chiefly on calm and clear nights--that is, when the conditions are most favorable for radiation. It never appears on nights both cloudy and windy. In winter dew becomes hoar frost. [Century Dictionary] 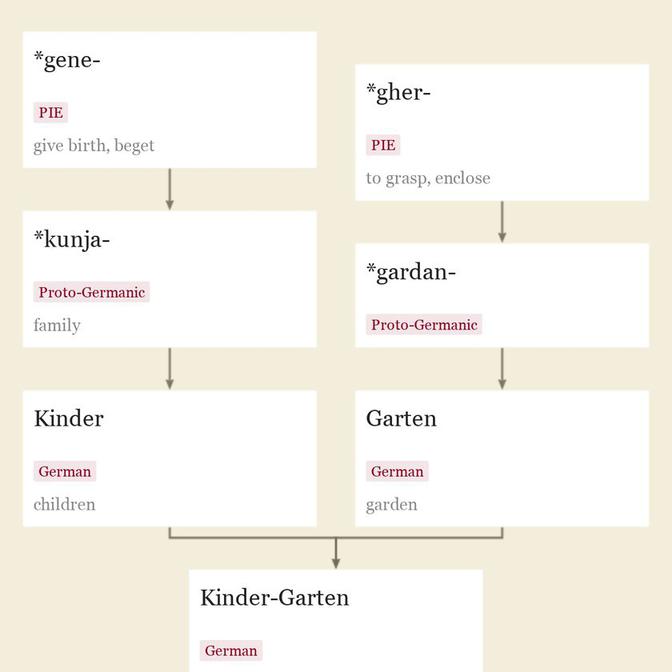 Kindergarten means a garden of children, and Froebel, the inventor of it, or rather, as he would prefer to express it, the discoverer of the method of Nature, meant to symbolize by the name the spirit and plan of treatment. How does the gardener treat his plants? He studies their individual natures, and puts them into such circumstances of soil and atmosphere as enable them to grow, flower, and bring forth fruit,-- also to renew their manifestation year after year. [Mann, Horace, and Elizabeth P. Peabody, "Moral Culture of Infancy and Kindergarten Guide," Boston, 1863]

The first in England was established 1850 by Johannes Ronge, German Catholic priest; in America, 1868, by Elizabeth Peabody of Boston, Mass. Taken into English untranslated, whereas other nations that borrowed the institution nativized the name (Danish börnehave, Modern Hebrew gan yeladim, literally "garden of children"). Sometimes partially Englished as kindergarden (a form attested by 1879).

Ancient geographers divided the earth into zones based on the angle of sun on the slope of the earth's surface and the length of daylight. Some reckoned 24 or 30 climates between Meroe on the upper Nile in Sudan and the mythical Riphaean Mountains which were supposed to bound the Arctic; a change of climate took place, going north, at a place where the day was a half hour longer or shorter, according to season, than the starting point. Others counted 7 (each dominated by a particular planet) or 12 (dominated by zodiac signs).

Change of temperature gradually came to be considered more important, and by late 14c. the word was being used in the sense "a distinct region of the earth's surface considered with respect to weather." The sense shift to "combined results of weather associated with a region, characteristic condition of a country or region with reference to the variation of heat, cold, rainfall, wind, etc.," is attested by c. 1600. Figuratively, of mental or moral atmosphere, from 1660s.

Sense of "unmoved by strong feeling" was in late Old English. Meaning "having a relatively low temperature, not heated" is from mid-13c. Sense of "dead" is from mid-14c. Meaning "not strong, affecting the senses only slightly" (in reference to scent or trails in hunting or tracking) is from 1590s; hence the extended sense in seeking-games, "distant from the object of search" (1864).

Cold front in weather is from 1921. Cold sweat is by 1630s. Cold-call (v.) in the sales pitch sense is recorded by 1964 (implied in cold-calling; the noun cold call is by 1953; cold-selling is from 1947). Cold comfort (by 1650s) is "little comfort, something which offers little cheer." Cold-cream "cooling unguent for the skin" is from 1709. To throw cold water on in the figurative sense "discourage by unexpected reluctance or indifference" is from 1808.

Japanese has two words for "cold:" samui for coldness in the atmosphere or environment; tsumetai for things which are cold to touch, and also in the figurative sense, with reference to personalities, behaviors, etc.