"brief, familiar proverb," 1540s, French adage (16c.), from Latin adagium "adage, proverb," apparently a collateral form of adagio, from ad "to" (see ad-) + *agi-, root of aio "I say," which is perhaps cognate with Armenian ar-ac "proverb," asem "to say." But some find this unlikely and suggest the second element might be related to agein "set in motion, drive, urge" (from PIE root *ag- "to drive, draw out or forth, move"). Related: Adagial.

c. 1746, in music, "slowly, leisurely and gracefully," Italian, a contraction of ad agio, from ad "to, at" (see ad-) + agio "leisure," from Vulgar Latin *adiacens, present participle of adiacere "to lie at, to lie near" (compare adjacent). In noun sense of "a slow movement," first attested 1784.

The name also was used to signify the evil inherent in human nature (as a consequence of Adam's fall), and other qualities (e.g. nakedness, gardening) associated with the biblical Adam. Adam's ale for "water" is colloquial from 1640s. To not know(someone)from Adam "not know him at all" is recorded by 1784 (with later elaborations up to from Adam's off ox, 1880). The pet form of the name in Middle English was Addy, hence Addison; other old pet forms (Adkin, Adcock) also survive in surnames.

It is a noun use of an adjective meaning "unbreakable, inflexible," which was metaphoric of anything unalterable (such as Hades) and is of uncertain origin. It is perhaps literally "invincible, indomitable," from a- "not" (see a- (3)) + daman "to conquer, to tame," from PIE root *deme- "to constrain, force, break (horses)," for which see tame (adj.). "But semantically, the etymology is rather strange," according to Beekes, who suggests it might be a foreign word altered in Greek by folk etymology, and compares Akkadian (Semitic) adamu.

Applied in antiquity to a metal resembling gold (Plato), white sapphire (Pliny), magnet (Ovid, perhaps through confusion with Latin adamare "to love passionately"), steel, emery stone, and especially diamond, which is a variant of this word. "The name has thus always been of indefinite and fluctuating sense" [Century Dictionary]. The word had been in Old English as aðamans, but the modern word is a re-borrowing.

by 1630s as "human being, descendant of Adam" the Biblical first man, from Adam + -ite (1). The term was used from 1620s in reference to Christian perfectionist sects or groups that practice nudism (or, as a 1657 poem has it, "Cast off their petticoats and breeches"), recalling the state of Adam before the Fall. They existed in 2c. North Africa, 14c.-15c. central Europe, and 1840s America. Related: Adamic; Adamitic; Adamitism.

"bulge in the throat caused by the cartilage of the larynx," 1731, corresponding to Latin pomum Adami, perhaps an inexact translation of Hebrew tappuah haadam, literally "man's swelling," from ha-adam "the man" + tappuah "anything swollen."

The reference is to the legend that a piece of the forbidden fruit (commonly believed to have been an apple) that Eve gave Adam stuck in his throat. It is more prominent in men than women. The term is mentioned early 15c. as the name of an actual oriental and Mediterranean fruit, a variety of lime with an indentation fancied to resemble the marks of Adam's teeth. 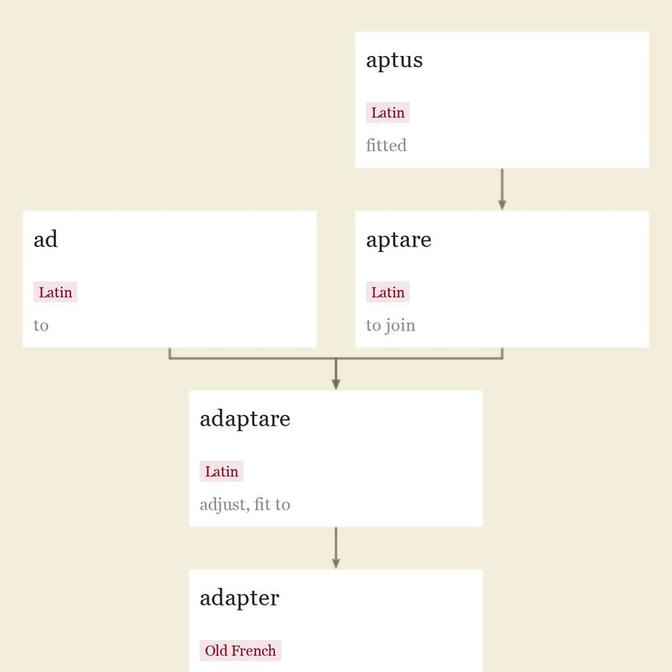 early 15c. (implied in adapted) "to fit (something, for some purpose)," from Old French adapter (14c.), from Latin adaptare "adjust, fit to," from ad "to" (see ad-) + aptare "to join," from aptus "fitted" (see apt). Intransitive meaning "to undergo modification so as to fit new circumstances" is from 1956. Related: Adapting.

"quality that renders adaptable," 1660s, from adapt + -ability. In modern use especially in evolutionary biology, "variability in respect to, or under the influence of, external conditions."