"trousers, drawers," 1840, see pantaloons. The word was limited to vulgar and commercial use at first.

I leave the broadcloth,—coats and all the rest,—

A word not made for gentlemen, but "gents";

Colloquial singular pant is attested from 1893. To wear the pants "be the dominant member of a household" is by 1931. To do something by the seat of (one's) pants "by human instinct" is from 1942, originally of pilots, perhaps with some notion of being able to sense the condition and situation of the plane by engine vibrations, etc. To be caught with (one's) pants down "discovered in an embarrassing condition" is from 1932.

Personified in English from late 14c., on model of Latin Somnus, Greek Hypnos. Figurative use for "repose of death" was in Old English; to put (an animal) to sleep "kill painlessly" is recorded from 1923 (a similar imagery is in cemetery). Sleep deprivation attested from 1906. Sleep-walker "somnambulist" is attested from 1747; sleep-walking is from 1840. To be able to do something in (one's) sleep "easily" is recorded from 1953. Sleep apnea is by 1916.

The prefix shift to af- took place 16c. under mistaken belief that it was a Latin word in ad-; change of -th- to -d- took place late 16c. (and also transformed burthen, spither, murther, etc. into their modern forms).

The notion of "accomplish" (late Old English) gradually became "be able to bear the expense of, have enough money" to do something (late 14c.), and the original senses became obsolete. Of things, "be capable of yielding," 1580s, which is the sense in afford (one) an opportunity. Related: Afforded; affording.
Related entries & more
asphalt (n.)
early 14c., "hard, resinous mineral pitch found originally in Biblical lands," from Late Latin asphaltum, from Greek asphaltos "asphalt, bitumen," often said to be from Greek a- "not" + *sphaltos "able to be thrown down," taken as verbal adjective of sphallein "to throw down," according to Beekes "under the assumption that it denoted the material that protects walls from tumbling down," but he finds this proposed etymology "weak." Perhaps from Semitic [Klein, citing Lewy, 1895] or another non-Greek source.

Meaning "paving composition of tar and gravel" dates from 1847 and its popular use in this sense established the modern form of the English word, displacing in most senses asphaltum, asphaltos. As a verb meaning "to cover with asphalt," from 1872. Related: Asphaltic.
Related entries & more
possible (adj.)

"that may be, capable of existing, occurring, or being done," mid-14c., from Old French possible and directly from Latin possibilis "that can be done," from posse "be able" (see potent).

The only kind of object which in strict propriety of language can be called possible is the truth of a proposition ; and when a kind of thing is said to be possible, this is to be regarded as an elliptical expression, meaning that it is of such a general description that we do not know it does not exist. So an event or act is said to be possible, meaning that one would not know that it would not come to pass. But it is incorrect to use possible meaning practicable ; possible is what may be, not what can be. [Century Dictionary] 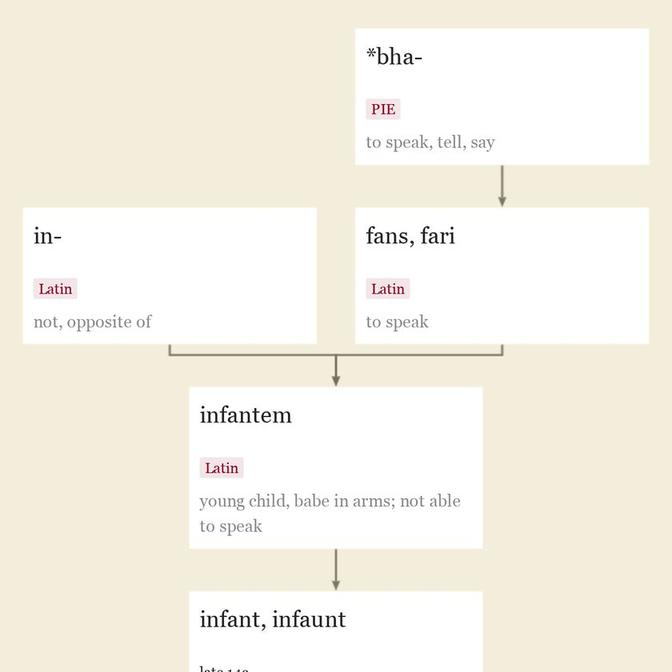 late 14c., infant, infaunt, "a child," also especially "child during earliest period of life, a newborn" (sometimes meaning a fetus), from Latin infantem (nominative infans) "young child, babe in arms," noun use of adjective meaning "not able to speak," from in- "not, opposite of" (see in- (1)) + fans, present participle of fari "to speak," from PIE root *bha- (2) "to speak, tell, say." As an adjective in English, 1580s, from the noun.

The Romans extended the sense of Latin infans to include older children, hence French enfant "child," Italian fanciullo, fanciulla. In English the word formerly also had the wider sense of "child" (commonly reckoned as up to age 7). The common Germanic words for "child" (represented in English by bairn and child) also are sense extensions of words that originally must have meant "newborn."
Related entries & more
*ghend-

It is the hypothetical source of/evidence for its existence is provided by: Greek khandanein "to hold, contain;" Lithuanian godėtis "be eager;" second element in Latin prehendere "to grasp, seize;" Welsh gannu "to hold, contain;" Russian za-gadka "riddle;" Old Norse geta "to obtain, reach; to be able to; to beget; to learn; to be pleased with;" Albanian gjen "to find."

coined 1931 by James Truslow Adams, U.S. writer and popular historian (unrelated to the Massachusetts Adamses), in "Epic of America."

[The American Dream is] that dream of a land in which life should be better and richer and fuller for everyone, with opportunity for each according to ability or achievement. It is a difficult dream for the European upper classes to interpret adequately, and too many of us ourselves have grown weary and mistrustful of it. It is not a dream of motor cars and high wages merely, but a dream of social order in which each man and each woman shall be able to attain to the fullest stature of which they are innately capable, and be recognized by others for what they are, regardless of the fortuitous circumstances of birth or position. [Adams]

Others have used the term as they will.

Proto-Indo-European root meaning "to be strong."

It is the hypothetical source of/evidence for its existence is provided by: Latin valere "be strong, be well, be worth;" Old Church Slavonic vlasti "to rule over;" Lithuanian valdyti "to have power;" Celtic *walos- "ruler," Old Irish flaith "dominion," Welsh gallu "to be able;" Old English wealdan "to rule," Old High German -walt, -wald "power" (in personal names), Old Norse valdr "ruler."

"of or pertaining to a nation or a country regarded as a whole; established and maintained by the nation; peculiar to the whole people of a country," 1590s, from French national (16c., from Old French nacion), and also from nation + -al (1). Opposed to local or provincial (or in the U.S., state).

Meaning "peculiar or common to the whole people of a country" is by 1620s. From 1802 as "established and maintained by the nation or its laws." As a noun, "citizen of a (particular) nation," from 1887. Related: Nationally.

National guard is from 1793, originally in reference to an armed force in France identified with the revolution; U.S. use is from 1847, originally a name sometimes given to the organized militia. National anthem is recorded by 1806.

A King though he's pestered with cares,

For the most part he's able to ban them;

But one comes in a shape he never can escape—