Advertisement
all
word
name
phrase
suffix
prefix
word root
46 entries found.
supply (n.)
early 15c., "assistance, relief, act of supplying," from supply (v.). Meaning "that which is provided, quantity or amount of something provided" is attested from c. 1600. Meaning "person who temporarily takes the place of another" (especially a minister or preacher) is from 1580s. In the political economy sense (corollary of demand (n.)) it dates from 1776; supply-side (adj.) in reference to economic policy is attested from 1976; as a noun by 1922. Supplies "necessary provisions held for distribution and use" is from c. 1650.
Related entries & more
Advertisement
pastor (n.)

late 14c. (mid-13c. as a surname), "shepherd, one who has care of a flock or herd" (a sense now obsolete), also figurative, "spiritual guide, shepherd of souls, a Christian minister or clergyman," from Old French pastor, pastur "herdsman, shepherd" (12c.) and directly from Latin pastor "shepherd," from pastus, past participle of pascere "to lead to pasture, set to grazing, cause to eat," from PIE root *pa- "to feed; tend, guard, protect." Compare pasture.

The spiritual sense was in Church Latin (e.g. Gregory's "Cura Pastoralis"). The verb in the Christian sense is from 1872. 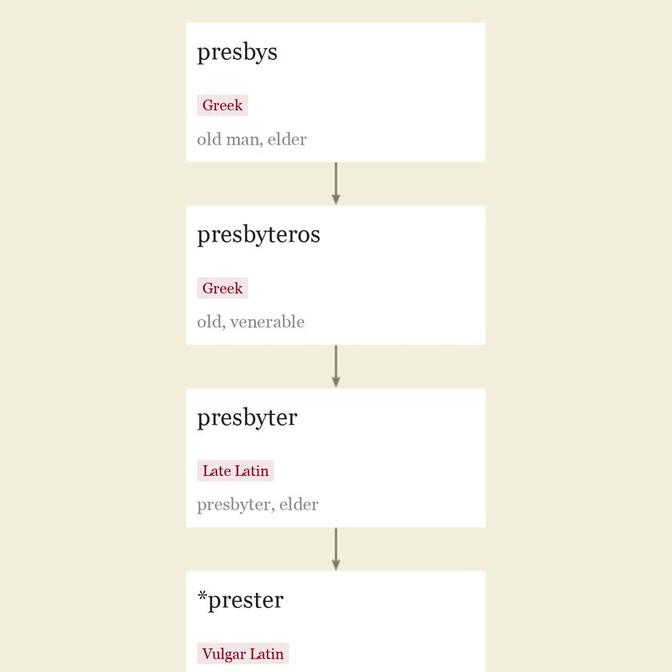 In Middle English also used generally for any man holding high Church office or anyone duly authorized to be a minister of sacred things; from c. 1200 of pagan and Muslim religious leaders. In the Old Testament sense (Old English), it is a translation of Hebrew kohen, Greek hiereus, Latin sacerdos.

Old English eorl "brave man, warrior, leader, chief" (contrasted with ceorl "churl"), from Proto-Germanic *erlaz, which is of uncertain origin. In Anglo-Saxon poetry, "a warrior, a brave man;" in later Old English, "nobleman," especially a Danish under-king (equivalent of cognate Old Norse jarl), then one of the viceroys under the Danish dynasty in England. After 1066 adopted as the equivalent of Latin comes (see count (n.1)).

Earl Gray tea (1880s) was originally a Chinese tea blended with bergamot oil, supposedly from a recipe given to Charles, second Earl Gray (the Whig prime minister), in the 1830s, but perhaps it was named later, commercially, in his honor.

The modern financial meaning "statement of probable expenditures and revenues" (1733) is from the notion of the treasury minister keeping his fiscal plans in a wallet. Also used from late 16c. in a general sense of "a stock, store, or collection of miscellaneous items," which led to 18c. transferred sense "bundle of news," hence the use of the word as the title of some newspapers.

Used generically for the several grades of Chinese officials; the Chinese equivalent is kwan "public servant." Sense of "chief dialect of Chinese" (spoken by officials and educated people and generally in the northern, central, and western provinces and Manchuria) is from c. 1600. Transferred sense of "important person" attested by 1907. The type of small, deep-colored orange so called from 1771, from resemblance of its color to that of robes worn by mandarins.

Related entries & more
snooker (n.)
1889, the game and the word said in an oft-told story to have been invented in India by British officers as a diversion from billiards. The name is perhaps a reference (with regard to the rawness of play by a fellow officer) to British slang snooker "newly joined cadet, first-term student at the R.M. Academy" (1872). Tradition ascribes the coinage to Col. Sir Neville Chamberlain (not the later prime minister of the same name), at the time subaltern in the Devonshire Regiment in Jubbulpore. One of the first descriptions of the game is in A.W. Drayson's "The Art of Practical Billiards for Amateurs" (1889), which states in a footnote "The rules of the game of snooker are the copyright of Messrs. Burroughes & Watts, from whom they may be obtained," they being manufacturers of billiard tables.
Related entries & more
policy (n.1) 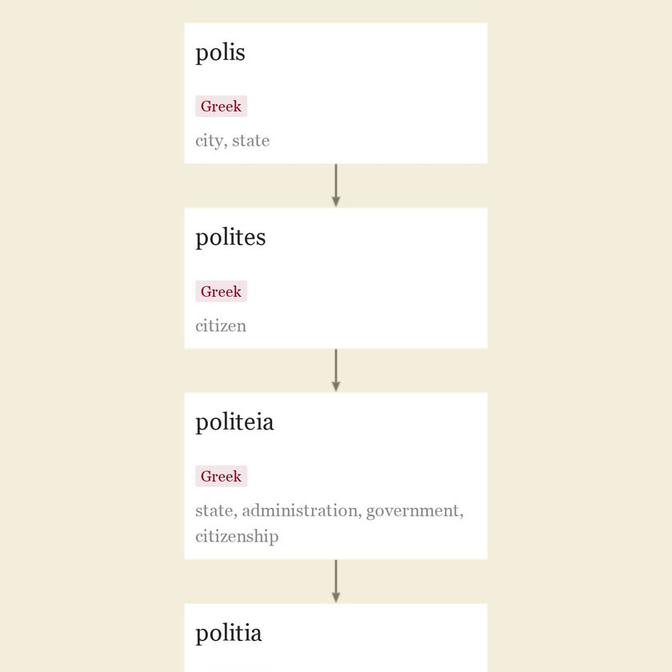 "separated by force into parts, not integral or entire," past-participle adjective from Old English brocken, past participle of break (v.). Of terrain, "rough," 1590s; of language, "imperfect, ungrammatical," 1590s. Related: Brokenly; brokenness. Broken home, one in which the parents of children no longer live together, is from 1846. Broken record in reference to someone continually repeating the same thing is from 1944, in reference to scratches on phonograph disks that cause the needle to jump back and repeat.

When Britain's Minister of State, Selwyn Lloyd[,] became bored with a speech by Russia's Andrei Vishinsky in UN debate, he borrowed a Dizzy Gillespie bebop expression and commented: "Dig that broken record." While most translators pondered the meaning, a man who takes English and puts it into Chinese gave this translation: "Recover the phonograph record which you have discarded." [Jet, Oct. 15, 1953]