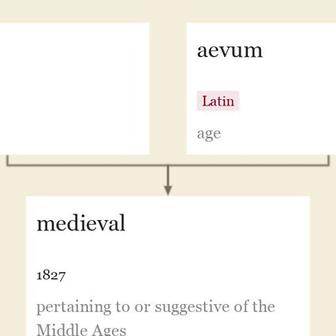 in music, "third note of the diatonic scale" (the one which determines whether the scale is major or minor), 1753, from Italian mediante, from Late Latin mediantem (nominative medians) "dividing in the middle," present participle of mediare "to be in the middle," from Latin medius "middle" (from PIE root *medhyo- "middle"). So called from being midway between the tonic and the dominant.

"occupying a middle or intermediate place;" mid-14c., of persons, "of middle rank" (but this is possibly from, or mixed with, mean (adj.1)); from Anglo-French meines (plural), Old French meien, variant of moiien "mid-, medium, common, middle-class" (12c., Modern French moyen), from Late Latin medianus "of the middle," from Latin medius "in the middle" (from PIE root *medhyo- "middle").

By late Middle English probably felt as a prefix only, and now surviving in English only as a prefix (mid-air, midstream, etc.). Prefixed to months, seasons, etc. from late Old English. As a preposition, "in the middle of, amid" (c. 1400) it is from in midde or a shortened form of amid (compare midshipman) and sometimes is written 'mid.

1540s, "a median part," originally anatomical, from Latin medianus "of the middle" (see median (adj.)). Statistical meaning "middle number of a series" is from 1883.

1711, "a low story between two higher ones in a building," from French mezzanine (17c.), from Italian mezzanino, from mezzano "middle," from Latin medianus "of the middle," from medius (from PIE root *medhyo- "middle"). Sense of "lowest balcony in a theater" recorded by 1913.