1560s, "the carrying out or following up of anything" (also literal, "action of pursuing, a following after," but this is obsolete), from French prosecution (late 13c.) and directly from Late Latin prosecutionem (nominative prosecutio) "a following," noun of action from past-participle stem of prosequi "to follow after; chase, pursue; attack, assail" (see prosecute). The meaning "legal action, the institution and carrying out of a suit at law" is from 1630s. Hence, transferred, "the party by whom legal proceedings are initiated" (1891).

1879, "instrument for stamping by hand with ink, having letters or numbers cast in vulcanized rubber," from rubber (n.1) + stamp (n.). The figurative sense of "thing or institution whose power is formal but not real" is by 1901 (on the notion of rubber-stamping "approved" or some such thing on everything given to it by the real powers). The verb is by 1889; in the figurative sense by 1912. As an adjective by 1931. Related: Rubber-stamped; rubber-stamping.

mid-15c., "belonging exclusively to one person," also "special, particular," from Old French peculiaire and directly from Latin peculiaris "of one's own (property)," from peculium "private property," literally "property in cattle" (in ancient times the most important form of property), from pecu "cattle, flock," related to pecus "cattle" (see pecuniary).

early 15c., earlier asile (late 14c.), "place of refuge, sanctuary," from Latin asylum "sanctuary," from Greek asylon "refuge, fenced territory," noun use of neuter of asylos "inviolable, safe from violence," especially of persons seeking protection, from a- "without" (see a- (3)) + sylē "right of seizure," which is of unknown etymology.

Literally, "an inviolable place." Formerly a place where criminals and debtors sought shelter from justice and from which they could not be taken without sacrilege. General sense of "safe or secure place" is from 1640s; abstract sense "inviolable shelter, protection from pursuit or arrest" is from 1712. Meaning "benevolent institution to shelter some class of persons suffering social, mental, or bodily defects" is from 1773, originally of female orphans.

As an adjective from c. 1300. Summer camp as an institution for youth is attested from 1886; summer resort is from 1823; summer school first recorded 1810; theatrical summer stock is attested from 1941 (see stock (n.2)). Old Norse sumarsdag, first day of summer, was the Thursday that fell between April 9 and 15.

1560s, "a preservative," from noun use of conservatory (adj.) "having the quality of preserving," from Latin conservator "keeper, preserver, defender," agent noun from conservare. Meaning "a place for preserving or carefully keeping anything" is from 1610s, from Latin stem of conservation + -ory. From 1660s as "greenhouse."

Meaning "school of music, for performing arts" is recorded from 1805, from Italian conservatorio or French conservatoire, a place of public instruction and training in some branch of science or the arts, especially music, from Medieval Latin conservatorium. Originally an Italian institution, "hospital for foundlings in which musical education was given;" it was picked up by the French after the Revolution. The Italian word is attested in English from 1771. 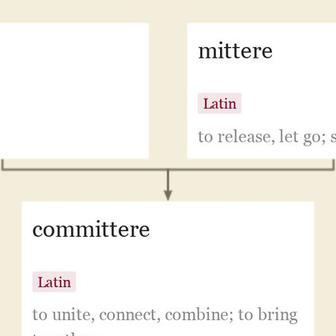 late 14c., "to give in charge, entrust," from Latin committere "to unite, connect, combine; to bring together," from com "with, together" (see com-) + mittere "to release, let go; send, throw" (see mission).

The evolution of the modern range of meanings in English is not entirely clear. Sense of "to perpetrate (a crime), do, perform (especially something reprehensible)" was ancient in Latin; in English it is attested from mid-15c. Meaning "consign (someone) to custody (of prison, a mental institution, etc.) by official warrant" is from early 15c.

From 1530s as "trust (oneself) completely to;" from 1770 as "put or bring into danger by an irrevocable preliminary act." The intransitive use (in place of commit oneself) first recorded 1982, probably influenced by existentialism use (1948) of commitment to translate Sartre's engagement "emotional and moral engagement."