It is the hypothetical source of/evidence for its existence is provided by: Greek temnein "to cut," tomos "volume, section of a book," originally "a section, piece cut off;" Old Church Slavonic tina "to cleave, split;" Middle Irish tamnaim "I cut off," Welsh tam "morsel."
Related entries & more
Advertisement
flint (n.)

This is a low word, scarcely ever used but in burlesque or conversation; and applied to any thing a man likes, without a settled meaning. [Johnson, 1755]

The meaning has narrowed since, but clever also often in old use and dialect meant "well-shaped, attractive-looking" and in late 18c. and 19c. American English sometimes "good-natured, agreeable." Related: Cleverly; cleverness.

Related entries & more
key (n.1)
"instrument for opening locks," Middle English keie, from Old English cæg "metal piece that works a lock, key" literal and figurative ("solution, explanation, one who or that which opens the way or explains"), a word of unknown origin, abnormal evolution, and no sure cognates other than Old Frisian kei.

Perhaps it is related to Middle Low German keie "lance, spear" on notion of "tool to cleave with," from Proto-Germanic *ki- "to cleave, split" (cognates: German Keil "wedge," Gothic us-kijans "come forth," said of seed sprouts, keinan "to germinate"). But Liberman writes, "The original meaning of *kaig-jo- was presumably '*pin with a twisted end.' Words with the root *kai- followed by a consonant meaning 'crooked, bent; twisted' are common only in the North Germanic languages." Compare also Sanskrit kuncika- "key," from kunc- "make crooked."

Modern pronunciation is a northern variant predominating from c. 1700; earlier and in Middle English it often was pronounced "kay." Meaning "that which holds together other parts" is from 1520s. Meaning "explanation of a solution" (to a set problem, code, etc.) is from c.1600.

The musical sense originally was "tone, note" (mid-15c.). In music theory, the sense developed 17c. to "sum of the melodic and harmonic relationships in the tones of a scale," also "melodic and harmonic relationships centering on a given tone." Probably this is based on a translation of Latin clavis "key," used by Guido for "lowest tone of a scale," or French clef (see clef; also see keynote). Sense of "mechanism on a musical instrument operated by the player's fingers" is from c. 1500, probably also suggested by uses of clavis. OED says this use "appears to be confined to Eng[lish]." First of organs and pianos, by 1765 of wind instruments; transferred to telegraphy by 1837 and later to typewriters (1876).
Related entries & more
divide (v.)

early 14c., "separate into parts or pieces," from Latin dividere "to force apart, cleave, distribute," from assimilated form of dis- "apart" (see dis-) + -videre "to separate," which, according to de Vaan, is from PIE *(d)uid- "to separate, distinguish" (source also of Sanskrit avidhat "allotted," Old Avestan vida- "to devote oneself to"). He writes: "The original PIE verb ... (which became thematic in Latin) meant 'to divide in two, separate'. It lost initial *d- through dissimilation in front of the next dental stop, and was reinforced by dis- in Latin ...." Also compare devise.

It is attested from late 14c. as "sever the union or connection with," also "disunite, cause to disagree in opinion." Intransitive sense of "become separated into parts" is from 1520s. Mathematical sense "perform the operation of division" is from early 15c. Divide and rule (c. 1600) translates Latin divide et impera, a maxim of Machiavelli. Related: Divided; dividing.

"Scientology" is a new word which names a new science. It is formed from the Latin word, "scio", which means KNOW, or DISTINGUISH, being related to the word "scindo", which means CLEAVE. (Thus, the idea of differentiation is strongly implied.) It is formed from the Greek word "logos", which means THE WORD or OUTWARD FORM BY WHICH THE INWARD THOUGHT IS EXPRESSED AND MADE KNOWN: also, THE INWARD THOUGHT or REASON ITSELF. Thus, SCIENTOLOGY means KNOWING ABOUT KNOWING, or SCIENCE OF KNOWLEDGE.

The elements of it are Latin scire "to know" (for which see science) and Greek logos "word, speech, statement, discourse," also "computation, account," also "reason," from PIE *log-o-, suffixed form of root *leg- (1) "to collect, gather," with derivatives meaning "to speak," on notion of "to pick out words." There was a German scientologie (A. Nordenholz, 1937). Related: Scientologist.

Especially slips of paper attached to a document as an appendix, stating details in a tabular form or listing names or particulars (a sense maintained in U.S. tax forms). The specific meaning "printed timetable" is recorded by 1863 in railway use. The modern spelling began 15c. in imitation of Latin, was regular from mid-17c., but pronunciation remained "sed-yul" for centuries afterward. The modern British pronunciation ("shed-yul") is from French influence, while the U.S. pronunciation ("sked-yul") is from the practice of Webster, based on the Greek original.

Sense of "let (liquid) fall or run out" developed mid-14c. from use of the word in reference to shedding blood (early 14c.). Intransitive sense "to run out and become wasted" is from 1650s. Spill the beans recorded by 1910 in a sense of "spoil the situation;" 1919 as "reveal a secret." To cry for spilt milk (usually with negative) is attested from 1738. Related: Spilled; spilt; spilling. 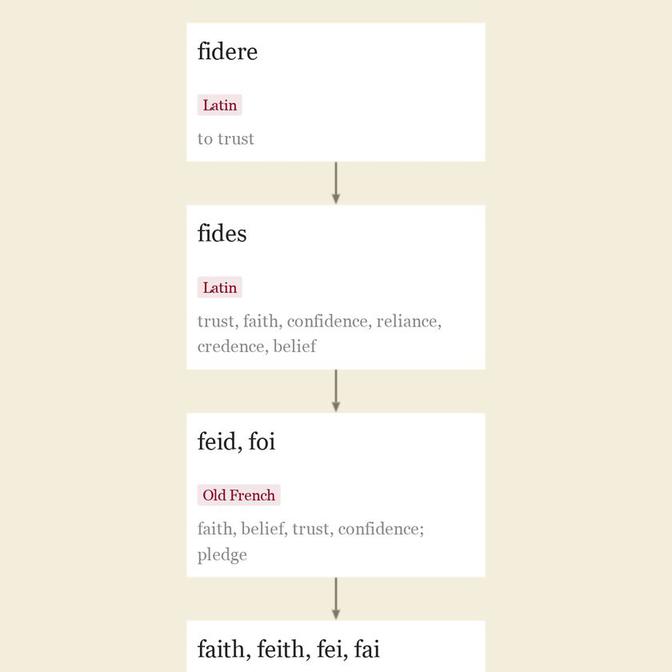 From early 14c. as "assent of the mind to the truth of a statement for which there is incomplete evidence," especially "belief in religious matters" (matched with hope and charity). Since mid-14c. in reference to the Christian church or religion; from late 14c. in reference to any religious persuasion.

And faith is neither the submission of the reason, nor is it the acceptance, simply and absolutely upon testimony, of what reason cannot reach. Faith is: the being able to cleave to a power of goodness appealing to our higher and real self, not to our lower and apparent self. [Matthew Arnold, "Literature & Dogma," 1873]

From late 14c. as "confidence in a person or thing with reference to truthfulness or reliability," also "fidelity of one spouse to another." Also in Middle English "a sworn oath," hence its frequent use in Middle English oaths and asseverations (par ma fay, mid-13c.; bi my fay, c. 1300).