early 15c., "to break off in small pieces" (intransitive, of stone); from Old English forcippian "to pare away by cutting, cut off," verbal form of cipp "small piece of wood" (see chip (n.1)).

Transitive meaning "to cut up, cut or trim into small pieces, diminish by cutting away a little at a time" is from late 15c. Sense of "break off fragments" is 18c. Related: Chipped; chipping. To chip in "contribute" (1861) is American English, perhaps from card-playing; but compare chop in "interrupt by remarking" (1540s). Chipped beef attested from 1826.

1610s, Hamburger "native of Hamburg." Also used of ships from Hamburg. From 1838 as a type of excellent black grape indigenous to Tyrolia; 1857 as a variety of hen.

The meat product was so called by 1880 (as hamburg steak); if it was named for the German city no certain connection has ever been put forth, and there may not be one unless it be that Hamburg was a major port of departure for German immigrants to United States. An 1809 account of life and manners in Iceland says meat smoked in the chimney there is referred to as Hamburg beef.

The meaning "a sandwich consisting of a bun and a patty of grilled hamburger meat" attested by 1909, short for hamburger sandwich (1902). Shortened form burger is attested from 1939; beefburger was attempted 1940, in an attempt to make the main ingredient more explicit, after the -burger had taken on a life of its own as a suffix (compare cheeseburger, attested by 1938).

indicating where something or someone is knocked, "into an extremely distressed or disabled condition," American English slang, by 1835; considered by OED to be a corruption of western England dialectal collyweston, name of a village in Northamptonshire ("Colin's West Farmstead") that somehow came to signify "askew, not right." But Farmer calls it an Americanism and goes in for it as an "indefinite superlative," and DAS also does not consider the obscure English term to be the source. Early nautical references suggest it might simply be what it looks like: a sailor's generic way of indicating something has been thrown pretty far by impact, based on galley in the "ship's cooking room" sense.

"Matter? why d--n my old shoes, Captain Williams, here is one of that bloody Don Dego's shot gone right through the galley-door, and through the side of the big copper, and knocked all the beef and hot water galley-west. ..." [N.Ames, "Old Sailor's Yarns," New York, 1835]

English spelling with sir- dates from 1620s, by folk-etymology supposed to be because the cut of beef was "knighted" by an English king for its superiority, a tale variously told of Henry VIII, James I, and Charles II. The story dates to 1655.

The word surloin or sirloin is often said to be derived from the fact that the loin was knighted as Sir Loin by Charles II, or (according to [early 19c. English dictionary writer Charles] Richardson) by James I. Chronology makes short work of this statement; the word being in use long before James I was born. It is one of those unscrupulous inventions with which English 'etymology' abounds, and which many people admire because they are 'so clever.' The number of those who literally prefer a story about a word to a more prosaic account of it, is only too large. [Walter W. Skeat, "An Etymological Dictionary of the English Language," 1882]

early 14c., "a spherical body; that which has roundness," from round (adj.) and Anglo-French rount and Old French reont, roond. Compare Dutch rond, Danish and Swedish rund, German runde, all nouns from adjectives.

Meaning "quantity of liquor served to a company at one time" is from 1630s; that of "single bout in a fight or boxing match" is from 1812; "single discharge of a firearm" is from 1725. Sense of "recurring session of meetings or negotiations" is from 1964. Theatrical sense (in phrase in the round) in reference to a stage surrounded by the audience is recorded from 1944.  To make the rounds "be passed along by a whole set of persons" is by 1967; the earlier form was go the round (1660s).

Meaning "small country residence or detached suburban house" (without suggestion of poverty or tenancy) is from 1765. Modern French cottage is a 19c. reborrowing from English. Cottage industry, one that can be done at home, is attested from 1854. Cottage cheese, the U.S. name for a kind of soft, white cheese, is attested from 1831, earliest in reference to Philadelphia:

There was a plate of rye-bread, and a plate of wheat, and a basket of crackers; another plate with half a dozen paltry cakes that looked as if they had been bought under the old Court House; some morsels of dried beef on two little tea-cup plates: and a small glass dish of that preparation of curds, which in vulgar language is called smear-case, but whose nom de guerre is cottage-cheese, at least that was the appellation given it by our hostess. ["Miss Leslie," "Country Lodgings," Godey's Lady's Book, July 1831] 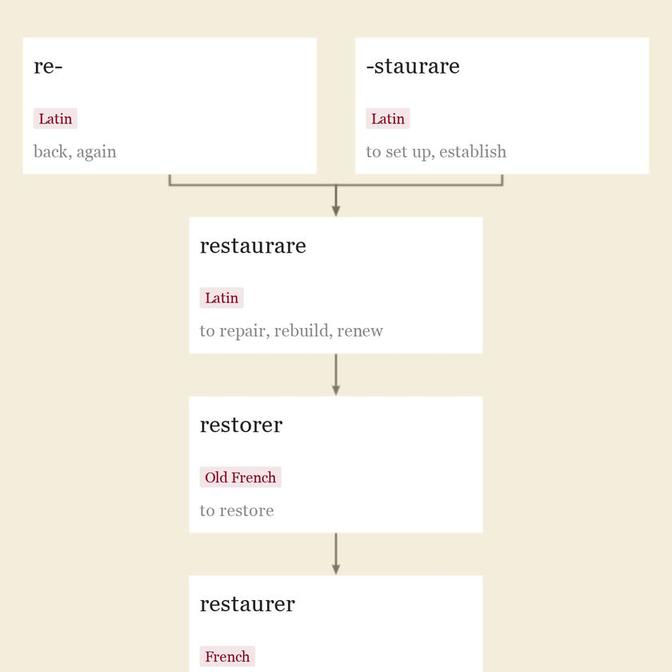 "an eating-house, establishment where meals may be bought and eaten," 1821, from French restaurant "a restaurant," originally "food that restores," noun use of present participle of restaurer "to restore or refresh," from Old French restorer (see restore).

In 1765 a man by the name of Boulanger, also known as "Champ d'Oiseaux" or "Chantoiseau," opened a shop near the Louvre (on either the rue des Poulies or the rue Bailleul, depending on which authority one chooses to believe). There he sold what he called restaurants or bouillons restaurants—that is, meat-based consommés intended to "restore" a person's strength. Ever since the Middle Ages the word restaurant had been used to describe any of a variety of rich bouillons made with chicken, beef, roots of one sort or another, onions, herbs, and, according to some recipes, spices, crystallized sugar, toasted bread, barley, butter, and even exotic ingredients such as dried rose petals, Damascus grapes, and amber. In order to entice customers into his shop, Boulanger had inscribed on his window a line from the Gospels: "Venite ad me omnes qui stomacho laboratis et ego vos restaurabo." He was not content simply to serve bouillon, however. He also served leg of lamb in white sauce, thereby infringing the monopoly of the caterers' guild. The guild filed suit, which to everyone's astonishment ended in a judgment in favor of Boulanger. [Jean-Robert Pitte, "The Rise of the Restaurant," in "Food: A Culinary History from Antiquity to the Present," English editor Albert Sonnenfeld, transl. Clarissa Botsford, 1999, Columbia University Press]

Italian spelling ristorante attested in English by 1925. Middle English had similar words in legal language, such as restaurance "restitution." The railroad restaurant car (1872) was one adapted to afford meals to passengers while travelling.

1921, in U.S. humorist Frederick J. Allen's piece "The Goon and His Style" (Harper's Monthly Magazine, December 1921), which defines it as "a person with a heavy touch," one who lacks "a playful mind;" perhaps a made-up word, or from gony "simpleton" (1580s), which was applied by sailors to the albatross and similar big, clumsy birds. Goons were contrasted with jiggers, and the columns about them had some currency in U.S. newspapers c. 1921-25.

A goon is a person with a heavy touch as distinguished from a jigger, who has a light touch. ... Most Germans are goons; most French jiggers. ["A 'Goon' and His Style," in Lincoln State Journal, Dec. 9, 1921]

The word turns up in various places early 20c.: As a mythical monster in a children's serialized story in the U.S. from 1904, as the name of a professional wrestler in North Carolina in 1935. The goons were characters in the "Thimble Theater" comic strip (starring Popeye) by U.S. cartoonist E.C. Segar (1894-1938); they appeared in Segar's strips from mid-1930s and, though they reportedly gave children nightmares, enjoyed a burst of popularity when they appeared in animated cartoons in 1938.

The most famous was Alice the Goon, slow-witted and muscular (but gentle-natured) character who began as the Sea Hag's assistant. Segar might have got the word directly from sailors' jargon.

Later 20c. senses of the word all probably stem from this: Sense of "hired thug" is first recorded 1938 (in reference to union "beef squads" used to cow strikers in the Pacific Northwest). She also was the inspiration for British comedian Spike Milligan's "The Goon Show." Also used among American and British POWs in World War II in reference to their German guards. What are now "juvenile delinquents" were in the 1940s sometimes called goonlets.