also pip-squeak, contemptuous name for an insignificant person, 1910, from the trivial noise a young or weak creature makes. In World War I it was the soldier's slang name for a small German shell "which makes both a pip and a squeak when it comes over the trenches" [Farrow, "Dictionary of Military Terms," 1918]. Pip and Squeak (and later Wilfred), the beloved English comic strip animals, debuted May 1919 in the children's section of the Daily Mirror. To squeeze (something) until the pips squeak "exact the maximum from" is attested by 1918, from pip (n.1).

The grossest spectacle was provided by Sir Eric Geddes in the Guildhall at Cambridge. An earlier speech in which, in a moment of injudicious candour, he had cast doubts on the possibility of extracting from Germany the whole cost of the war had been the object of serious suspicion, and he had therefore a reputation to regain. "We will get out of her all you can squeeze out of a lemon and a bit more," the penitent shouted, "I will squeeze her until you can hear the pips squeak" ; his policy was to take every bit of property belonging to Germans in neutral and Allied countries, and all her gold and silver and her jewels, and the contents of her picture-galleries and libraries, to sell the proceeds for the Allies' benefit. [John Maynard Keynes, "The Economic Consequences of Peace," 1919]

1610s, "to thrust forward or onward, to drive along;" 1640s, "to cause to stick out," from Latin protrudere "thrust forward; push out," from pro "forward" (see pro-) + trudere "to thrust, push" (from PIE *treud- "to press, push, squeeze;" see threat). Intransitive meaning "jut out, bulge forth" recorded from 1620s. Related: Protruded; protruding. 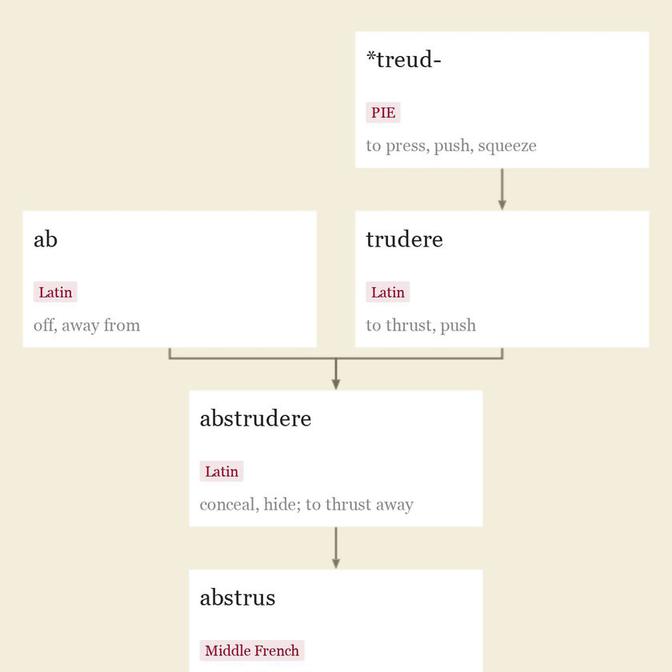 1590s, "remote from comprehension," from French abstrus (16c.) or directly from Latin abstrusus "hidden, concealed, secret," past participle of abstrudere "conceal, hide," literally "to thrust away," from assimilated form of ab "off, away from" (see ab-) + trudere "to thrust, push," from PIE root *treud- "to press, push, squeeze" (see threat). Related: Abstrusely; abstruseness.

1550s, "thrust forward forcibly or unduly" (trans.), from Latin obtrudere "to thrust into, press upon," from ob "in front of; toward" (see ob-) + trudere "to thrust," "to thrust, push," from PIE *treud- "to press, push, squeeze" (see threat). Intransitive sense of "be or become obtrusive, intrude, force oneself" is by 1570s. Related: Obtruded; obtruding.

late 14c., "to press or pack (something) together, force or drive into a smaller compass," from Old French compresser "compress, put under pressure," from Late Latin compressus, past participle of  compressare "to press together," frequentative of comprimere "to squeeze," from com "with, together" (see com-) + premere "to press, hold fast, cover, crowd, compress" (from PIE root *per- (4) "to strike"). Related: Compressed; compressing. Compressed air is attested from 1660s.