also egg-plant, plant cultivated for its large oblong or ovate fruit, which is highly esteemed as a vegetable, 1763, from egg (n.) + plant (n.). Originally of the white variety. Compare aubergine.

"hot, dry desert wind" in the Arabian peninsula and elsewhere in that region, 1790, from Arabic samum "a sultry wind," literally "poisonous," from samma "he poisoned," from sam "poison."

"full of venom, noxious or hurtful by means of venom," c. 1300, from Anglo-French venimeus, Old French venimos (12c., Modern French venimeux), from venim (see venom). Earliest recorded use is figurative; literal sense by early 14c. Biologists have tended to preserve a distinction between venomous and poisonous that the general language has forgotten: venomous is applied to what bites or stings to inject toxins, poisonous to what unload toxins when eaten. Related: Venomously; venomousness.

1905, of substances, "action of depriving of poisonous qualities;" 1971, "removal of addictive substances from the body," originally in reference to habitual heavy drinkers of alcohol; see detoxify + noun ending -ation. As a type of alternative health treatment, by 1997.

"magic," 1920s, probably of Creole origin; compare Gullah moco "witchcraft," Fula moco'o "medicine man." It was noted in 1935 as an underworld name for "any of the poisonous, habit-forming narcotics." 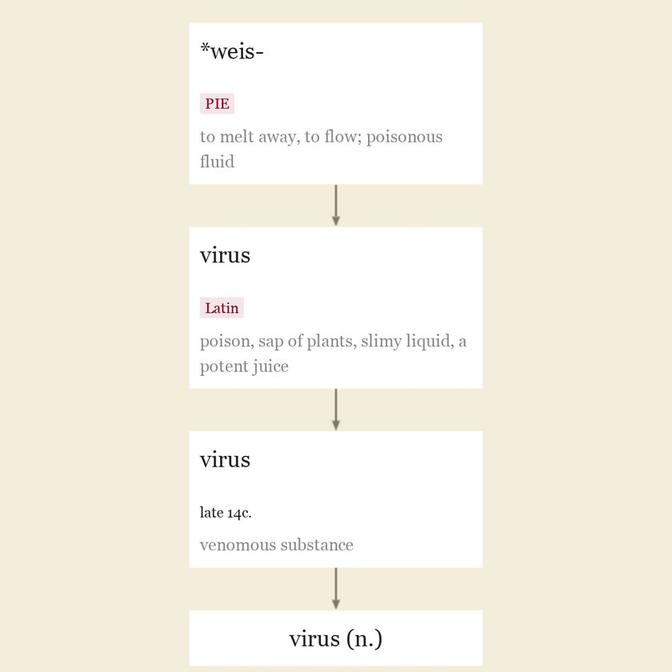 The meaning "agent that causes infectious disease" emerged by 1790s gradually out of the earlier use in reference to venereal disease (by 1728); the modern scientific use dates to the 1880s. The computer sense is from 1972.

VIRUS (among Physicians) a kind of watery stinking Matter, which issues out of Ulcers, being endued with eating and malignant Qualities. [Bailey's dictionary, 1770]

1540s, "to plant in" (abstractly, of ideas, emotions, etc.), from French implanter "to insert, engraft" (alongside Old French emplanter "to plant"), literally "plant in," from assimilated form of in- "into, in, on, upon" (from PIE root *en "in") + planter "to plant" (see plant (n.)). Meaning "surgically implant (something) in the body" is from 1886, originally of teeth. Implanted is attested earlier, from early 15c., probably based on Medieval Latin implantus. Related: Implanting.