1650s, "action or fact of containing," from contain + -ment. As the word for an international policy of the West against the Soviet Union, it is recorded from 1947, associated with U.S. diplomat George F. Kennan, who in a "Foreign Affairs" article that year advising a policy of "a long-term, patient but firm and vigilant containment of Russian expansive tendencies."

c. 1300, sorgien, cirurgian "person who heals by manual operation on the patient," from Anglo-French surgien (13c.), from Old French surgien, cirurgien (13c.), from cirurgie "surgery," from Latin chirurgia "surgery," from Greek kheirourgia, from kheirourgos "working or done by hand," from kheir "hand" (from PIE root *ghes- "the hand") + ergon "work" (from PIE root *werg- "to do").

Biblical masc. proper name, name of an ancient patriarch whose story forms a book of the Old Testament, from Hebrew Iyyobh, which according to some scholars is literally "hated, persecuted," from ayyabh "he was hostile to," related to ebhah "enmity." Others say it means "the penitent one." Figurative of bad news, destitution, and patient endurance. Hence Job's comforter, of one who brings news of additional misfortune (1736).

1727, a physician's term for "condition of feeling healthy and comfortable (especially when sick)," medical Latin, from Greek euphoria "power of enduring easily," from euphoros, literally "bearing well," from eu "well" (see eu-) + pherein "to carry," from PIE root *bher- (1) "to carry." Non-technical use, now the main one, dates to 1882 and perhaps is a reintroduction. Earlier the word meant "effective operation of a medicine on a patient" (1680s).

early 13c., name given to the rite of Vespers of the Office of the Dead, so called from the opening of the first antiphon, "I will please the Lord in the land of the living" (Psalms cxvi.9, in Vulgate Placebo Domino in regione vivorum), from Latin placebo "I shall please," future indicative of placere "to please" (see please).

Medical sense is recorded by 1785, "a medicine given more to please than to benefit the patient." Placebo effect is attested from 1900. 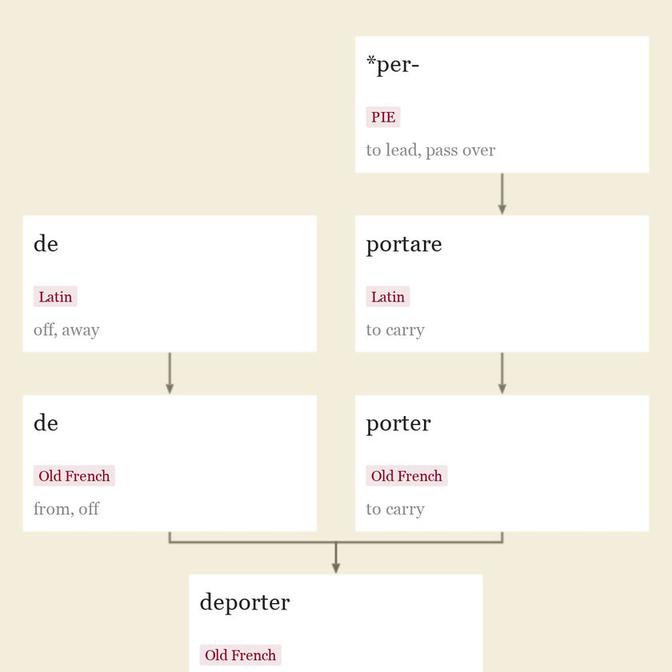 late 15c., "to behave," from Old French deporter "behave, deport (oneself)" (12c.), which also had a wide range of secondary meanings, such as "be patient; take one's (sexual) pleasure with; amuse, entertain; remain, delay, tarry; cheer, console, treat kindly; put aside, cast off, send away," from de "from, off" (see de-) + porter "to carry," from Latin portare "to carry," from PIE root *per- (2) "to lead, pass over." Related: Deported; deporting.

early 15c., "in, of, or pertaining to the mind; characteristic of the intellect," from Late Latin mentalis "of the mind," from Latin mens (genitive mentis) "mind," from PIE root *men- (1) "to think."

1801, "worship of fetishes," from fetish + -ism. Expanded in use by Comte taking it to denote a general type of primitive religion (animism). In the purely psycho-sexual sense, first recorded 1897 in writings of Henry Havelock Ellis (1859-1939).

In certain perversions of the sexual instinct, the person, part of the body, or particular object belonging to the person by whom the impulse is excited, is called the fetish of the patient. [E. Morselli in "Baldwin Dictionary of Philosophy," 1901]

c. 1600, "to be in effect, perform or be at work, exert force or influence," a back-formation from operation (q.v.), or else from Latin operatus, past participle of operari "to work, labor, toil, take pains" (in Late Latin "to have effect, be active, cause"). The surgical sense of "perform some manual act upon the body of a patient," usually with instruments, is attested from 1799. Meaning "to work machinery" is from 1864 in American English. Related: Operated; operating. Operating system in the computer sense is from 1961.

As a psychological disorder, technically bulemia nervosa. Englished form boulimy, bulimy was used from late 14c. in a medical sense of "morbidly ravishing hunger, disease causing the patient to have an insatiable hunger for food."