style of women's dress imitating Alpine peasant costume, with bodice and full skirt, 1937 (from 1921 as a German word in articles on German fashion), from German dialectal diminutive of dirne "girl" (in dirndlkleid "peasant dress"), from a diminutive of Middle High German dierne "maid," from Old High German thiorna, which is related to Old English þegn (see thane).

Related entries & more
soubrette (n.)
1753, theatrical jargon word for lady's maid characters in plays and operas, who typically were pert, flirtatious, and intriguing, from French soubrette, from Provençal soubreto "affected, conceited," fem. of soubret "coy, reserved," from soubra "to set aside," originally "to exceed," from Old Provençal sobrar, from Latin superare "to rise above, overcome," from super "over, above, beyond" (from PIE root *uper "over").
Related entries & more
dey (n.1)

Old English dæge "female servant, woman who handles food in a household, housekeeper," from Proto-Germanic *daigjon (source also of Old Norse deigja "maid, female servant," Swedish deja "dairymaid"), from PIE root *dheigh- "to form, build." Now obsolete (though OED says, "Still in living use in parts of Scotland"), it forms the first element of dairy and the second of lady.

OED says the ground sense of the ancient word seems to be "kneader, maker of bread;" it would have then advanced via Old Norse deigja and Middle English daie to mean "female servant, woman employed in a house or on a farm." By c. 1200 it had acquired the specific sense of "woman in charge of milking and making butter and cheese, dairy-maid." Dæge as "servant" is the second element in many surnames ending in -day (such as Faraday, and perhaps Doubleday, if it means "servant of the Twin," etc.). 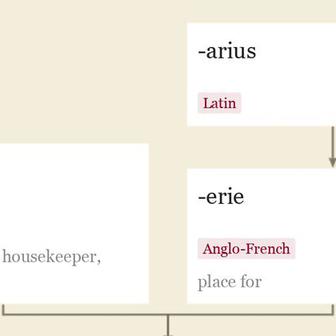 late 15c., mappe "bundle of coarse yarn, cloth, etc., fastened to the end of a stick for cleaning or spreading pitch on a ship's decks," perhaps from Walloon (French) mappe "napkin," from Latin mappa "napkin" (see map (n.)). Modern spelling by 1660s. General sense, of such an implement for cleaning floors, windows, etc., is from 1610s. Of smaller utensils of the same sort used for cleaning dishes, etc., by 1869. Of anything having the shape or appearance of a mop (especially hair), by 1847. Grose ["Dictionary of the Vulgar Tongue," 1788] has mopsqueezer "A maid servant, particularly a housemaid."

Formerly often abbreviated to M' and followed by a capital letter, or spelled out Mac and then rarely used with a capital; as, M'Donald, Macdonald, McDonald.

early 13c., damisele, "young, unmarried woman," especially a maiden of gentle birth, also "maid in waiting, handmaiden assisting a lady," from Anglo-French damaisele and Old French dameisele "woman of noble birth" (Modern French demoiselle "young lady"), modified (by association with dame) from earlier donsele, from Gallo-Roman *domnicella, diminutive of Latin domina "lady" (see dame). Archaic until revived by romantic poets, along with 16c.-17c. variant form damozel (which was used by Spenser). Damsel-fly for "dragon-fly" is by 1815, from a sense in French demoiselle.