Proto-Indo-European root meaning "to rub away, harm." Possibly identical with the root *mer- that means "to die" and forms words referring to death and to beings subject to death.

of a fish, "having shot its spawn," and accordingly of inferior value, early 15c., past-participle adjective from shoot (v.). Applied to persons, with sense of "exhausted by sickness," from 1590s. Also sometimes used of curdled milk.

Go thy ways, old Jack; die when thou wilt, if manhood, good manhood, be not forgot upon the face of the earth, then am I a shotten herring. There live not three good men unhanged in England ; and one of them is fat, and grows old. God help the while! a bad world, I say. [Falstaff, in "1 Henry IV"]

Outlive, Survive. Outlive is generally the stronger, carrying something of the idea of surpassing or beating another in vitality or hold upon life; it is tenderer to say that one survives than that he outlives his wife or friend. [Century Dictionary, 1895]

"article of food," early 14c., from Anglo-French viaunde, Old French viande "food (vegetable as well as animal), victuals, provisions" (11c.), a dissimilation of Vulgar Latin *vivanda, from Late Latin vivenda "things for living, things to be lived upon," in classical Latin, "be live," neuter plural gerundive of vivere "to live" (from PIE root *gwei- "to live"). The French word later was restricted to fresh meat. 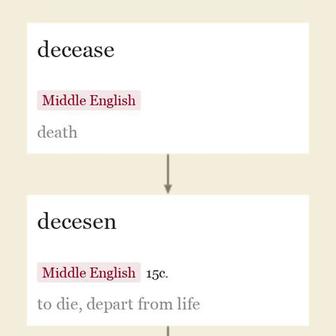