early 15c., "ability to contain; size, extent;" also "ability" in a legal, moral, or intellectual sense, from Old French capacité "ability to hold" (15c.), from Latin capacitatem (nominative capacitas) "breadth, capacity, capability of holding much," noun of state from capax (genitive capacis) "able to hold much," from capere "to take" (from PIE root *kap- "to grasp").

Sense of "power to store electricity" is from 1777; industrial sense of "ability to produce" is from 1931. Meaning "power of containing a certain quantity" is from 1885, hence "largest audience a place can hold" (1908).

Related entries & more
Advertisement
juror (n.)
"one who serves on a jury," c. 1300 (late 12c. in Anglo-Latin), from Anglo-French jurour (late 13c.), Old French jureor "character witness, person who swears an oath," from Latin iuratorem (nominative iurator) "swearer, sworn census-clerk," agent noun from iurare "to swear," from ius (genitive iuris) "law" (see jurist). Meaning "one of a group selected to award prizes, etc. at a public exhibition" is from 1851; this particular use seems to have arisen with the great Industrial Exhibition held that year at the Crystal Palace in London.
Related entries & more
technocracy (n.)

1919, coined by W.H. Smyth as a name for a new system of government by technical experts, from techno- + -cracy.

William Henry Smyth, a distinguished engineer of Berkeley, California, wrote at the close of the war a series of thoughtful papers for the New York magazine "Industrial Management", on the subject of "Technocracy". His thesis was the need of a Supreme National Council of Scientists to advise us how best to live, and how most efficiently to realize our individual aspirations and our national purpose. [The Bookman, March 1922]

There is an earlier use from 1895 in reference to the medical profession. 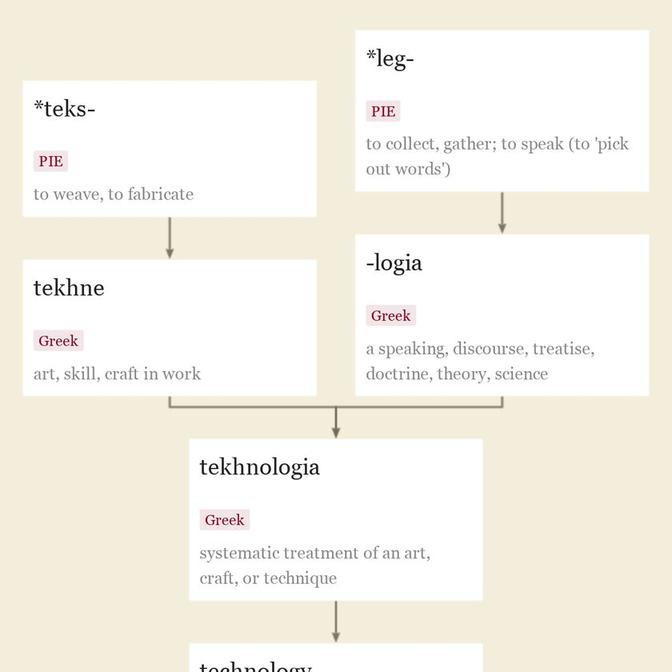 1610s, "a discourse or treatise on an art or the arts," from Greek tekhnologia "systematic treatment of an art, craft, or technique," originally referring to grammar, from tekhno-, combining form of tekhnē "art, skill, craft in work; method, system, an art, a system or method of making or doing," from PIE *teks-na- "craft" (of weaving or fabricating), from suffixed form of root *teks- "to weave," also "to fabricate." For ending, see -logy.

The meaning "study of mechanical and industrial arts" (Century Dictionary, 1895, gives as example "spinning, metal-working, or brewing") is recorded by 1859. High technology attested from 1964; short form high-tech is from 1972.

Related entries & more
air-conditioner (n.)
from air (n.1) + conditioner. Along with air-conditioning first attested 1909, originally an industrial process in textile manufacturing. The word conditioning was applied to the determination of the moisture content of textiles, control of which was essential to spin fine cotton yarns. The original purpose of air-conditioning was to purify air and regulate moisture. In 1906 Stuart W. Cramer of Charlotte, N.C., and Willis H. Carrier of Buffalo, N.Y., independently devised methods of using a fine spray of water to cool air. Self-contained air-conditioning units, complete with refrigeration equipment, were widely used to cool air in U.S. stores, restaurants, etc. from the 1930s. An earlier name for such a device (using ice and fans) was air cooler (1875).
Related entries & more
recession (n.)

1640s, "act of receding, a going back," from French récession "a going backward, a withdrawing," and directly from Latin recessionem (nominative recessio) "a going back," noun of action from past-participle stem of recedere "to go back, fall back; withdraw, depart, retire," from re- "back" (see re-) + cedere "to go" (from PIE root *ked- "to go, yield").

The sense of "temporary decline in economic activity" was a fall-of-1929 coinage, probably a noun of action from recess (v.):

The material prosperity of the United States is too firmly based, in our opinion, for a revival in industrial activity — even if we have to face an immediate recession of some magnitude — to be long delayed. [Economist, Nov. 2, 1929]

Ayto ("20th Century Words") notes, "There was more than a hint of euphemism in the coining of this term."

mid-15c., militari, "pertaining to or befitting soldiers; used, done, or brought about by soldiers," from Old French militaire (14c.) and directly from Latin militaris "of soldiers or war, of military service, warlike," from miles (genitive militis) "soldier," a word of unknown origin.

Perhaps ultimately from Etruscan, or else meaning "one who marches in a troop," and thus connected to Sanskrit melah "assembly," Greek homilos "assembled crowd, throng." De Vaan writes, "It is tempting to connect mīlia [pl.] 'thousand(s)', hence *mīli-it- 'who goes with/by the thousand' ...." Related: Militarily. Old English had militisc, from Latin.

Military police is from 1827. Military age, at which one becomes liable to military service, is by 1737. Military-industrial complex was coined 1961 in the farewell speech of U.S. president Dwight D. Eisenhower.

1839, "cafe," American English, from Mexican Spanish cafeteria "coffee store," from café "coffee" (see coffee) + Spanish -tería "place where something is done" (usually business). Sense shifted by 1890s to "self-service dining establishment." The ending came to be understood popularly as meaning "help-yourself" and was extended to new formation with that sense from c. 1923.

Examples of the thing itself date to 1885, but they seem to have become established first in Chicago in the early 1890s by social and philanthropic organizations (such as the YWCA) to offer working girls affordable, fast, light meals in a congenial atmosphere. Their popularity waned after c. 1926, eclipsed by coffee shops, lunch counters, and sandwich shops. Industrial plants began to add them in 1915; schools and colleges followed.