"to prey, to plunder, devour greedily," mid-14c., also ravine, from Old French raviner, ravinier "to seize, pillage; to sweep down, cascade," from Latin rapina "an act of robbery, plundering," from rapere "seize, carry off, rob" (see rapid). Related: Ravened; ravening. Obsolete except as a past-participle adjective. 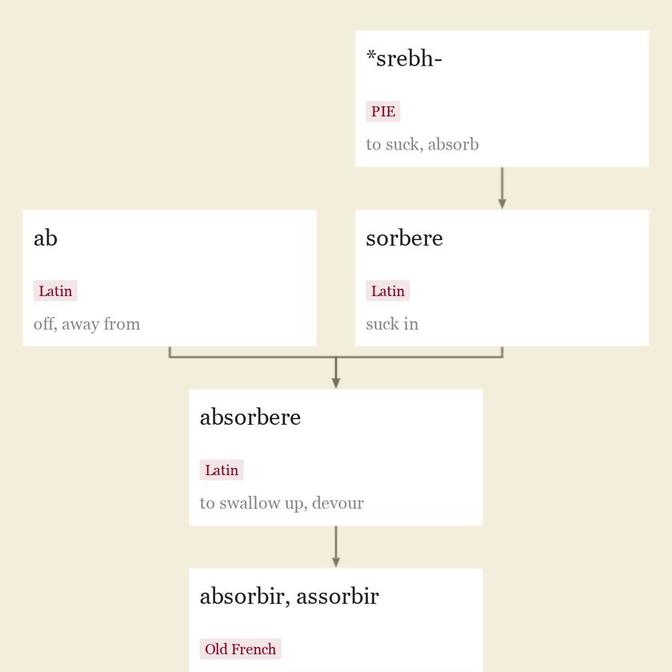 "to drink in, suck up, take in by absorption," early 15c., from Old French absorbir, assorbir (13c., Modern French absorber), from Latin absorbere "to swallow up, devour," from ab "off, away from" (see ab-) + sorbere "suck in," from PIE root *srebh- "to suck, absorb" (source also of Armenian arbi "I drank," Greek rhopheo "to sup greedily up, gulp down," Lithuanian srebiu, srėbti "to drink greedily"). Figurative meaning "to completely grip (one's) attention" is from 1763.

Meaning "happening in a short time, coming quickly into existence" is from 1780. Related: Rapidly; rapidness. Rapid-fire (adj.) 1890 in reference to guns, figurative or transferred use by 1900; the noun phrase is by 1836. Rapid-transit first attested 1852, in reference to street railways; rapid eye movement, associated with a certain phase of sleep, is from 1906.

"exceedingly fat," 1650s, back-formation from obesity and in part from Latin obesus "fat, stout, plump," literally "that has eaten itself fat," past participle of obedere "to eat all over, devour," from ob "about; because of" (see ob-) + edere "eat" (from PIE root *ed- "to eat"). According to OED, "Rare before 19th c." Related: Obeseness. Latin obesus was translated in Old English as oferfæt "overfat." As Latin obesus also could be read as "eaten up," it also was used in a passive sense, "wasted away, lean."

"having power to relieve pain," 1540s, from Medieval Latin anodynus "pain-removing, allaying pain," from Latin anodynus "painless," from Greek anodynos "free from pain," from an- "without" (see an- (1)) + odynē "pain, torment" (of the body or mind), a word of uncertain origin, evidently Indo-European, but none of the proposed etymologies satisfies Beekes. Some suggest it is a suffixed form of PIE root *ed- "to eat" (compare Lithuanian ėdžioti "to devour, bite," ėdžiotis "to suffer pain").

As a noun, "substance which alleviates pain," 1540s; in old slang, frequently a euphemism for "death" (as the final relief from the mental pain or distress of life) as in anodyne necklace "hangman's noose." Related: Anodynous.

"eat hastily," 1960, U.S. teen slang, originally a noun meaning "food, meal" (1932), perhaps imitative, or from nautical slang scoff "eat hastily or voraciously, devour" which is attested from 1846 (compare U.S. tramps slang scoffing "food, something to eat," 1907). This is said to be a variant of scaff (by 1797) in the same sense, and scaff (n.) "food, provisions" is attested from 1768, but the group is of obscure origin. Perhaps the word comes ultimately from some survival of Old English sceorfan "to gnaw, bite" (see scarf (n.2)). South African scoff (n.) is said to be a colloquial representation of Dutch schoft "quarter of a day," hence "each of the meals of a day." Related: Scarfed; scarfing.