"breach of faith or trust, base treachery," 1590s, from French perfidie (16c.), from Latin perfidia "faithlessness, falsehood, treachery," from perfidus "faithless," from phrase per fidem decipere "to deceive through trustingness," from per "through" (from PIE root *per- (1) "forward," hence "through") + fidem (nominative fides) "faith" (from PIE root *bheidh- "to trust, confide, persuade").

[C]ombinations of wickedness would overwhelm the world by the advantage which licentious principles afford, did not those who have long practiced perfidy grow faithless to each other. [Samuel Johnson, "Life of Waller"]

Meaning "states or persons united by a league" is from 1620s. In U.S. history, the Articles of Confederation were adopted by Congress in 1777 and ratified by the states over the next four years. They went into effect March 1, 1781, and expired March 4, 1789. 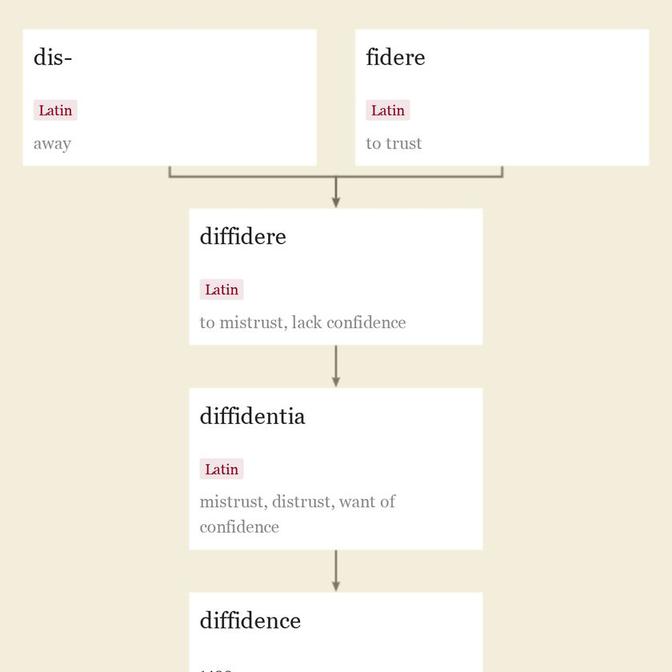 Diffidence is a defect: it is an undue distrust of self, with fear of being censured for failure, tending to unfit one for duty. [Century Dictionary]

1759, "indicating the confiding of a private intimacy," from Latin confidentia (see confidence) + -al (1). Sense of "intended to be treated as private" is from 1773; that of "enjoying the confidence of another" is from 1805. Related: Confidentially.