late Old English hyttan, hittan "come upon, meet with, fall in with, 'hit' upon," from a Scandinavian source such as Old Norse hitta "to light upon, meet with," also "to hit, strike;" Swedish hitta "to find," Danish and Norwegian hitte "to hit, find," from Proto-Germanic *hitjan, which is of uncertain origin. Meaning shifted in late Old English period to "strike, come into forcible contact" via the notion of "to reach with a blow or missile," and the word displaced Old English slean (modern slay) in this sense. Original sense survives in phrases such as hit it off (1780, earlier in same sense hit it, 1630s) and is revived in slang hit on (1970s).

"to touch down," as a bird from flight, "get down or descend," as a person from horseback, from Old English lihtan "to alight; to alleviate, make less heavy," from Proto-Germanic *linkhtijan, literally "to make light," from *lingkhtaz "not heavy" (see light (adj.1)). Apparently the etymological sense is "to dismount" (a horse, etc.), and thus relieve it of one's weight."

Alight has become the more usual word. To light on "happen upon, come upon" is from late 15c. To light out "leave hastily, decamp" is 1866, from a nautical meaning "move out, move heavy objects" (1841), a word of unknown origin but perhaps belonging to this word (compare lighter (n.1)).

Transitive sense of "call together, cause to assemble" is from 1590s. Related: Convened; convener; convening.

Related entries & more
souvenir (n.)
1775, "a remembrance or memory," from French souvenir (12c.), from Old French noun use of souvenir (v.) "to remember, come to mind," from Latin subvenire "come to mind," from sub "up from below" (see sub-) + venire "to come," from a suffixed form of PIE root *gwa- "to go, come." Meaning "token of remembrance, memento" is first recorded 1782.
Related entries & more
Advertisement
accessible (adj.) 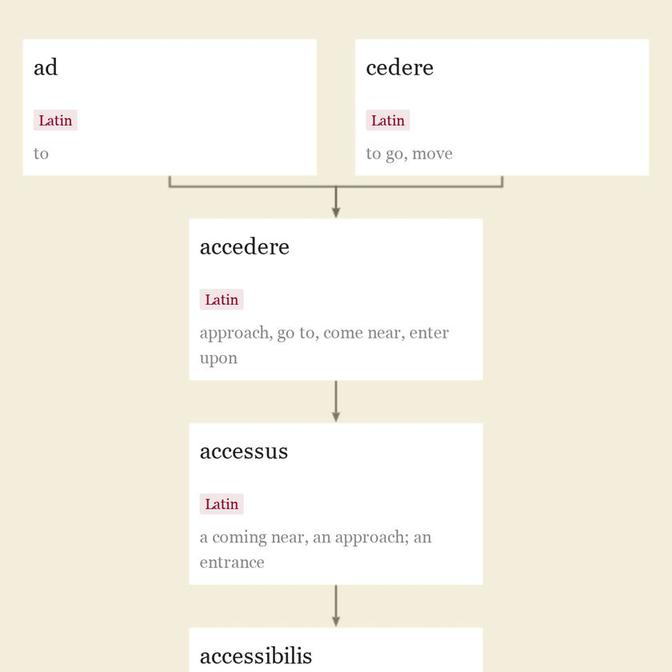 c. 1400, "affording access, capable of being approached or reached," from Old French accessible and directly from Late Latin accessibilis, verbal adjective from Latin accessus "a coming near, an approach; an entrance," from accedere "approach, go to, come near, enter upon" (see accede). The meaning "easy to reach" is from 1640s; of art or writing, "able to be readily understood," by 1961 (a word not needed before writing or art often deliberately was made not so). Related: Accessibility.

late 13c., "come into view," from stem of Old French aparoir, aperer "appear, come to light, come forth" (12c., Modern French apparoir), from Latin apparere "to appear, come in sight, make an appearance," from ad "to" (see ad-) + parere "to come forth, be visible; submit, obey," which is of uncertain origin; de Vaan says from a PIE *prh-o- "providing."

Of persons, "present oneself," late 14c. The meaning "seem, have a certain appearance" is late 14c. Related: Appeared; appearing.

Noun meaning "that which is sudden, a sudden need or emergency" is from 1550s, obsolete except in phrase all of a sudden first attested 1680s, also of a sudayn (1590s), upon the soden (1550s). Sudden death, tie-breakers in sports, first recorded 1927; earlier in reference to coin tosses (1834). Related: Suddenness.
Related entries & more