"depravity, infamy, inherent baseness or vileness," late 15c., from Old French turpitude (early 15c.), from Latin turpitudinem (nominative turpitudo) "baseness," from turpis "vile, foul, physically ugly, base, unsightly," figuratively "morally ugly, scandalous, shameful," a word of uncertain origin. De Vaan finds proposed connections to IE words meaning "to turn" (via the notion of "to turn away") as "too constructed" to be credible. Klein suggests perhaps originally "what one turns away from" (compare Latin trepit "he turns"). 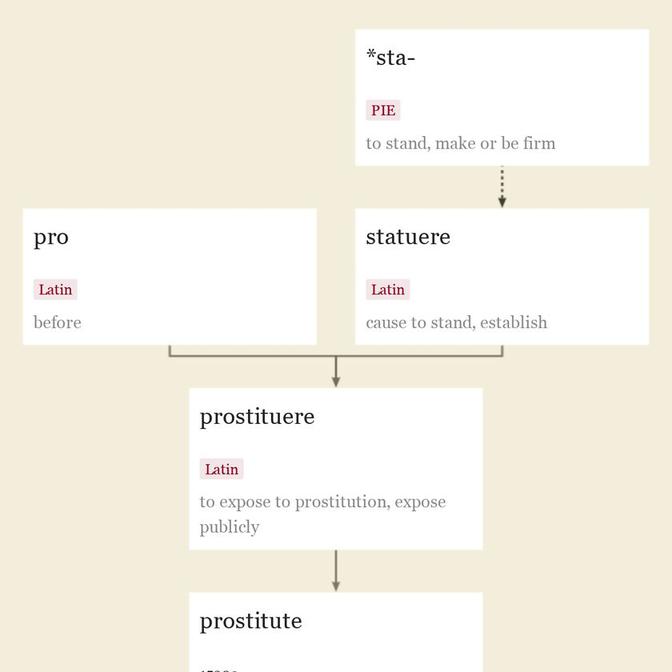 1520s, "to offer to indiscriminate sexual intercourse" (usually in exchange for money), from Latin prostitutus, past participle of prostituere, etymologically "place before or in front," hence "expose publicly," and especially "expose to prostitution."

This is from pro "before" (see pro-) + statuere "cause to stand, establish" (from PIE root *sta- "to stand, make or be firm"). Related: Prostituted; prostituting. Figurative sense of "surrender to any vile or infamous purpose" (of abilities, etc.) is implied from 1570s.

1650s (n.) "member of the lowest or poorest class of a community;" 1660s (adj.) "of or belonging to the lowest class of people," hence "mean, vile, vulgar;" with -ian + Latin proletarius "citizen of the lowest class" (as an adjective, "relating to offspring"), from proles "offspring, progeny" (see prolific). In ancient Rome, according to the traditional division of the state, the proletarius was one of the propertyless people, exempted from taxes and military service, who served the state only by having children. The modern political sense of proletarian is by 1851.

mid-15c., "small box for jewels, etc.," possibly a diminutive of English cask with -et, or from a corruption of French casset "a casket, a chest" (see cassette). Also a publisher's name for a collection of selected literary or musical pieces (1828). Meaning "coffin" (especially an expensive one) is American English, probably euphemistic, attested by 1832.

Thank Heaven, the old man did not call them "CASKETS!"—a vile modern phrase, which compels a person of sense and good taste to shrink more disgustfully than ever before from the idea of being buried at all. [Hawthorne, "Our Old Home," 1862]

Twenty five years ago the vile ejaculation "Bah!" was utterly unknown to the English public. Now, and entirely through the currency given to it by our own novels, it has become the most popular expression for dismissing with contempt any opinion or suggestion of the person with whom you are conversing. Sir Edward Lytton was amongst the earliest and deepest offenders. ["French and English Manners," 1850]

An earlier form in Middle English was infame (late 14c.), from Old French infame, an earlier form of infamie. Infame also was the Middle English verb in this set, "brand with infamy," from Old French infamer, from Latin infamare "bring into ill repute, defame," from infamis. The verb has become archaic in English (infamize is attested from 1590s).
Related entries & more