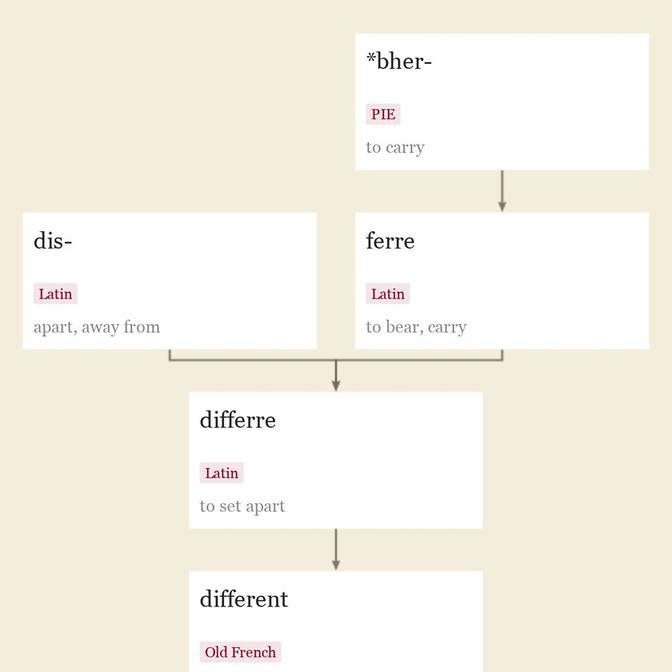 late 14c., "not the same, unlike, dissimilar in nature or quality as well as state of being," from Old French different (14c.), from Latin differentem (nominative differens) "differing, different," present participle of differre "to set apart," from assimilated form of dis- "apart, away from" (see dis-) + ferre "to bear, carry," from PIE root *bher- (1) "to carry." Colloquial sense of "special, out of the ordinary" is attested by 1912. Related: Differently.

Form altered apparently by influence of resemble, Old French resembler. Earlier was Middle English dissimule, from Old French dissimuler. Transitive meaning "make unlike, disguise" is from c. 1500; that of "give a false impression of" is from 1510s.

To dissemble is to pretend that a thing which is is not: as, to dissemble one's real sentiments. To simulate is to pretend that a thing which is not is: as, to simulate friendship. To dissimulate is to hide the reality or truth of something under a diverse contrary appearance: as, to dissimulate one's poverty by ostentation. To disguise is to put under a false guise, to keep a thing from being recognized by giving it a false appearance: as I cannot disguise from myself the fact. [Century Dictionary]

"raised open platform at the entrance of a house," 1755, American and Canadian, from Dutch stoep "flight of steps, doorstep, threshold," from Middle Dutch, from Proto-Germanic *stap- "step" (see step (v.)).

This, unlike most of the words received [in American English] from the Dutch, has extended, in consequence of the uniform style of building that prevails throughout the country, beyond the bounds of New York State, as far as the backwoods of Canada. [Bartlett]

late 14c., dissimulacioun, "concealment of reality under a diverse or contrary appearance," from Old French dissimulation (12c.) and directly from Latin dissimulationem (nominative dissimulatio) "a disguising, concealment, dissembling," noun of action from past-participle stem of dissimulare "make unlike, conceal, disguise," from dis- "not, opposite of" (see dis-) + simulare "to make like, imitate, copy, represent," from stem of similis "like, resembling, of the same kind," from Old Latin semol "together" (from PIE root *sem- (1) "one; as one, together with").

Related entries & more
black sheep (n.)
by 1822 in figurative sense of "member of some group guilty of offensive conduct and unlike the other members," supposedly because a real black sheep had wool that could not be dyed and thus was worth less. But one black sheep in a flock was considered good luck by shepherds in Sussex, Somerset, Kent, Derbyshire. First known publication of Baa Baa Black Sheep nursery rhyme is in "Tommy Thumb's Pretty Song Book" (c. 1744).
Related entries & more
millipede (n.)

also millepede, type of many-legged hard-shelled arthropod, c. 1600, from Latin millepeda "wood louse," a type of crawling, insect-like arthropod, from mille "thousand" (see million) + pes (genitive pedis) "foot," from PIE root *ped- "foot." Probably a loan-translation of Greek khiliopous. The native name is thousand-legs. The number of legs is far from 1,000, though they are about twice as numerous as those of the centipede, but unlike some centipedes the millipede is quite harmless.