—What next? Among the new patents announced is one to Adolphus Theodore Wagner, of Berlin, in the kingdom of Prussia, professor of music, for the invention of a "psychograph, or apparatus for indicating a person's thoughts by the agency of nervous electricity." [Arthur's Home Magazine, May 1854]

Related entries & more
grippe (n.)
"epidemic influenza," 1776, probably from French grippe "influenza," originally "seizure," verbal noun from gripper "to grasp, hook," from Frankish or another Germanic source, from Proto-Germanic *gripanan (see grip (v.), gripe (v.)). Supposedly in reference to constriction of the throat felt by sufferers; the word spread through European languages after the influenza epidemic during the Russian occupation of Prussia in the Seven Years' War (c. 1760), and Russian chirpu, said to be imitative of the sound of the cough, is sometimes said to be the origin or inspiration for the word.
Related entries & more
hegemony (n.)

1560s, "preponderance, dominance, leadership," originally of predominance of one city state or another in Greek history; from Greek hēgemonia "leadership, a leading the way, a going first;" also "the authority or sovereignty of one city-state over a number of others," as Athens in Attica, Thebes in Boeotia; from hēgemon "leader, an authority, commander, sovereign," from hēgeisthai "to lead," perhaps originally "to track down," from PIE *sag-eyo-, from root *sag- "to seek out, track down, trace" (see seek). In reference to modern situations from 1850, at first of Prussia in relation to other German states.

1926, "a German seeking to avenge Germany's defeat in World War I and recover lost territory," on model of French revanchiste, which had been used in reference to those in France who sought to reverse the results of the defeat of France by Prussia in 1871 (which was accomplished by World War I).

Related entries & more
Advertisement
Hessian (n.)
"resident of the former Landgraviate of Hessen-Kassel," western Germany; its soldiers being hired out by the ruler to fight for other countries, especially the British during the American Revolution, the name Hessians by 1835 in U.S. became synonymous (unjustly) with "mercenaries." Hessian fly (Cecidomyia destructor) was a destructive parasite the ravaged U.S. crops late 18c., so named 1787 in erroneous belief that it was carried into America by the Hessians.

The place name is from Latin Hassi/Hatti/Chatti, the Latinized form of the name of the Germanic people the Romans met in northern Germany (Greek Khattoi). The meaning of the name is unknown. Part of Arminius's coalition at the Battle of Teutoburger Wald (9 C.E.), they later merged with the Franks. They are mentioned in Beowulf as the Hetwaras. The state was annexed to Prussia in 1866 and is not to be confused with the Grand Duchy of Hesse-Darmstadt.
Related entries & more
Teutonic (adj.)
1610s, "of or pertaining to the Germanic languages and to peoples or tribes who speak or spoke them," from Latin Teutonicus, from Teutones, Teutoni, name of a tribe that inhabited coastal Germany near the mouth of the Elbe and devastated Gaul 113-101 B.C.E., probably via Celtic from Proto-Germanic *theudanoz, from PIE root *teuta- "tribe."

Used in English in anthropology to avoid the modern political association of German; but in this anthropological sense French uses germanique and German uses germanisch, because neither uses its form of German for the narrower national meaning (compare French allemand, for which see Alemanni; and German deutsch, under Dutch). In Finnish, Germany is Saksa "Land of the Saxons."

The Teutonic Knights (founded c.1191) were a military order of German knights formed for service in the Holy Land, but who later crusaded in then-pagan Prussia and Lithuania. The Teutonic cross (1882) was the badge of the order.
Related entries & more
holy (adj.) 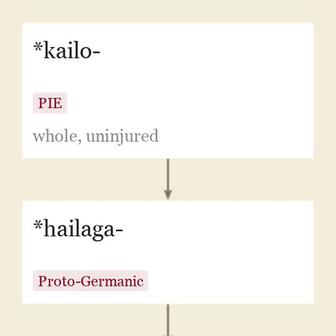 The primary (pre-Christian) meaning is not possible to determine, but probably it was "that must be preserved whole or intact, that cannot be transgressed or violated," and connected with Old English hal (see health) and Old High German heil "health, happiness, good luck" (source of the German salutation Heil). Holy water was in Old English.

Holy is stronger and more absolute than any word of cognate meaning. That which is sacred may derive its sanction from man ; that which is holy has its sanctity directly from God or as connected with him. Hence we speak of the Holy Bible, and the sacred writings of the Hindus. He who is holy is absolutely or essentially free from sin; sacred is not a word of personal character. The opposite of holy is sinful or wicked; that of sacred is secular, profane, or common. [Century Dictionary, 1895]