c. 1400, "actually, in fact, in a real manner," originally in reference to the presence of Christ in the Eucharist, "substantially," from real (adj.) + -ly (2). The general sense is from early 15c. Purely emphatic use dates from c. 1600, "indeed," sometimes as a corroboration, sometimes as an expression of surprise or a term of protest; interrogative use (as in oh, really?) is recorded from 1815. 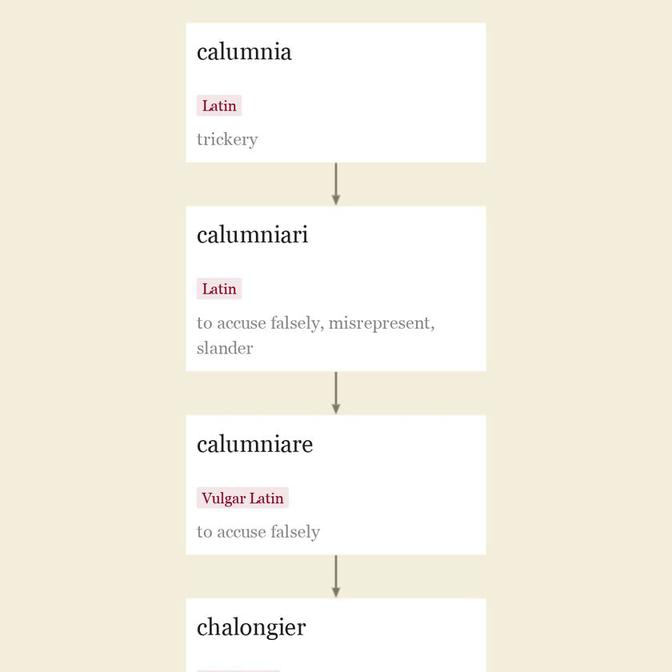 From late 13c. as "to object to, take exception to;" c. 1300 as "to accuse," especially "to accuse falsely," also "to call to account;" late 14c. as "to call to fight." Also used in Middle English with sense "claim, take to oneself." Related: Challenged; challenging.

Related entries & more
lockout (n.)
also lock-out, "act of excluding from a place by locking it up," especially of management locking out workers in labor disputes (1854) but also in 19c. the exclusion of a teacher from the schoolhouse by his pupils as an act of protest. From the verbal phrase lock (someone) out, which is attested from mid-14c. in the sense "turn or keep out (of a place), bar the doors against" (see lock (v.) + out (adv.)).
Related entries & more
reclamation (n.)

late 15c., reclamacion, "a revoking" (of a grant, etc.), from Old French réclamacion and directly from Latin reclamationem (nominative reclamatio) "a cry of 'no,' a shout of disapproval," noun of action from past participle stem of reclamare "cry out against, protest" (see reclaim). From 1630s as "action of calling (someone) back" (from iniquity, etc.); meaning "action of claiming as a possession something taken away" is from 1787. Of waste land from 1848; the notion is "action of subduing to fitness or use;" of used or waste material or objects, by 1937.

"telegraphic dispatch," according to Bartlett's 1859 edition a coinage of E. Peshine Smith of Rochester, N.Y., from tele-, as in telegraph + -gram, and introduced in the Albany "Evening Journal" of April 6, 1852. Damned in the cradle by purists who pointed out that the correct formation would be telegrapheme (which is close to the Modern Greek word).

May I suggest to such as are not contented with 'Telegraphic Dispatch' the rightly constructed word 'telegrapheme'? I do not want it, but ... I protest against such a barbarism as 'telegram.' [Richard Shilleto, Cambridge Greek scholar, in the London Times, Oct. 15, 1857]

Dutch rumoer, German Rumor are from French. The sense of "loud protest, clamor, outcry" also was borrowed in Middle English but is now archaic or poetic. Also compare rumorous "making a loud, confused sound" (1540s). Rumor-monger is by 1884 (earlier in that sense was rumorer, c. 1600). The figurative rumor mill is by 1887.

"state of being a Protestant; religious principles of Protestants," 1640s, from French protestantisme or else formed from Protestant + -ism. Meaning "Protestant Christians or churches" is from 1660s.

late 14c., excepcioun, "act or fact of leaving out or the excluding of" from the scope of some rule or condition, from Anglo-French excepcioun (late 13c. in a legal sense, "formal objection or protest entered by a defendant"), Old French excepcion, from Latin exceptionem (nominative exceptio) "an exception, restriction, limitation; an objection," noun of action from past-participle stem of excipere "to take out" (see except).

From c. 1400 as "a reservation or exemption;" from late 15c. as "something that is excepted."  The exception that proves the rule is from law: exceptio probat regulam in casibus non exceptis, "the exception proves the rule in cases not excepted;" exception here being "action of excepting" someone or something from the rule in question, not the person or thing that is excepted. The figure of speech in to take exception "find fault with, disapprove" is from excipere being used in Roman law as a modern attorney would say objection.

late 14c., renouncen, "give up (something, especially to another), resign, surrender," from Old French renoncier "give up, cede" (12c., Modern French renoncer) and directly from Latin renuntiare "bring back word; proclaim; protest against, renounce," from re- "against" (see re-) + nuntiare "to report, announce," from nuntius "messenger" (from PIE root *neu- "to shout").

The sense of "abandon, discontinue" (a habit, practice, etc.) is from late 15c.. That of "disclaim relationship with or allegiance to" a person is by c. 1500. That of "to abandon or give up" a belief, opinion, etc. by open recantation, declare against" is from 1530s. Related: Renounced; renouncing; renouncement.

Renounce, to declare strongly, with more or less of formality, that we give up some opinion, profession, or pursuit forever. Thus, a pretender to a throne may renounce his claim. Recant, to make publicly known that we give up a principle or belief formerly maintained, from conviction of its erroneousness ; the word therefore implies the adoption of the opposite belief. [Century Dictionary]

early 14c., reclaimen, "call back a hawk to the glove," from Old French reclamer "to call upon, invoke; claim; seduce; to call back a hawk" (12c., Modern French réclamer) and directly from Latin reclamare "cry out against, contradict, protest, appeal," from re- "opposite, against" (see re-) + clamare "cry out" (from PIE root *kele- (2) "to shout").

"Call out; call back a hawk," hence "make tame" (mid-15c.), "subdue, reduce to obedience, make amenable to control" (late 14c.). Many Middle English senses lack an apparent notion of return or reciprocation (not unusual with Middle English re- words). Meaning "revoke" (a grant, gift, etc.) is from late 15c. That of "recall (someone) from an erring course to a proper state" is from mid-15c.

The sense of "get back by effort" might reflect influence of claim. The specific meaning "bring waste land into useful condition fit for cultivation" is attested by 1764, probably on notion of "reduce to obedience" (perhaps from the image of taming wild animals) rather than a suggestion of a return to a previous condition. Related: Reclaimed; reclaiming.